Shale oil and gas deposits have cast energy-related site selection and
the oil and gas supply chain in a new light. It now turns its transformative power
to inland logistics and transportation networks.

Above: BNSF 6705 eastbound at Tagus, N.D., on Hi Line main with a full load from EOG Resources at Stanley, N.D.
Photo by Steve Crise
by CHARLOTTE BATSON
I

t was only a matter of time. The flood of newly abundant resources from shale, shale oil and gas has worked its way through the upstream, midstream and downstream sectors, and is now making its presence known in logistics and transportation, transforming the inland networks of the U.S. in turn. Shale plays around the country are requiring mass quantities of commodities and equipment that must be transported by rail or highway. The thousands of wells being drilled in places ranging from Pennsylvania and Ohio in the northeast to Mississippi and Louisiana in the south, to North Dakota and Wyoming in the west (see map on page 64) require extensive resources to drill and produce. Millions of tons of sand, equipment, chemicals and other components of the supply chain are crisscrossing the country to get from supplier to field locations.

Logistics and transportation costs play a critical role in the economics of oil and gas development. Despite the explosion of business in oil and gas, industry leader Baker Hughes reported a drop of 6 percent in their profit for the 4th quarter of 2011, citing shortages of materials and difficulty in getting equipment and materials to job sites.

Products — oil, gas and condensate produced in abundance — must be transported from production locations to downstream processing facilities and from there to markets and end users. U.S. oil production has already increased nearly 750,000 barrels per day since its lowest point in 2006, and Harvard now estimates that shale oil will catapult the U.S. into the world's No. 2 spot in oil production capacity (second only to Saudi Arabia) at 11.6 million barrels per day by 2020. This would surpass the previous peak of just under 10 million barrels per day set in the early 1970s. So much for "peak oil." 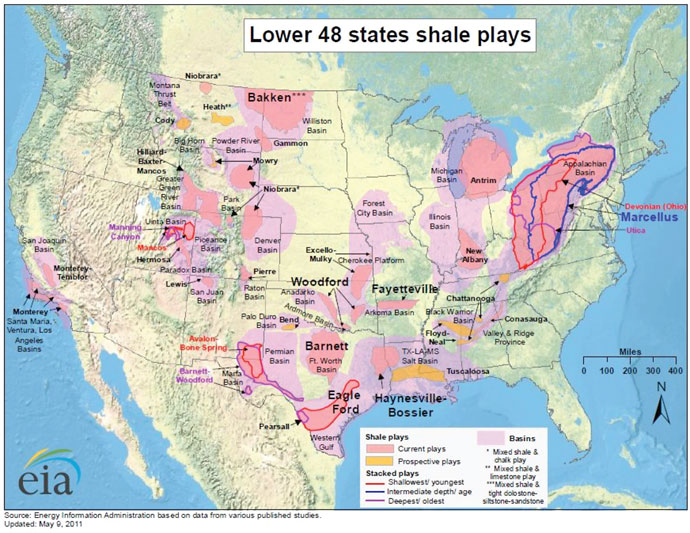 In short, these supply-chain items are in demand in never-before-seen quantities, and are required for locations in which they've never been needed. Similarly, the production is originating in regions that have never generated this scale of production, and must be transported to markets that these regions have never served before. Pipeline is by far the lowest-cost transportation method for oil, gas, refined products, chemicals and so on. However, pipeline construction can't keep up with production due to the long lead times, and in any case, pipelines are not a practical solution in many areas, because the life of individual wells may not justify the investment or support the long-term production volume commitments. Given the current gluts of oil and natural gas in the play locations, the ability to supply the resource-intensive operations and get the produced commodities to market quickly is driving these innovative logistics solutions and infrastructure development.

Class I and short-line rail, trucks and intermodal make up the new "flexible pipeline" for inbound supplies and outbound production to terminals or processing facilities. Inland waterways and their proximity to other transportation infrastructure, production, and downstream processing facilities play an increasingly important role as well. As a result, the rail sector is booming, manufacturing of rail equipment is booming, new types of facilities are springing up, and the Mississippi-Ohio River corridor is being revitalized. These shifts have been recognized by corporate America, which is adjusting accordingly. GE Transportation recently announced that its new global headquarters for rail, mining and marine industries will be located in Chicago. This shift recognizes the new reality of transportation and logistics for oil and gas.

The rail industry has faced declining activity since 2009, as a result of declining use of coal (its primary cargo) in power generation. And yet, Class I railroads including CSX, UP, Norfolk Southern, BNSF, Kansas City Southern and CN have all announced double-digit profit growth in 2012. UP just announced a record $1 billion in net income for the second quarter 2012, and has invested up to $2 million per mile refurbishing its rail lines, as have other railroads. Furthermore, employment in the trucking sector has increased by 8 percent since its low of just fewer than 1.25 million jobs in early 2010, despite a persisting driver shortage.

The significant new transportation demand requires increased capacity. The "flexible pipeline" is increasingly the mode of choice for shale oil and gas operations, especially for remote locations. More economical than truck and more flexible than pipelines, it serves a dual purpose for both inbound and outbound freight as sand, chemicals and equipment are transported to the drilling sites and the resulting oil, natural gas liquids and natural gas (as LNG) production is transported from the wells to processing facilities and markets. Perhaps more importantly, it allows the oil companies the flexibility to respond quickly to regional crude oil price variations and seek out the highest-price markets or refineries.

Drilling shale oil and gas wells is a resource-intensive operation. Each of the hundreds of wells to be drilled in the Bakken Shale, for example, requires approximately 23 inbound carloads of supplies and materials. Sand, in particular, is a transportation growth driver because of the tremendous volumes needed and the weight of the commodity involved. The average "frac job" requires one million pounds of sand or other proppants. Estimates of the frac sand market in 2011 are as high as 21.7 million tons, and forecast to increase by at least 30 percent in 2012.

But not all sand is frac sand. In fact, most sand does not meet the specifications required for use in hydraulic fracturing. The highest quality frac sand is quarried in Wisconsin, and other quarries are located in Arkansas, Minnesota, Iowa, Louisiana, Illinois, Missouri and elsewhere. After being mined it must be transported to the Tuscaloosa, the Bakken, the Utica, the Eagle Ford and other play locations of interest.

"Rail not only provides the more flexible and economic option to ship crude oil to destination markets," says Dave Garin, BNSF group vice president, industrial products, "it also has the capacity to carry the inbound materials and to grow with shale production, one of the nation's fastest growing new sources of energy. That's good for jobs and our economy."

As a result, new facilities, frequently located adjacent to rail lines, are needed for handling and storage. Smart Sand and Canadian Pacific have partnered to supply the Bakken, Eagle Ford, Utica and Marcellus Shales with Wisconsin frac sand. Their first facility will be a new transload facility, expected to be the region's largest, in Makoti, N.D., that will begin operations in early 2013. Smart Sand's facility in Oakdale, Wis., which opened in late June 2012, has a processing capacity of more than 1 million tons per year. BNSF is partnering with US Silica Holdings to build a sand-storage facility near San Antonio that can store 15,000 tons of sand for use in the Eagle Ford Shale. The facility will receive 30,000-40,000 tons per month of sand on 100-car trains beginning in 2013.

The "flexible pipeline" outbound, crude by rail, is having at least as much of an impact on railroads' bottom lines as are inbound supplies. BNSF owns the largest market share in transportation of petroleum products, and the company's carloadings increased by 60 percent in the first half of 2012. The number of tanker cars transporting petroleum products increased by 38 percent in the first half of 2012 over the same period in 2011, in unit trains that can transport up to 85,000 barrels per trip. As many as 17 facilities have been built in North Dakota since 2008 to handle crude to rail, and the state's capacity increased by 55 percent in June 2012 alone to 470,000 barrels per day. Further increases to 710,000 barrels per day are expected by the end of 2012, and destinations include Stroud, Okla.; Bakersfield, Calif.; St. James, La.; and Texas.

Because oil production from North Dakota's Bakken shale wells is expected to exceed 1 million barrels per day within three years, there is still room for growth in this region alone. Canadian Pacific is investing $100 million to expand its Bakken crude transportation with a new logistics hub under development at Van Hook, N.D., with initial capacity of 35,000 barrels per day that will join a nationwide network of rail-served crude terminals.

KCS has announced a partnership with Savage Co. to develop the Port Arthur Crude Terminal (PACT) in Port Arthur, Texas, another rail terminal and storage facility. The railroad anticipates that Texas in general and Port Arthur in particular will develop into a significant market for Bakken crude oil. KCS is also exploring the potential of other markets, including Corpus Christi and Mexico. 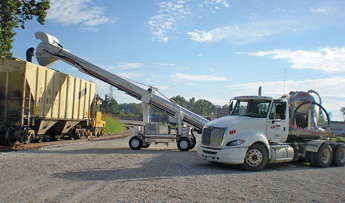 An important component of the new "flexible" pipeline is the "first mile — last mile" transport of short-line rail. Norfolk Southern has partnered with 18 short-line railroads, one of which, the Buffalo & Pittsburgh Railroad (BPRR), has seen a 180-percent increase in Marcellus Shale-related supplies. Genesee & Wyoming Inc. (GWI), the owner of the BPRR and one of the two largest short-line or regional railroads in North America, recently acquired RailAmerica Inc. (the other one) for $1.39 billion in cash. GWI, now with 111 railroads, has stated that the Marcellus Shale is one of the company's top three growth markets. GWI has located 14 transload facilities in the Marcellus region to handle a variety of commodities and is prepared to add as many as eight more if additional demand materializes.

Kinder Morgan, having just completed its merger with El Paso, is partnering with Watco (the largest privately held U.S. shortline railroad) to develop a multi-commodity rail terminal in Pecos, Texas, in addition to crude to rail transloading facilities in Texas, North Dakota, and Oklahoma. The Pecos terminal would allow as many as 600 cars per day to be loaded with liquids production going outbound, and frac sand, tubulars, and other supplies inbound to be transferred to trucks for delivery in the local area. Watco, which moved 20 million barrels of crude oil in 2011, has also partnered with BNSF to move Bakken crude from North Dakota to Oklahoma, and is evaluating the market potential for Houston, St. James, and Patoka, Ill.

A recent study by PriceWaterhouse-Coopers estimates that shale oil and gas development will create 1 million new manufacturing jobs by 2025. As a result of this infrastructure expansion, manufacturing of some types of rail equipment is booming. The cube hoppers used for transporting frac sand (and grain for ethanol); tank cars for oil, water or chemicals, and intermodal equipment in particular are seeing strong growth. Phillips 66 has ordered 2,000 tank cars to transport Bakken oil, increasing delivery of crude oil to their refineries by as much as 150,000 bpd within the next two years. In 2011, CSX bought about 900 cube hoppers. Norfolk Southern will spend a portion of its planned $346 million in 2012 capital investment on freight cars, and Tesoro has ordered 800 tanker cars.

Economic Planning Associates (EPA) estimates that railcar manufacturers have received orders for more than 89,000 rail cars — the highest level since tracking began in 1980. Deliveries are expected to increase from 58,000 units in 2012 and stabilize at more than 64,000 units annually over the next five years. Due to lack of manufacturing capacity, the unit prices are up, and there are some indications that manufacturers may even be selective on the orders they take.

BNSF 6705 backing on to main line with a full load at EOG Resources, Stanley, N.D.
Photo by Steve Crise