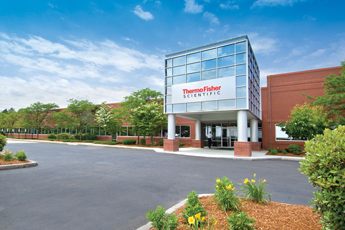 Technology companies like to
be close to the talent pipeline. 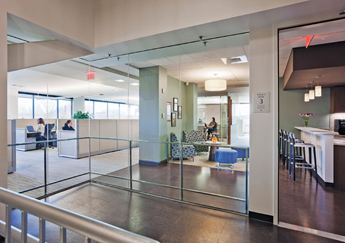 taying close to the supply chain of skills guided recent expansion and consolidation location decisions for at least three technology companies in the northern Boston suburbs.

Thermo Fisher Scientific wanted to ensure it retained its key employees when it sought to consolidate some of its Massachusetts operations into a new center of excellence. The company chose Tewksbury, just east of Lowell, as the site of a new facility that combines operations previously located in nearby Billerica and Wilmington.

Dan Shine, president of Thermo Fisher Scientific's chemical analysis division, says the company constrained its geographic search as it looked for a site to consolidate its portable and analytic instruments line.

"Based on our search of the area, Tewksbury came to the forefront," Shine says. "The town was very good to work with on permitting issues.

"When we look at the roots of the business, we have an exciting production line which is part of a $12-billion company and have one of the fastest-growing technologies in the company," Shine says. "We take laboratory technology and put it in people's hands in devices like smart phones."

The handheld devices save considerable time in analyzing shipments of raw materials for customers, including companies in the pharmaceutical and chemical industries, Shine says.

The consolidation brings together about 400 employees involved in R&D, manufacturing, marketing and sales. The company forecasts adding 100 employees over the next five years if it meets its growth projections.

There are now more than 1,400 Thermo Fisher employees in Massachusetts. In addition to its global corporate headquarters in Waltham, businesses in the Commonwealth include Environmental and Process Monitoring in Franklin; Water Analysis Instruments in Beverly; and the BRIMS Center in Cambridge, which provides applications assistance in biomarker discovery and validation. 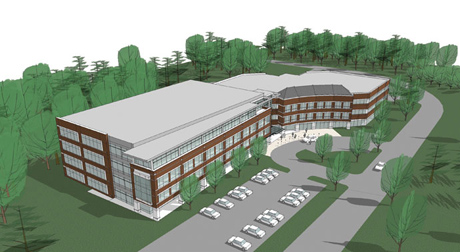 Red Hat elected to expand its engineering operations in Westford rather than relocate to company facilities in California or North Carolina. The expansion is the rectangle-shaped structure in the foreground.
Image courtesy of Red Hat

Raleigh, N.C.-based Red Hat, the global provider of open source software, is undertaking a major expansion of its engineering operations in Westford, a few miles west of Lowell. The company recently broke ground on a 100,000-sq.-ft. (9,900-sq.-m.) building next to its current 75,000-sq.-ft. (6,967-sq.-m.) structure. The company elected to stay put after considering a possible move of the engineering center to one of its locations in North Carolina or Silicon Valley.

"Westford is one of our major engineering hubs and we have some high-ranking individuals located there," says Matt Moon, Red Hat's manager of project management. "We are investing in our major offices globally. It's a great area to be in with lots of schools and universities where we can develop great talent. We looked at available options, but from both a financial and a personnel sense it made sense to stay right where we are."

The Commonwealth of Massachusetts helped the financial end of the equation by designating the site in Westford Technology Park West an Exceptional Opportunity Area, and the Town of Westford was able to offer tax increment financing estimated at $927,000. Massachusetts' Economic Assistance Coordinating Council (EACC) approved tax credits valued at $3,397,500. 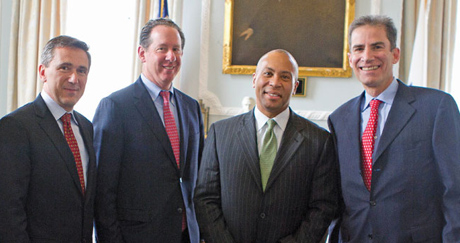 Moon says the location north of Boston not only puts the company in position to attract talent from the major Boston-area schools, but also from universities in New Hampshire and Vermont. Red Hat currently employs more than 300 in Westford, and the new building will have capacity for 350 more. The expansion is part of a global hiring spurt by the company that will add 1,000 people across all of its locations.

Red Hat hopes to achieve LEED-Gold status for the new Westford building. Moon says Red Hat opts to lease its facilities as part of its sustainability program in order to reduce environmental impact.

Just a few miles south in Bedford, Entegris, a Billerica-based supplier to the semiconductor and microelectronics industries, will create the Entegris i2M Center for Advanced Materials Science (i2M stands for "ideas to market"). The company says the facility will be one of New England's leading R&D and manufacturing centers for technologies needed to develop critical components for semiconductor manufacturing.

Entegris' products, which control nano-level contamination so small it is measured in widths of atoms, enable the production of advanced semiconductor devices and other electronics used in computers, smartphones, TVs and cars.

Entegris purchased land and an existing 80,000-sq.-ft. (7,432-sq.-m.) building to house the facility. It expects to invest approximately $45 million to $50 million in building infrastructure upgrades and equipment over the next two years. Entegris expects the first phase to be operational in 2013. The facility will house 100 employees consolidated from other Massachusetts locations and will add 10 new positions.

Entegris spokesman Steve Cantor says the company chose the Bedford site because of its proximity to the three area facilities from which employees will be consolidated. It will bring together three existing Massachusetts operations: the Entegris Specialty Coatings business, currently operating from a leased facility in Burlington; the advanced membrane manufacturing operations currently at a leased facility in Bedford; and the company's advanced membrane development unit currently based at the company's headquarters in Billerica. 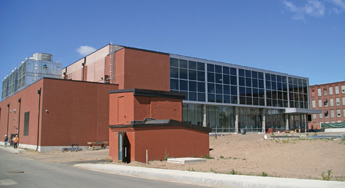 State and local officials hope that a new collaborative data center with a big name has an equally big impact on the economy of the Holyoke area. The Massachusetts Green High Performance Computing Center (MGHPCC) is a collaboration of five of the state's most research-intensive universities, state government and private industry. Boston University, Harvard University, MIT, Northeastern University and the University of Massachusetts are the participating schools.

Construction of the center began in 2010 and will be completed by the end of this year. The facility's estimated cost of $95 million will be funded by the five universities, state government, the Federal New Markets Tax Credit Program, EMC Corp. (based in Hopkinton, Mass.) and Cisco Systems.

John Goodhue, executive director of the MGHPCC, says it is part of a larger economic development plan for the city and region. The facility is being built on a former industrial site in the city that is being redeveloped as an innovation district.

"It is in an area that has had serious economic challenges for decades," Goodhue says. "It's an anchor tenant for the innovation district and the first large new development in literally decades. We have transformed a site that before we came had a building on it that was functional, but was in serious disrepair, and we have replaced that building with a new environmentally efficient building and grounds. We have transformed the face of the place, and that has made it more attractive for businesses to locate."

The data center won't generate a lot of on-site jobs — about 10 full-timers — but Massachusetts officials estimate 130 research jobs will be created among the partner universities. Goodhue says a major reason Holyoke was selected for the facility is its relatively inexpensive electric power.

"The local municipal power company [Holyoke Gas & Electric] has a hydroelectric facility that keeps power costs down," Goodhue says. "It's also attractive because of the green source of power."

Another advantage of Holyoke, Goodhue says, is its proximity to a major fiber crossroads with large bundles of fiber-optic communications. Goodhue says the center's purpose is to support computational research heretofore conducted at the individual universities, which have capacity limitations for this type of research.

"Moving computers to a central location frees up space on campus and allows universities to operate computers in ways that are more efficient," Goodhue says. "All five are facing this problem. This way they get economies of scale. It's an unusual collaboration, but it will become more commonplace over time."

The 90,000-sq.-ft. (8,361-sq.-m.) building has been designed to be both environmentally friendly and energy-efficient. Goodhue says the facility aims to achieve LEED-Gold status, a rare feat for a data center. Space has been set aside for users outside of the initial partner universities. Goodhue expects other universities in New England to use the facility. And there is room on the 8.5-acre (3.4-hectare) site for a similarly sized building if the need arises for expansion. The infrastructure is in place for a second building, he says.

Outside air will be used to support cooling about 70 percent of the year, minimizing energy usually used by running chillers and resulting in huge energy savings, Goodhue says.