Infill often fills the bill for companies ready to get growing.

Rolls-Royce opened its Crosspointe plant in 2009 in Prince George County.
Photo courtesy of Rolls-Royce
by ANN MOLINE
I 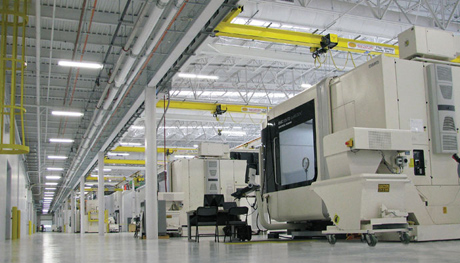 Rolls-Royce, whose Crosspointe plant’s rotatives floor is shown here, is in the final planning stages for an expansion that will house an advanced blade machining facility.
Photos courtesy of Rolls-Royce

n post-recession America, speed to project completion, in addition to cost and operational efficiencies, is what's driving many a location decision, a trend playing out throughout the Mid-Atlantic region.

Firms in search of more space are eyeing existing buildings that can be retrofitted quickly, easily and cost-effectively. If they can't find a facility to suit their needs, they want shovel-ready sites that don't require a lengthy permitting process.

"When firms are ready to grow, they are ready to go," says veteran location consultant Dennis Donovan, a principal of Wadley-Donovan-Gutshaw Consulting. "They don't want to be slowed down by lengthy construction timelines or bureaucratic hurdles like permitting delays," he says.

The Mid-Atlantic is seeing an uptick in location-related activity, much of it with existing buildings rather than greenfield development, Donovan says. "The whole region is doing well, and continues to be among the most desirable locations in the country. States have made solid investments in infrastructure and education. They have pro-business climates and competitive incentives."

In fact, from an overall job creation perspective, several metros in the region are outperforming the nation as a whole, including the D.C. metro area, Richmond and Baltimore (see chart).

Aerospace is one of several growth industries that like the Mid-Atlantic, according to Donovan. "There's access to ports, rail and roadways. They aren't far from suppliers or customers, particularly companies that have U.S. military customers," he says.

One such firm that has found a comfortable home in the region is Rolls-Royce. The company's North American regional headquarters is in Reston, Va. In 2009, it opened an aircraft engine components manufacturing plant on a 1,000-acre (405-hectare) site called Crosspointe, just outside of Richmond in Prince George County.

Already the company's largest North American facility, Crosspointe is preparing for more growth. "We are in the final stages of planning a 90,000-sq.-ft. [8,361-sq.-m.] expansion on this site, to house an advanced blade machining facility," says a Rolls-Royce spokesperson. "The same factors that led us to Virginia in the first place remain in play today. We have access to a deepwater port, and there are good rail and highway connections. We have great relationships with the state and local governments. And we have access to top research talent to solve critical manufacturing challenges." 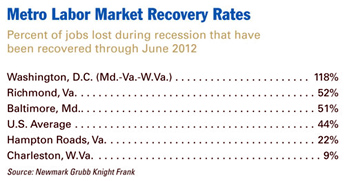 Other states in the region are benefiting from the aerospace boom as well, with firms such as Philadelphia-based MAG, Inc. citing the availability of existing structures as a factor in their location decisions. MAG selected Maryland's Hagerstown Regional Airport for its new helicopter and fixed wing maintenance, repair and overhaul facility because it could use an existing 17,000-sq.-ft. (1,579-sq.-m.) hangar to house operations, company officials said in a press release.

With economic indicators suggesting that consumers, after several years of restraint, are opening up their wallets a little wider to buy goods, retailers are scrambling to keep up, especially as the popularity of online shopping continues to grow.

"Retailers are trying to shorten the time between online customer orders and delivery fulfillment," Donovan says. "To do this, you need more distribution centers located in closer proximity to your customers."

The Mid-Atlantic is a prime focus for this strategy, based on recent activity. The company has invested $225 million in three new facilities in the region: two in Virginia and one in Delaware, adding to its existing inventory of warehouses in the region. Amazon also opened facilities in Kentucky, Tennessee and South Carolina during this same time frame.

While some industry insiders speculate that the fulfillment center spree is aimed at expanding Amazon's same-day delivery service, currently offered on selected goods in the East Coast's major metros of D.C., Baltimore, Philadelphia, New York and Boston, among other big city markets, company officials say this isn't so. "We don't see a way to do same-day on a broad scale, economically," Szkutak said on the call.

Other retailers are expanding their distribution networks in the region as well. In July, Macy's opened the doors of its $150-million, 1.3-million-sq.-ft. (120,770-sq.-m.) distribution center in Martinsburg, W.Va, to support online orders from East Coast customers of Macy's and Bloomingdale's. And in July, Ace Hardware opened its Import Redistribution Center at the new 900-acre (364-hectare) CenterPoint Intermodal Center in Suffolk, Va. The center will handle international goods arriving at the Port of Virginia and redistribute them to eight Ace Hardware Retail Support Centers in Texas and the eastern U.S.

With demand up for energy of all kinds, energy companies are in growth and acquisition mode, tapping into regional resources to make their expansions happen.

In Delaware, PBF Energy Holdings announced a massive $1-billion dollar investment to build a green hydrogen plant at its Delaware City Refinery, which will reduce sulfur dioxide emissions and enable the production of clean transportation fuels.

Firms are jockeying for position as technological advances make drilling for these resources more feasible.

Dominion Resources is part of the West Virginia shale action as well. The company — a major energy player in the Mid-Atlantic — is building a $500-million natural gas processing plant in Natrium and a pipeline to transport gas to the plant from West Virginia and Pennsylvania shale wells.

Dominion has also beefed up its energy production capacity in the region, as power demand continues to grow. In July, Dominion opened a $1.85-billion, 585-megawatt hybrid energy center in Virginia's Wise County, and broke ground on a 1,329-megawatt gas-fired power station in Warren County, Va. Dominion also plans to file regulatory applications later this year for another gas-fired generating facility, a 3-on-1 combined cycle plant with a 1,300 megawatt capacity, in Brunswick County, Va. 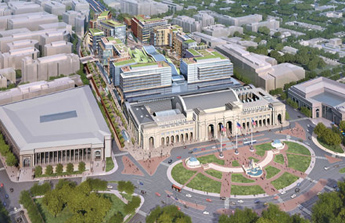 ommercial developers working through the complexities of land assembly and permitting in the District of Columbia are focused on being in the right place at the right time — having buildings that are move-in ready when tenants want them.

This might not be for a while, though. The economic calculus at play in and around the nation's capital is a bit different from other parts of the country, say commercial real estate experts familiar with the region.

"The D.C. metro region is appealing to companies that do business in some way with the federal government," says Richard Samit, president of Fraser Forbes Real Estate Services. "Right now, there's a gridlocked Congress, and the uncertainty that comes in an election year. Because of this, we aren't seeing a lot of location activity." Many companies are taking a wait-and-see approach. "There are a lot of questions to be answered," says Samit. "Will there be a long-term federal budget? Will government spending be cut back even more, which would impact all sorts of federal and defense contractors? Will there be more BRAC-related movement, and if so, what will that look like?"

Despite a decline in federal hiring, the region continues to experience job growth, adding more than 36,000 jobs in the last year, according to George Mason University's Center for Regional Analysis. Still, this hasn't translated into a marked uptick in the demand for space. But Samit predicts that the end of the election season will bring a surge of new location activity. "It's almost secondary who will win the presidential election. The issue is more about clarity. And once the election is over, the budget-related path forward will become clearer and companies will have a better idea of what the future holds."

In the meantime, commercial developers are busy on the sidelines, assembling land and getting their permitting in order so that they will have move-in ready space available when companies start calling.

Even under ordinary circumstances this is no small task. In D.C., the complexities are compounded by the sheer length of the administrative to-do list: agencies that have to sign off, processes that have to be completed and players that have to be involved before shovels go in the ground.

At issue is that much of the land available for redevelopment comes with entangled ownership and control structures, with portions variously owned or controlled by the federal government, the U.S. military, the District government and private owners. Add to this mix environmental and flood-plain related constraints, mandated conformance to D.C.'s green building code, historic preservation of iconic buildings, height restrictions and protections for D.C.'s "monumental core" of statues, museums and national landmarks, and one begins to appreciate the effort involved in getting a building built inside District lines.

It can take years to sort through it all.

David Tuchmann, vice president of development at Akridge, a developer active in the D.C. metro area, knows this first hand. In 2002, his company participated in a federal auction for the right to build buildings in the air above the District's central passenger rail terminal, Union Station. "We won the air rights, but because of the complicated nature of things it took four years just to close the transaction," he says.

In 2006, the company embarked on a master planning process for a mixed-use project at the site, only to be forced by the economic downturn and credit crisis to sit tight.

Now Akridge wants to move forward on the 3-million-sq.-ft. (278,700-sq.-m.) Burnham Place project, which would include extensive office space "ideally suited for a corporate headquarters user," Trachtmann says. "We want to be far enough along in the process so that we would be able to make rapid progress and complete the build-out for a major corporate tenant in a comparatively timely manner. We've already had inquiries from companies interested in the space," he adds.

Just outside District lines to the north, the regional personality begins to change, with a biotech industry clustered along the I-270 corridor in Maryland, stretching toward Baltimore. It's an industry less reliant on federal government budget cycles, and it continues to grow.

"The only bright spot in the D.C.-Baltimore metro area right now is around Gaithersburg and through to Johns Hopkins University in Baltimore," Samit says.

State and local efforts have supported the expansion of the region's biotech industry, with biotech investment tax credit programs that have led to new investment in start-up biotech companies, including 20/20 Gene Systems of Rockville and SynAm Vaccine of Gaithersburg.