Nevada leaders rethink their economic development efforts
as the state adjusts to a changing economy.

Apple's plans to invest $1 billion over the next decade in a new data center in Reno could be the foundation of a major tech cluster in Nevada. That's what the state's economic development officials are hoping after granting state and local incentives of $89 million.

"Historically, Nevada has not offered tax incentives that are competitive for data centers," says Steve Hill, executive director of the Governor's Office of Economic Development. "We did an economic and competitive analysis and stepped up and made it work. Apple was terrific to work with, and they liked working with Nevada. We were able to move quickly. That's one of the benefits people find in Nevada."

Apple knows Nevada's benefits well: Reno is also where the company has parked its Braeburn Capital subsidiary, through which it processes much of the parent firm's profits due to the lack of a state corporate income tax in Nevada.

Hill says Apple's presence in Nevada will likely spur further data center growth and will put the spotlight on the state's infrastructure assets. He expects a cluster will develop in the Reno area. In Las Vegas, Switch Communications has had multiple data center expansions. Switch, which specializes in energy-efficient data centers, has more than 2.2 million sq. ft. (204,380 sq. m.) of space in the Las Vegas area.

"When a company with Apple's stature makes a decision like that, a lot of other companies pay attention," says Hill. "We've had quite a few inquiries. Nevada had some technology assets that few folks outside the state — and maybe many inside the state — aren't aware of. There is a very strong digital infrastructure in Nevada and a fair amount of redundancy. It's a safe environment and the one state in the country rated a zero for natural disasters. The ability to know your data center will stay online 100 percent of the time is important." 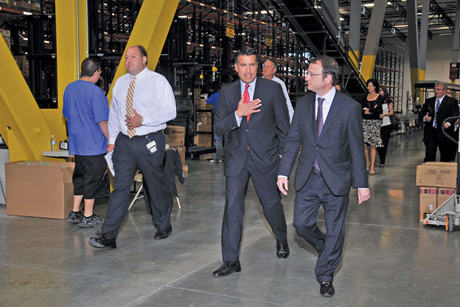 Nevada is navigating a major course change in its economy, Hill says, calling the shift the state's biggest challenge. The restructuring of the state's economic development agency is largely complete, and it's moving forward with a broader effort that includes emphasis on education and work-force development, he says. That includes the creation of the GOEDC last year.

"We have to shift," Hill says. "I moved here 25 years ago from Dayton, Ohio, and started a concrete company. For the first 20 years, it was the best place in the country to be, and it was that way for most everyone who was here. Nevada certainly participated in the housing bubble, and when that bubble burst the economy in Nevada changed significantly. It's really a permanent situation. We are not going to see the growth in the gaming industry as far as bricks and mortar and we won't see the same housing growth."

Hill notes that Nevada is expanding its global reach, something he says the state had not done in the past. He cites a trade mission to the Far East in September to be led by Gov. Brian Sandoval. 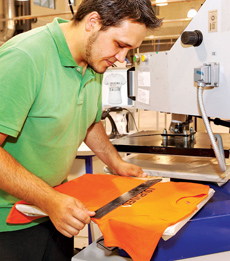 Spreadshirt, a custom printer of T-shirts through online orders, has opened its second U.S. manufacturing site in Henderson.
Photo courtesy of Spreadshirt

"We found the need for more capacity at the end of 2011, having seen 100-percent growth in the U.S. market," says Mark Venezia, Spreadshirt's vice president of sales and global marketing. "We started looking for a new production facility, and we wanted to be west of the Mississippi in order to get packages to our West Coast customers quicker. Nevada, with its tax incentives for opening up a production facility, was the most attractive state among those we looked at."

Venezia says Spreadshirt looked at about 20 sites in the Las Vegas and Reno areas before picking Henderson, primarily due to the availability of more international flights out of Las Vegas. The new facility shipped its first packages in early August. The operation started with 25 employees and will grow to between 75 and 100 by the fourth quarter.

Spreadshirt prints custom designs on T-shirts and other apparel. The company buys blank shirts from a variety of manufacturers, then takes designs over the Internet and prints items individually or in bulk. Venezia says the company prints millions of shirts annually. The company bills itself as promoting creativity by "serving the growing need for personal branding."

Toys"R"Us has opened a 300,000-sq.-ft. (27,870-sq.-m.) e-commerce distribution center in the Tahoe-Reno Industrial Center in McCarran, about 10 miles (16 km.) east of Reno, to support the company's booming online business. The company says the McCarran site was chosen after a search of potential sites in the western U.S. because of its proximity to strong transportation networks.

"As more consumers enjoy the simplicity and ease of online shopping, Toys"R"Us continues to invest in e-commerce enhancements to advance customer service and satisfaction across all shopping channels," said Jerry Storch, chairman and CEO of Toys"R"Us, Inc.

"We believe the McCarran facility will play an important role in further accelerating our company's online business growth and order fulfillment," he said.