Keeping Up With the People Movers 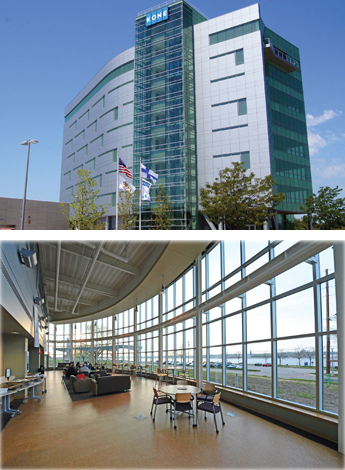 The riverfront in Moline, Ill., is evolving this year with the advent of the $40-million KONE Centre (above top) and a new Quad Cities campus from Western Illinois University (above bottom).
Photos courtesy of KONE and WIU
by ADAM BRUNS
K

ONE, a Finnish maker of escalators and elevators whose slogan is all about "people flow," is flowing people in various directions in the Quad Cities municipality of Moline, Ill., where the company and its partners in August celebrated the grand opening of the nearly $40-million KONE Centre on the Mississippi River waterfront.

"The new facility allows us to combine our U.S. operations departments and the service business/call center teams into one facility," says KONE Marketing Manager Kellie Lindquist. The project retains nearly 250 KONE employees in the area.

A separate KONE project is taking place nearby on 19th St., where KONE started work in August on its Americas Technical Services Center, which it expects to complete in October. Meanwhile, the company continues to manufacture heavy-duty escalators and modernization products at its Coal Valley facility. Several years ago, the company chose to establish an Americas headquarters in the popular HQ destination of Lisle, Ill, a Chicago suburb.

In Moline, as part of the development of KONE Centre, the project's owner, Financial District Properties (FDP), purchased nearby company properties including the former operations center, service business/spares center, Quad Cities branch and the historic post office building known as Willis. Lindquist says the operations building is being marketed by FDP for sale or lease.

"KONE Inc. is a major employer in downtown Moline," said Gregory R. Noe, Renew Moline chairman of the board and corporate secretary and associate general counsel for Deere & Co. "Keeping them a strong corporate citizen here was of major importance to all of us."

The building was designed by HOK Architects' St. Louis, Mo., office and constructed by Ryan Companies, Inc., Davenport, Iowa. More than $470,000 in Community Renewable Energy Program American Recovery and Reinvestment Act (ARRA) Funds allocated by the Illinois Dept. of Commerce & Economic Opportunity were used to install what is now the third largest distributed solar panel in Illinois. Capturing the energy created by the friction of the movement of KONE elevators is another of the energy conservation features of the building, which is aiming for LEED-Gold certification.

The city lent $7.5 million at a reduced interest rate to purchase the existing KONE buildings. The two entities also crafted a development agreement which makes FDP eligible for an up to $10.1-million rebate of the nearly $11 million of property taxes it will pay over the 23-year life of the TIF district.

"KONE is pleased to celebrate this important milestone for our company and the City of Moline. Our commitment to stay and rebuild in downtown has had such a positive impact on our employees of the Quad Cities," said Larry Wash, KONE executive vice president and area director for the Americas. "The opening of the KONE Centre has not only altered the city's skyline, but it has refined the city's image as a modern and vibrant city to live and work in.

Since it launched in 1989, Renew Moline, a public-private partnership, has facilitated more than $250 million of private investment, "making the downtown a place where people live, work, play and learn." Another development is making that final claim come to life, as Western Illinois University, based in Macomb, opened its new Quad Cities Riverfront Campus in January, and is beginning construction of phase two of the campus this fall. 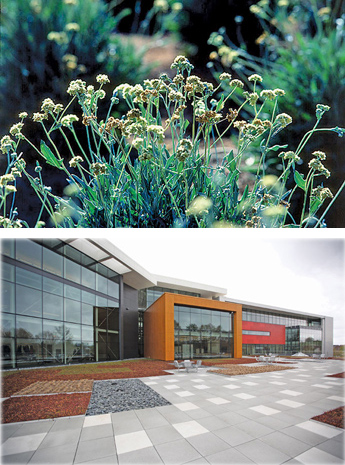 Via a new lab in Arizona, Bridgestone Americas is looking to the humble guayule plant (above top) to possibly supplant the rubber tree as a source for tire rubber. The company’s new $100-million, 450-employee technical center (above bottom), which opened in Akron, Ohio, in April, will support the sustainable sourcing research now taking root in Arizona.
T

he Progressive Policy Institute in July named its top "investment heroes," defined as non-financial companies who are investing the most in the United States, based on FY2011 capital spending. The top five companies on the list were AT&T, Verizon, ExxonMobil, Wal-Mart and Intel.

Last year Intel announced a $5-billion new fab at its site in Chandler, Ariz. Intel continued to display its heroism in August, when it announced it will construct a new $300-million R&D center there as well, creating hundreds of jobs and nearly 1,000 construction jobs. The facility will support Intel's packaging operations in Chandler, an anchor location for the company ever since its initial investment there in 1980.

The news came less than a week after another R&D project landed in Greater Phoenix: Bridgestone Corp. said it would bring 32 high-wage jobs ($75,000 in average salary) and a multi-million-dollar capital investment to a new R&D facility in Mesa that will accompany agricultural research operations at a 281-acre (114-hectare) agricultural site in Eloy, Ariz. The company is no slouch when it comes to investment in the U.S., having committed last year to a new $1.2-billion plant in South Carolina.

Research in Mesa will focus on the use and production of guayule, a shrub native to the Southwest that produces natural rubber in its roots and bark.

Bridgestone participated in research on guayule with the USDA from 1988 to 1991. The company says the successful commercial development of guayule will diversify the source of natural rubber for the tire and rubber industry and reduce today's heavy reliance on Hevea Brasiliensis, otherwise known as the rubber tree, which has a limited growing area restricted to tropical climates close to the equator.

The guayule research is being carried out by Bridgestone Americas Tire Operations, which will leverage the resources of the Bridgestone Americas Center for Research and Technology and its Akron Technical Center, a $100-million facility which celebrated its grand opening in Ohio in April, and which is home to 450 personnel.