Winston-Salem blends its tobacco past with a biotech future. 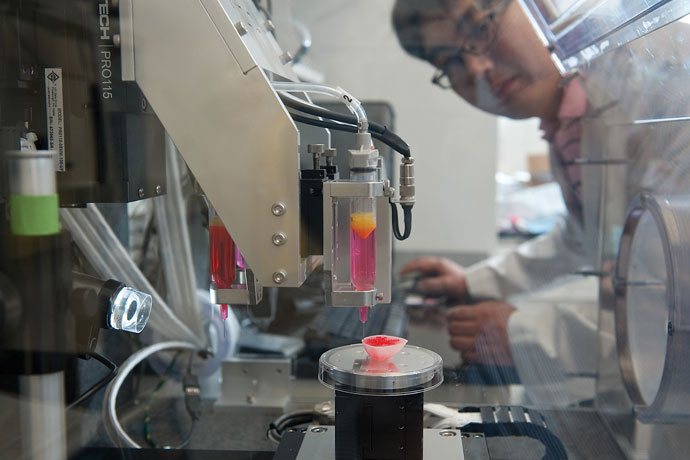 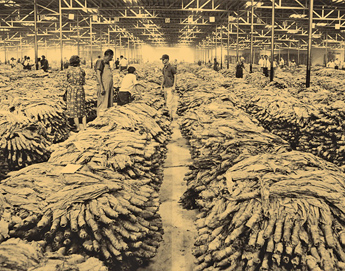 f the walls of the gleaming new Wake Forest Biotech Place could talk, what would they say?

Would they speak of the buildings' proud-but-complex history, an integral part of the tobacco industry that once was a foundation of American commerce?

Or would they speak of cutting-edge medical research that could lead to breakthrough treatments for the world's most intractable diseases?

If they had a voice, they could speak to both. The striking glass and brick complex is part of a quiet transformation taking place in the foothills of the state's Piedmont region, about 100 miles (160 km.) due west of the state's flagship research hub in Raleigh-Durham.

Financed through a combination of federal, state and local funding sources — including the federal New Market and Historic Tax Credits program, North Carolina Mill Rehabilitation Tax Credits and local tax increment financing — Biotech Place is the latest addition to the growing Piedmont Triad Research Park (PTRP), rising on a swath of long-underutilized industrial property at the intersection of US Route 52 and Interstate 40, along the southern edge of downtown.

"Biotech Place is a breathtaking new facility," says Eric Tomlinson, a globally experienced biotech executive who was simultaneously named PTRP president and chief innovation officer of Wake Forest Baptist Medical Center in June. "Our past was tobacco and textiles. Our future is technology, and it's all converging here at the research park."

To create the new facility, two adjacent Reynolds buildings were gutted and stripped to their skins, and retrofitted with new systems. A new glass atrium connects the two formerly separate structures. The design incorporates a cache of surplus glass bricks used in the construction of the original buildings in the 1930s that was found during the gutting process. 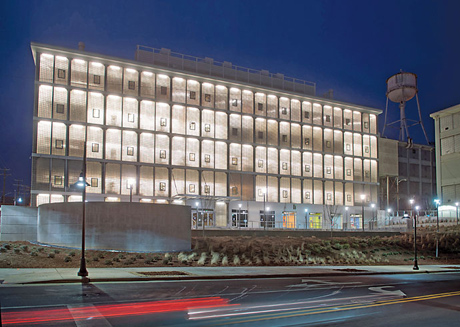 Biotech Place is just one part of the growing Piedmont Triad Research Park.

R.J. Reynolds has been headquartered in Winston-Salem since the company's founding in 1874. But by the 21st century, it had moved most of its core manufacturing operations elsewhere. In 2004, Reynolds decided to donate 38 acres (15 hectares) of excess downtown real estate and $2 million in cash to help develop the research park. The $19-million contribution, which included 40 buildings, was a pure gift to the city of Winston-Salem, according to Reynolds spokesperson David Howard.

"We received a tax write-off for the donation, but beyond that there were no other incentives associated with this," says Howard. He says that as a corporate citizen of the community, the company is committed to its revitalization. "We all live here too, and the changes taking place are really making a difference in the city," he says. "Our donation is clearly playing a pivotal role in the redevelopment of downtown Winston-Salem."

In 2010 Reynolds transferred to the city the final piece of property: a decommissioned coal-fired power plant that Tomlinson hopes to re-imagine as an art museum.

"We want to pattern it after London's Tate Modern," a modern art museum inside an old power plant on the banks of the Thames River, Tomlinson says.

At build-out, PTRP will be the largest urban park of its kind in the U.S., Tomlinson, says. The fact that Raleigh-Durham's Research Triangle lies just down the road doesn't faze him. Nor do the expansion plans of other major medical centers in the Mid-Atlantic region, such as Baltimore's Johns Hopkins University.

Wexford has reconfigured some of the former Reynolds buildings as loft residences, where Tomlinson himself recently moved.

"I have a three-minute commute by foot to work," he says. "It's a great quality of life, and we think this will appeal to many research and technology companies looking to provide this lifestyle as an added benefit to attract top talent, while leveraging Wake Forest's research capabilities and state-of-the-art facilities."

One home-grown technology company that had considered a major move decided instead to stay in Winston-Salem because of the park's appeal and the opportunity to be a part of the city's economic revival.

Faced with the prospect of outgrowing its existing space, e-commerce company Inmar knew it needed to make a move. After an extensive site search in the region and in other states, the company decided to stay, opting to renovate two donated Reynolds buildings on the PTRP campus to house its expanding work force. Wexford will manage the makeover process, making use of the same financing arrangements used with Biotech Place to enable the adaptive re-use of the visually striking and historically significant buildings.

"Because we have large facilities in Atlanta and Fort Worth, both those locations were considered," says Rick Schmidt, Inmar's director of finance. "Many downtown locations were considered through the process, as well as sites throughout the city and in Kernersville," located just to the east. The company received 12 formal proposals to build out various sites. "We also had countless unsolicited inquiries."

Schmidt attributes the company's decision to the positive changes taking place in the city and the opportunity to be a part of the transformation. "The revitalization of downtown Winston-Salem, and in particular this site, is in alignment with Inmar's strong belief in sustainability," he says. "It was a cultural decision as well. Locating here means being part of a growing technology community. It offers unique and attractive amenities. It also gives us access to the additional talent that we want to attract."

Inmar is investing $60 million in the project and creating more than 200 high-paying jobs. In exchange, the company is receiving a $7-million incentives package that includes state and local grant funding and support for workplace training. "The incentives come with claw-back provisions and performance criteria," Schmidt notes.

As for Reynolds, the activity taking place at the research park is sparking a wave of interest in other excess real estate.

According to Howard, upscale hospitality company Quaintance-Weaver is considering the purchase of Reynolds' historic former headquarters building for a new hotel. Designed by William F. Lamb, the architect who also designed the Empire State Building, the building was built in 1927. It's sat empty for the last few years, after the company built its new headquarters next door.

"We are optimistic about the prospects for this," says Howard, "which would represent a real cornerstone for the whole Winston-Salem revitalization effort."


On Yet Another Former Reynolds Property, Furniture Rebound to Advance

espite the conventional wisdom that suggests that furniture manufacturing — once a staple of southwestern Virginia and western North Carolina economies — is gone for good, there's evidence to indicate otherwise. According to a report by the Boston Consulting Group, furniture manufacturing is among seven broad industry clusters that are returning to American shores, a trend that will accelerate in the next five years.

The analysis notes that these industries will soon reach a point at which China's shrinking cost advantage should prompt companies to rethink where they produce certain goods meant for sale in North America. "In many cases, companies will shift production back from China or choose to locate new investments in the U.S.," the authors note in "Made in America Again: Why Manufacturing Will Return to the U.S."

Doug Faris, a senior vice president at Binswanger, sees this analysis playing out on the ground, in part due to the high cost of shipping heavy goods across oceans. "Logistics costs as a component of a manufacturing location decision are gaining increased importance," he says. "It is easier and less expensive to set up here than it is to ship it from Asia, especially if the production center is on the East Coast and the goods are destined for urban centers in the eastern half of the U.S."

"There is nothing fast about any site selection process," he says. "If you can shorten it by giving an existing building a comparatively minor makeover, this means you can open your doors much faster and the return on your investment will come in less time."

It's one reason that Ashley Furniture decided on Advance, N.C., as a base for its expansion, notes Faris, who helped Ashley negotiate the terms of the deal. The Wisconsin-based company purchased a 1.4-million-sq.-ft. (130,060-sq.-m.) vacant industrial facility and adjacent land in the heart of western North Carolina's furniture production region to house expanded manufacturing and distribution operations.

"The fact that this is a 650-acre [263-hectare] facility with over 300 acres [121 hectares] already developed was a major decision-making factor for us," says Ashley Chairman Ron Warnek. After a year-long site search, the company had narrowed down its options to the North Carolina site and locations in Virginia and South Carolina. "There were existing facilities available in these states," he says, "but none that were up to our standards."

Formerly owned by R.J. Reynolds, theAdvance site was in great condition, he says. "R.J. Reynolds spent a lot of money on this site, and the development was very well done. We are planning to add 1.3 million square feet [120,770 sq. m.] to the existing facility, and the site is conducive to this growth."

Warnek adds that company executives also were also attracted by the region's furniture-making tradition and skill sets. "We've been going to the High Point Furniture Mart here for 40 years, and we really like the area," he says.

Ashley is investing $80 million in land, buildings and equipment, and expects to create more than 1,000 jobs once the distribution and manufacturing facilities are in full production mode. The company received tax incentives valued at $3.2 million, plus an $825,000 grant from the state's One North Carolina Fund, according to the Davie County Economic Development Office.