The Military and Defense Industry: An Economic Force in the U.S. 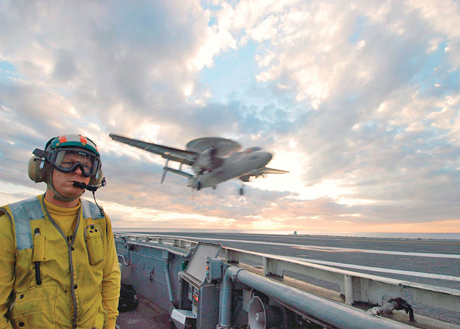 he military and defense industry is a significant driver of economic development in communities throughout the country. The positive benefits from military installations impact every citizen.

Often overlooked, the companies that support the military are major employers and tax generators. A report prepared by Deloitte and sponsored by the Aerospace Industries Association (AIA) earlier this year assessed the contribution and financial impact of the U.S. aerospace and defense industry. The indirect and induced employment associated with the U.S. aerospace and defense industry is a minimum of 3.5 million jobs.

The companies providing these jobs generated $324 billion in sales revenue in 2010, with $15.6 billion in net income after tax at an average pre-tax reported operating profit margin of 10.5 percent.

These companies paid $5.5 billion in corporate income taxes on their earnings, as well as $1.7 billion in state income and similar business taxes. With individual direct employee taxes, the total industry generated an estimated $37.8 billion in wage and income-based taxes to state and federal government treasuries, not including the taxes paid by indirect and induced industry employment.

The report does not include the users of these products and services. However, the Department of Defense (DoD) reports that it employs 720,000 civilian employees and 2.2 million military personnel. It has approximately 431,000 facilities or assets in the U.S. Employee roles include aerospace and defense skilled workers at armed forces maintenance and repair depots, National Aeronautics and Space Administration (NASA), Federal Aviation Administration (FAA), other defense agencies including Defense Advanced Research Projects Agency (DARPA) and civilians working at DoD.

Local governments and states work to support the military at active installations. Defense communities may also have closed or realigned installations, and new uses are often identified for those facilities or assets.

Defense communities are attractive to companies looking to expand or relocate. It results in driving further activity, increasing employment and investment in a region. Economic development officials often look at strategies at a military installation to create other opportunities. JAXUSA Partnership, a division of the JAX Chamber, in Jacksonville, Fla., has found success in promoting its aerospace and aviation industry as a result of the strong military and defense presence throughout the years.

Northeast Florida is fortunate to enjoy a diverse economy with strengths in multiple industries. However, the military and defense industry certainly plays a significant role in its economy and serves as the largest employer in the region.

Northrop Grumman, BAE, Boeing and Kaman Aerospace are just some of the major defense contractors with a strong presence in the region. Many of these companies have facilities and operations at the largest industrial park in the Southeast, Cecil Airport and Cecil Commerce Center. The airport is the former site of Naval Air Station Cecil Field. Airport and community leaders promote this 1,500-acre mega-site, which has one of the longest runways in the country.

Jacksonville is home to multiple other military facilities, including Naval Station Mayport and Marine Corps Blount Island Command. Mayport is one of only two East Coast Navy homeport areas, and there are more than 50 companies in the area that support Navy ship repair — BAE Systems is one of those companies.

Naval Submarine Base Kings Bay is located just outside the JAX Region in southeast Georgia. The Florida National Guard Headquarters is located in St. Augustine, Fla. and utilizes Camp Blanding as an active training base.

Of the personnel who exit the military each year, more than 3,000 choose to remain in the region, providing a steady stream of skilled workers for area business.

All this activity improves the ability to attract business in not only the region but the entire state.

What Is Often Not Captured

Having a significant military presence changes the dynamics of a community. The military brings a large population of children. It makes the schools more diverse. These quality citizens and families are more involved. Parents want their kids to do well in school. Volunteer associations thrive because they have a larger support system.

A retired admiral with the United States Navy, community leader in Jacksonville and a vice president at Florida State College at Jacksonville, James Stevenson Jr. says that the quality of individuals is often not captured. "Military are active in the community as private citizens. They have the training and are a huge asset to employers," says Stevenson.

For many defense communities, there are a significant number of servicemen and women exiting the military every month. These individuals are highly skilled, community-oriented citizens that provide a continuous work force for private companies. In Jacksonville, there are 950 exiting military personnel each month choosing Jacksonville as their home. For regions that have a lower cost of living and high quality of life, it is common for them to stay where they were based, and it is a significant asset for economic development efforts.

Aaron Bowman is Senior Vice President for Business Development, JAXUSA Partnership. Previously working for BAE Systems and serving in the U.S. Navy, Aaron has an extensive career in the military and defense industry.