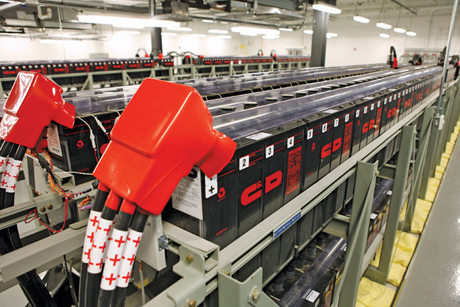 The U.S. Green Building Council has certiﬁed the data center at GE Appliances & Lighting in Louisville as the ﬁrst data center in Kentucky to achieve Platinum-level certiﬁcation. The data center houses 128 cabinets holding high-density servers, and supports 27,000 employees in more than 100 countries.
Photo courtesy of GE
I

n 2010, Google announced it was looking for a location for an experimental fiber network. Its plan: To build and test ultra high-speed broadband networks in a few locations across the United States that would deliver the Internet at 1 gigabit per second.

Google received more than 1,100 replies from governments and individuals to its formal request for information, with many communities using gimmicks to get the company's attention. Topeka, Kan., renamed itself "Google, KS" and there were, of course, many Facebook pages urging Google to come to a specific community. Google ultimately decided to introduce the service to parts of metropolitan areas in Kansas and Missouri.

Why was there such a tremendous response? Google's experimental fiber network is projected to have download speed 100 times faster than broadband connections offered by telephone and cable companies. And communities know that it will have a positive impact on their local economies.

While Google's initiative is targeted more at homeowners, it exemplifies the urgent need for better and faster Web connections, particularly in communities that are looking to attract or retain large corporate users — users that cannot function without impeccable connectivity to get their work done. This type of fiber connection is critical to businesses that need to reliably transmit large volumes of data.

For local governments and municipalities, a robust fiber connection can mean the difference between securing a corporate headquarters or losing it to the town or state next door. Good fiber connectivity encourages companies to stay, helps them to grow, and attracts new businesses, which in turn creates new jobs in the community.

The advent of advanced fiber connectivity in communities across the country, from San Francisco to rural North Carolina, offers corporate users new factors to consider as they decide where to locate their businesses and data centers. There are a number of related factors that also are important to executives choosing their next site. They include:

Close to one-half of the United States' population can be reached in about 12 hours by truck from the nation's capital. This is because of the effective Interstate Highway system developed over 60 years, up and down the East Coast and throughout our country. The same holds true for today's fiber-optic network and connectivity: The better the fiber infrastructure, the more effective it will be for businesses. But it's worth remembering that it took over 60 years to build out the Eisenhower Interstate Highway system, and building fiber connectivity will also take some time. Government's development of the Internet started in the 1960s and became commercialized in the early 1990s.

High-speed Internet plays a key role as regions compete to boost economic development and entice corporations to relocate to their communities. Many states have stepped up efforts in the past year and set ambitious goals to wire more areas, partnering with providers to widen broadband availability. Close to 300 projects across the United States received Federal Recovery Act grants for broadband infrastructure upgrades.

With the downturn in the economy, many companies are considering the incentives that are being offered by cities and states when choosing a new location. In fact, state and local incentives now are the second most important factor considered by site selectors.

The top factor was labor costs, with companies ranking the cost of hiring talent as a key factor driving relocation decisions. This, too, is impacted by fiber connectivity. The evolution of technology means that many businesses can operate efficiently from any location, allowing
them access to a more affordable workforce.

Companies are increasingly looking for smart, young, tech-savvy workers. A robust fiber network attracts those workers to a community. For example, companies are staying or relocating to Northern Virginia because it has one of the best work forces in the world — thanks, in part, to its robust fiber networks and cost-effective electric power.

The price of electricity can be an important factor for some companies. To a large data center, a cost of 1 cent per kilowatt hour over 10 years can make a $1,000,000 difference in total energy costs. As a result, a corporate data center in a location where power is less expensive can make a major impact on the firm's operating budget.

Power consumption is one of the biggest factors in sustainability. For example, data centers use tremendous amounts of energy, so those using electricity from green sources can have a major impact on enterprise-wide initiatives to reduce carbon footprint.

As in all things real estate, location is certainly an important factor. Many financial services firms, for example, want to be close to a hub such as New York/Northern New Jersey, similar to lobbying firms needing to have close proximity to Capitol Hill. If location doesn't matter, suburban or rural locations offer options (land or buildings) with better pricing.

Rent is generally the second largest expense for a company after salaries, so the cost of space is certainly an important factor to consider.

Other cities will follow soon, and Google is expected to expand its new high-speed service to other areas around the country. It's clear the nation's information superhighway will be built faster than our Interstate Highway system. It's America's new need for speed and productivity. 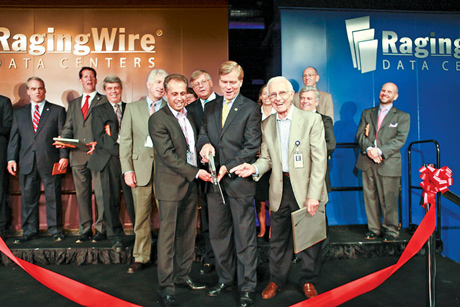 he world's economy — and the nation's — depends on information, available on an unlimited basis all the time. And no component of the information-based economy is more important than the data center — the computing, storage and telecommunications hubs that keep the information available on demand, around the clock. These operations have exacting requirements: high degrees of energy reliability, superior levels of customer service, plus competitive electricity prices likely to remain stable in the future. For data center operators, Virginia — and particularly Dominion Virginia Power's service area, covering much of the Commonwealth — offer a climate where these expectations can be met and exceeded.

For more than a century, Dominion has delivered reliable electric power to our customers, supporting proper operation of electronic equipment and industrial processes. Companies that depend on reliable, low-cost electric power have consistently selected Virginia and created one of the most significant concentrations of data centers in the nation. Companies like Microsoft, Amazon, Digital Realty Trust, Equinix, DuPont Fabros, RagingWire, Sabey and many others have selected Virginia for their East Coast and global operations.

Dominion's newly created Data Center Services group focuses on getting data centers up and running quickly and reliably. The Dominion Data Center Services team understands that our customers need a utility that can execute a project in a timely manner. The company's streamlined connection process makes partnering with Dominion an easy choice. With half of the United States internet traffic running through Dominion's service territory, our expertise is proven. Data center customers are attracted to our service area for a suite of reasons: reasonable rates, a balanced fuel mix, reliable service, a highly educated workforce, and numerous fiber networks and fiber providers. Dominion's competitive rates — more than 30% below the national average and among the lowest on the East Coast, are instrumental in the site selection decision. Dominion's balanced portfolio of generating units — including nuclear, natural gas, coal, hydroelectric and biomass, with wind under development — helps mitigate price volatility and will work to keep prices competitive over time.

Dominion is reducing its environmental footprint and has already spent more than $3 billion to improve the environmental performance of our generating facilities. These investments ensure compliance with new environmental regulations and help minimize their impact on future electric rates. Dominion's generating fleet is also widely recognized for its low carbon intensity — and in fact ranks among the lowest one-third of all utilities in terms of this important environmental measurement. (Carbon intensity refers to the average amount of carbon emissions released for each megawatt-hour of electricity produced.)

For Dominion, reliability is paramount — whether we are serving a large data center, a distribution facility or a commercial end-user. A recent industry study indicated that Dominion is a leader in electric transmission reliability with one of the lowest annual sustained outage rates. The company's power quality and reliability team is available to assist customers with specific needs, including analysis of requirements, during the site selection process.

Virginia is second to none in providing a business environment that allows companies to set up operations quickly and efficiently. Virginia is consistently ranked as one of the most pro-business states by numerous rating organizations such as CNBC, Forbes, and Pollina Corporate Real Estate. A business-friendly regulatory structure, low operating costs, and access to the highest concentration of technology workers in the United States make Virginia the obvious choice for companies considering relocation or expansion of facilities. Virginia's tax exemptions and other incentives for data centers and other capital-intensive businesses allow companies to reduce their bottom line and compete in the global landscape.

Bottom Line: A Good Place to do Business

For data centers and other companies that are part of the technology-driven economy, Virginia is unsurpassed as a good place to do business. And Dominion's service area — including about two-thirds of the commonwealth — offers many benefits: superior customer service and reliability, competitive rates, a commitment to sustainable solutions and environmental protection, and access to extensive fiber networks and a skilled workforce. 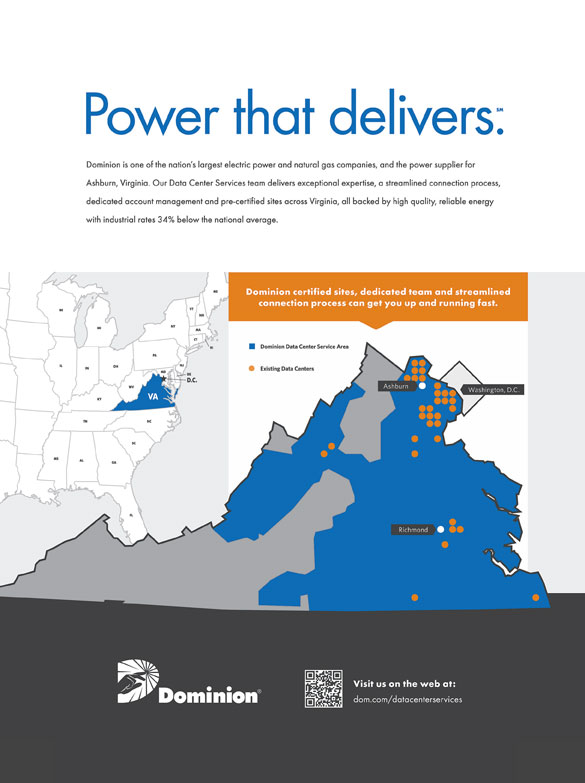 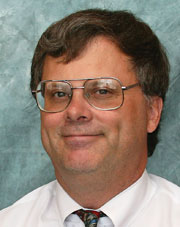 ortune 500 companies such as John Deere World Headquarters and the US Army alike rely on the fast, reliable fiber optic network in the Quad Cities. Our high-speed ringed fiber optic cables stretch from the Quad Cities to Chicago, IL to Denver, CO, with additional dark fiber connectivity for future capacity needs, making the Quad Cities an ideal location for back-up or redundant services.

"When our company decided to expand its product offering, we needed a new location to grow. Because our current fiber optic assets extended across four states, our expansion could have been located anywhere from Denver to as far east as Chicago," said Scott Rubins, president and CEO, Geneseo Communications. "As with any real estate based expansion, location was the key to success. The company previewed many locations, including Chicago and Denver, and decided on the Quad Cities region for three main reasons. First, the overall cost to do business was 30%-40% less. This would provide a significant savings to our customers, which will ultimately improve our profitability. Second, the willingness for the area's local elected officials to work with me on a few key areas that needed improvement. Third, the quality of workmanship and value local contractors provide and the ease in working with them to get our project done."

Companies in the Quad Cities hold a competitive edge, having ready access to other major markets, but without the high cost of being located in a big city. MidAmerican Energy Company, for example, provides redundant dual feed uninterrupted service at 40% less than the national average.

What's more, we have the workforce to fulfill employer needs. A network of more than 40 colleges and universities within a 90-mile radius of the Quad Cities pump 33,000 college graduates into the labor force each year.

These strengths, coupled with high quality of life factors including short commute times, affordable housing, a nationally recognized riverfront and quality healthcare and education, make the Quad Cities a preferred place to run a business, work and live. 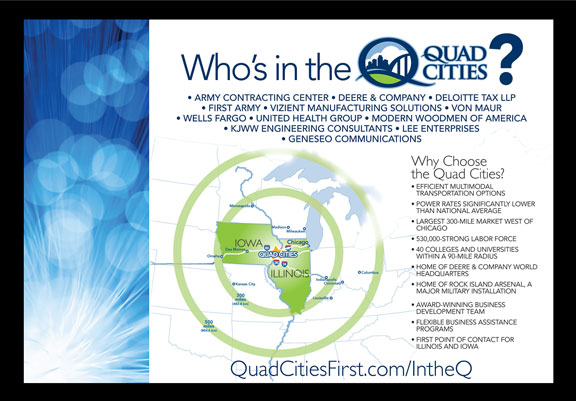