And no, this isn’t a football season preview. 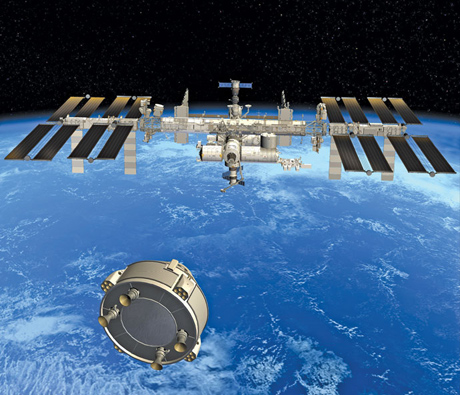 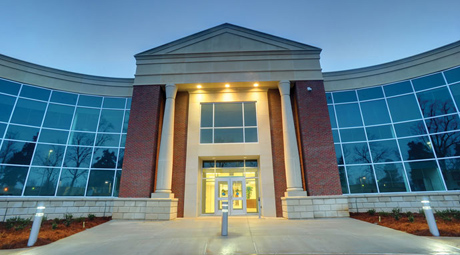 oday's pathways to financial success lie in innovative, intellect-driven fields. In the South, our heroes are frequently found on the college gridiron. But can entrepreneurs and technological innovators be heroes too? Can our brightest techies make it here at home, or must they travel to California or Massachusetts to seek their fortunes?

Almost 10 years ago, I and other members of the Southern Technology Council encouraged branding the South* as a national and international location famed for its vibrant technology environment.

Last week at a meeting, I heard the identical idea proposed. Everyone nodded — yes, we need to do this. The idea has endured, yet its lack of progress illustrates the difficulties of a high-tech image — both real and imagined — in the South.

What is true about the environment for technology in the South? Let's start by debunking some myths about the South.

Myth #1:  The Southern economy is based on low-value production.

The private sector is voting on the South's technology environment by investing in high-tech and advanced manufacturing facilities in the South. Much of the investment in new facilities and expansions in the South is in high-technology, knowledge-intensive and advanced manufacturing industries. Corporate project information from Site Selection's proprietary New Plant Database shows about a third of the investment is flowing into these industries. It also shows that foreign companies are among the leading investors in these high-tech enterprises.

According to Conway Data's New Plant Database, the percent of total corporate facility projects in the Southeast over the past decade that included a headquarters component was 6.5. What was it nationally? Approximately 8 percent.

Meanwhile, a look at overall New Plant figures (comprising all types of corporate facilities, from call centers to manufacturing to R&D) shows that the seven states of the Southeast (or 14 percent of the nation) carry much more than their weight, representing 22 percent of all projects tallied in the United States since January 2002.

Myth #5: Education in the South is uniformly bad.

Let's pick an educational statistic: percent of students proficient in math in 8th grade. Sure, the South had a lower percentage rate in 2009, 33 percent versus a national rate of 26 percent. But look at the improvement. The national improvement from 2000-2009 was 32 percent, vs. 47 percent for the South. Many of the states achieved incredible improvement: 76 percent in South Carolina, 66 percent in Mississippi, 56 percent in Tennessee.

The region is home to, among other areas, Research Triangle Park, Atlanta, Oak Ridge, Nashville, and Huntsville. The 2011 Cyberstates report released last October by the TechAmerica Foundation ranked Florida fifth in high-tech employment for 2010, and South Carolina fifth in net tech job creation in 2010 with 300, among only eight states that added net high-tech jobs. Here are the rankings for the only Southeastern states for which TechAmerica issued state-level reports:

An earlier report on tech employment at the city level, published in 2010, found that Huntsville, Ala., was second only to Silicon Valley in concentration of tech workers, with 23 percent of its private-sector work force in the tech industry. Boulder, Colo.; Durham, N.C.; and Palm Bay-Melbourne, Fla., rounded out the top five cybercities with 22, 17, and 15 percent of their private-sector work force in the tech industry in 2009, respectively.

The South may not be Silicon Valley, but many Southerners themselves would be surprised by the vitality and potential for high-tech enterprises in the region. With continued high rates of improvement and investment, the South will increasingly be known as a destination for all facets of high-tech operations.

After building technology companies for almost 20 years in Silicon Valley, Dr. Dirk Brown, who was recruited from California last year to be the director of the Faber Entrepreneurial Center at the University of South Carolina's Moore School of Business, moved his newest startup, interactive media firm Pandoodle, to Columbia too.

His firm was helped by a check from SC Launch, an affiliate of state-funded research corporation SCRA. Since its inception by SCRA in 2006, SC Launch has supported and funded 188 companies in SC, helped draw 11 relocations to the state, provided business services to 230 early-stage companies and helped position emerging South Carolina companies to secure more than $130 million in follow-on funding from angel, venture and other private capital sources.

Brown's reaction to moving to the South?

"It's a hidden gem," he says. "I can get very talented engineers, marketing support, and a world class business environment and still have a great quality of life for my family. The Southeast is quietly reaching the critical mass required to support the next generation of high-growth, technology companies."

Scott Doron serves as Director of the Southern Technology Council for the Southern Growth Policies Board. Previously he served as associate manager for strategic research in the South Carolina Department of Commerce.


*For the purposes of this article, the South is here defined as Alabama, Florida, Georgia, Mississippi, North Carolina, South Carolina and Tennessee.

ne negative myth about the South turns out to not be so mythical. The South has a ways to go in one critical area of high-tech health — venture capital and the start-ups and entrepreneurs who thrive on it.

A 2007 report from Broadgate Consultants analyzing venture capital in the seven-state Southeast found that, as with educational improvement and R&D activity, the growth rate of VC investment in the Southeast had grown fast, and had "significantly outpaced other regions."

But growth is one thing, and total cash is another. The lack of venture capital is a chronic problem. In 2010, the South had only 4.8 percent of the nation's venture capital. The MoneyTree Report by PricewaterhouseCoopers and the National Venture Capital Association (NVCA), based on data from Thomson Reuters, found that VC investments in the second quarter of 2012 totaled 44 deals worth $200 million in the Southeast, or 2.84 percent of the total of 758 deals (worth $5.8 billion). The region trailed eight other regions in dollar value, but actually led San Diego, the Northwest and D.C. in number of deals. Over half the deals in the Southeast were in medical devices (six deals), software (12) and media/entertainment (5), which together comprised 70 percent of total deal value.

Of the top 10 deals in the region in the second quarter, five were scattered across Florida, three in Georgia (metro Atlanta) and two in Tennessee.

Statistics shared by the National Venture Capital Association show Georgia to be the most consistent since the first quarter of 2011, with quarterly deal totals ranging from 11 to 18. Florida is neck and neck with Georgia, with North Carolina and Tennessee hovering just behind and the rest of the states barely making a mark.

However, as a region, the trend is relatively positive in terms of annual deal totals during the recession: 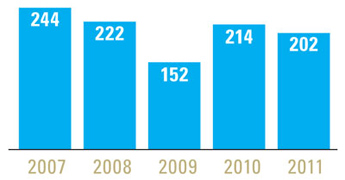 Moreover, there may be a promising subsector of VC: A first quarter update report issued by the Angel Resource Institute, Silicon Valley Bank and CB Insights to raise awareness of early stage investment activities by angel investment groups found that the Southeast (defined as a 12-state region) accounted for 13.5 percent of angel investment activity, trailing the five-state Great Lakes region (13.8 percent) and California (18.8 percent). In terms of total funding, companies in the Southeast received 18.4 percent of total angel investment in the quarter, trailing only California (25.7 percent).

Some brighter lights are shining from the Southeast on the entrepreneurial front as well: According to the 2012 edition of the annual Kauffman Index of Entrepreneurial Activity, published by the Ewing Marion Kauffman Foundation, the states experiencing the largest increases in entrepreneurial activity rates over the past decade were Nevada (0.23 percent), Georgia (0.18), Massachusetts (0.16), Tennessee (0.15), California (0.13), Louisiana (0.12) and Florida (0.12).

In Tennessee, more than $1.4 billion in venture capital was invested in 215 Nashville-based companies during the past decade, according to a new report by Nashville Capital Network and Nashville Health Care Council. Nearly $1 billion of it was invested in health-care businesses, many of which revolve around technology.

To further improve that momentum, the Volunteer State has created LaunchTN, a new public-private partnership focused on supporting entrepreneurs.