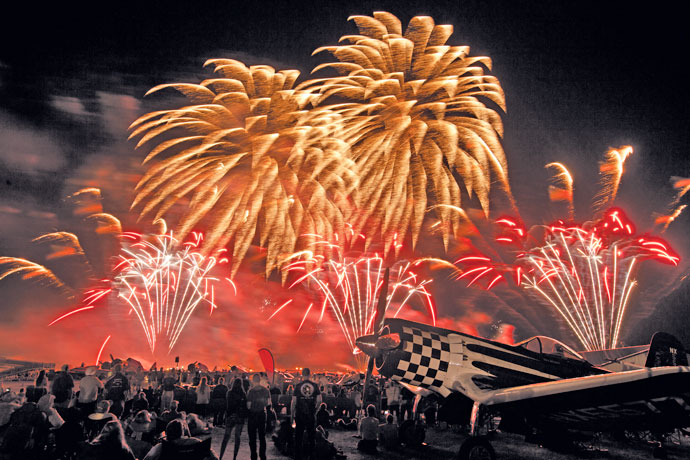 AirVenture draws a half million people to Oshkosh each summer for a week-long celebration of aviation.
Photo courtesy of the EAA
by JOHN W. McCURRY
M 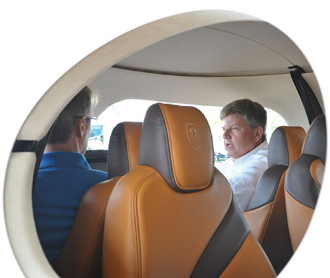 Kestrel CEO Alan Klapmeier, right, sits in the cockpit of a mock-up of the K-350 plane.
Photo courtesy of Kestrel

ore than a half million aviation enthusiasts convened at Wittman Regional Airport in Oshkosh, Wis., in late July for "The World's Greatest Aviation Celebration." AirVenture, sponsored by the Experimental Aircraft Association, is part air show and part trade show and has been Wisconsin's biggest aviation claim to fame for 60 years.

Wisconsin has a history in the aviation supply chain. But it now appears poised to grow into a significant center of aviation manufacturing as two companies with ambitious plans, but only mockup aircraft thus far, hope to develop major assembly facilities. Kestrel Aircraft, a company which once favored Brunswick, Maine, as its manufacturing base, is now landing in Superior, while Morgan Aircraft, which plans to develop a vertical takeoff and landing plane, will build a facility in Sheboygan. Both companies hope to benefit from lucrative state incentive packages.

Kestrel CEO Alan Klapmeier and his brother founded Cirrus Aircraft in Duluth, Minn., just across the St. Louis Bay from Superior. Klapmeier left Cirrus four years ago to take over Kestrel with plans to manufacture a small single-engine turboprop aircraft made of carbon-fiber composites. Kestrel will continue to do some composites work in Brunswick, slowly growing from the staff of 25 currently working in a hangar at the former Naval Air Station Brunswick. But Kestrel is establishing its headquarters and manufacturing operations in Superior after things didn't work out as planned in Maine.

"I suppose the polite way to put it is that economic development financings are complicated, and you have to have a lot of different pieces to get it done," Klapmeier says. "We weren't able to get everybody on board in Maine as we had expected."

Klapmeier says many people assume that Superior, with its proximity to his previous company in Duluth, was an immediate second choice. However, that was not the case. Klapmeier looked at locations around the country, including a final list of 17 communities that received close examination. Superior moved to the front of the list with an aggressive package of state and local incentives and a welcoming attitude by local officials, Klapmeier says. The incentive package includes more than $110 million in tax credits and loans.

Kestrel announced in January that it would locate its manufacturing operations in Superior with hopes of employing 600 by 2016. The company plans to build an innovative six-person plane known as the K-350 which the company says will have a range of 1,500 miles (2,414 km.) at a speed of 375 mph (603 kph).

While the process has been slow, Kestrel is making progress in Superior. The company has moved into part of the city's old post office and federal building. About 50 people are working there as the company moves forward with its plans in hopes of breaking ground on its composites facility this fall.

The primary delays have involved arranging for private financing, a process Klapmeier describes as frustrating. Kestrel will also have to gain FAA approval of its plans as it moves forward. Klapmeier believes the company will have a prototype developed by the end of 2013 and full-scale manufacturing under way in about three years.

"It depends on financing, the ability to hire on the right schedule and the FAA," he says. "We still feel good about the airplane and its place in the market."

Permission To Land in Sheboygan

Morgan Aircraft introduced its VTOL concept at the Oshkosh air show in 2005. The company has subsequently developed several unmanned, radio-controlled prototypes. As the company grew and was awarded patents, it attracted the attention of local and state officials. Brian Morgan, the company's CEO and co-founder, says discussions were held with the administration of former Wisconsin Gov. Jim Doyle over the course of a few years, but details were never nailed down.

Meanwhile, the company's plans progressed and it began working with noted aviation expert Ken Rosen to move forward with its technology. The company also began to attract the attention of other states. Morgan says Texas, New Mexico, Florida and both Carolinas were among the states dangling lucrative incentive packages.

"Gov. Walker and Paul Jadin [director of the Wisconsin Economic Development Corp.] met with us face to face and learned about the project," Morgan says. "That was the big difference. These are politicians that did what they said they were going to do. I mean that with some humor, but total respect."

Morgan praises the Midwestern work ethic, especially as found in the Sheboygan region. "There is an interesting mix of talent here that is applicable to the aircraft industry," Morgan says. "The Sheboygan County Airport is a wonderfully sized airport. It has a long runway and it's a well-serviced general aviation airport."

If all goes according the plan, Morgan Aircraft will develop its manufacturing operations in three phases, culminating in the employment of 1,000 by 2017 or 2018, Morgan says. Plans call for a 600,000-sq.-ft. (55,740-sq.-ft.) plant at the airport and an investment of $200 million. However, as with Kestrel, the challenge is attracting private investment. "When you use the catchphrase 'vertical takeoff and landing,' it's viewed as a challenge," Morgan says. "Funding has been a challenge and it's not in place yet. That's what we are in the midst of right now. The manufacturing facility is still years off."

Wisconsin is offering an incentive package that includes payroll tax credits that could reach $12- to $13 million depending on the number of jobs created; a training package worth more than $10 million; a 10-percent rebate for capital expenditures in the company's manufacturing building; and up to $6 million to match private equity raised during the company's first round of funding. The first million is a forgivable loan based on the company hitting an employment level of 240 by the end of 2015. The remainder is a low-interest loan. 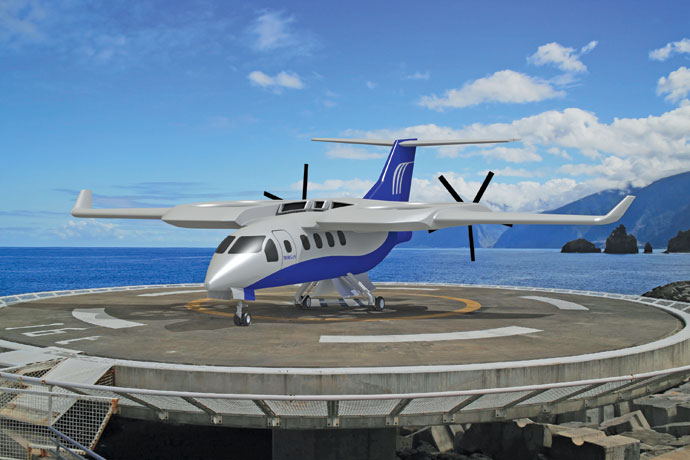