For customer contact centers, cloud computing is becoming the wave of the present. 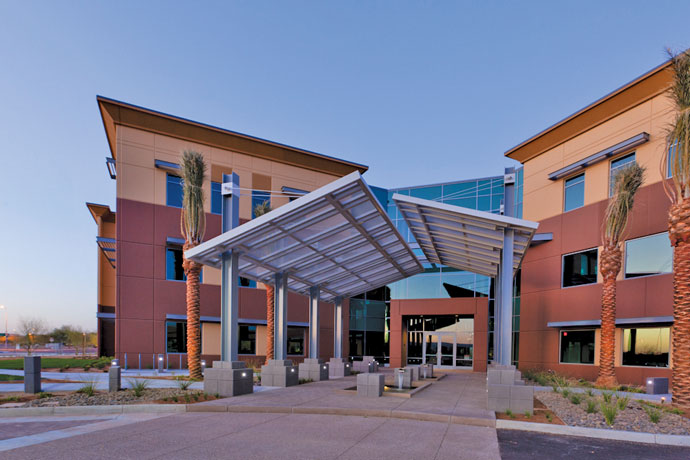 QBE First is moving 600 workers into this new facility in Chandler, Ariz.
Photo courtesy of Lee & Associates
A

Call it the virtualization of the modern call center. A recent study by Gartner Research forecasts that by the end of this year, at least three-fourths of all customer-focused call centers will use a form of the cloud for data storage and management.

The implications for location decision-making affecting the placement of call centers are profound, but it’s safe to say that broadband connectivity and on-the-ground telecommunications infrastructure will be paramount for any community seeking a competitive edge.

Over the past 24 months, the leading locations for new projects in this sector include Arizona, Colorado, Illinois, Texas and Canada, according to the Conway New Plant Database — the official corporate facility project database of Site Selection magazine.

These projects belong to companies like QBE First, an Atlanta-based division of an Australian insurance provider that recently expanded in Chandler, Ariz. QBE is moving 600 call center employees into 183,000 sq. ft. (17,000 sq. m.) of space in the Phoenix suburb, where the firm will have room for more than 1,000 workers.

Bill Blake, principal with Lee & Associates in Phoenix, worked with building owner Regent Properties on the lease and said the property offers QBE flexibility for growth.

“QBE First was open to looking at all of Maricopa County,” says Blake. “They had some employees already in the Chandler market. They evaluated other cities in the market and they felt that Chandler was the right fit for them.”

Blake says QBE liked the property for several reasons. “It has a well-above-average parking ratio. It has floorplates of 60,000 square feet [5,574 sq. m.],” he says. “It is a three-story building, and it gives QBE the ability to put very efficient workstations together on all three floors. They liked having everyone together in one building, and the facility is brand new.”

The property is part of the Chandler 202 Freeway Corridor and was originally being built to accommodate future growth for Bank of America. “BOA elected not to complete the building. They sold it to Regent Properties as an unfinished facility,” says Blake. “We were able to put the two groups together.”

The building has an operations center that was originally built to accommodate a three-building expansion for BOA. “It has much heavier AC and power support than what a single building would need,” Blake says. “It has two full generators for backup and an AC cooling tower that serves just this building.” QBE signed an 11-year lease with an option to go longer, notes Blake, adding that QBE will be the only tenant in the building.

That supply is also abundant in Omaha, Neb., a smaller market that has struck gold in the high-end niche of quality-control centers and Web-enabled customer contact centers. Inflection, headquartered in Redwood City, Calif., operates a 36-seat call center in Omaha and has plans to expand it.

“We work on making public records available to folks through the Internet,” says Michelle Steinbeck, senior director of member services for Inflection. “We digitize records. A lot of that is specialized data like court documents. We have several websites that we support. PeopleSmart.com is one of them.”

Inflection has just over 10,000 sq. ft. (929 sq. m.) in Omaha. “We will be able to expand to 88 workers soon and could even exceed that total with part-time help,” says Steinbeck. “We did our initial site selection four years ago, and then we acquired new space next to us in March. We needed more call center space, more restrooms and a larger server room.”

Why Omaha? Steinbeck says, “I am an Omaha native, and I know that the labor supply here is good and plentiful. The labor laws here in Nebraska are good, and there are lots of workers in this field in Omaha. The service providers for our data and phone lines are responsible and dependable.”

Steinbeck adds that Omaha “does not have hurricanes or earthquakes. It is a good weather location. Omaha, because of its suburban nature, has been developed in small pockets. It is like a string of suburbs. We can put centers in these various suburbs. Our center is in the southwestern part of Omaha.”

She also likes the Central Time Zone location. “My center is open from 6:00 a.m. to 7:45 p.m. each day,” she says. “We can reach all of our customers from coast to coast without making our people work crazy hours.”

“The labor laws here in Nebraska are good, and
there are lots of workers in this field in Omaha.”

Steinbeck says she has no problem finding good workers. “I look for people who have a couple of jobs with experience in customer service,” she says. “They understand that companies handle customer service in various ways and they have been trained multiple times.”

“We have had companies elect to come here because we have 180,000 college students in the area, and we have tremendously high language skills,” Conabee says. “We do business every day in Utah in about 130 languages. That’s pretty attractive to global companies trying to reach customers from all over the world.”

Adobe and eBay are each building a 40-acre (16-hectare), multi-building campus in the region. These huge complexes of 1,500-plus workers each will house high-end technical support operations, putting Adobe and eBay workers in touch with their clients around the world.

“Adobe is building an iconic new $100-million building at the juncture of southern Salt Lake County and northern Utah County,” notes Conabee. “The companies that come here are at the top of their field, and they like what they see in Utah right now.”