The Digbeth Police Station clock tower is a local landmark near Fazeley Studios in the Digbeth district of Birmingham.
Photo by Mark Arend

A city better known for its industrial grit puts that very trait to work in its Digbeth district, where digital and creative enterprises are clustering.

f one didn't know exactly where on Fazeley Street Fazeley Studios are located, they would be easy to miss. That's because the main entrance, a church door (to a former Unitarian Chapel), is as nondescript as those to the rest of the buildings in the Digbeth district of Birmingham, the U.K.'s second largest city. But once inside, the creative energy is palpable. That's because dozens of creative enterprises are using studio offices in space large enough to accommodate 2,500 people.

Digbeth retains its former industrial grit and lack of ambience. But that is a draw to the many "creatives" who work in the Fazeley complex, which is a sister development to the adjacent Custard Factory project, a suite of restored buildings on the site of a former — yes — custard factory. In both cases, historic buildings have been preserved and improved upon, with the end result being a 15-acre (6-hectare) cluster of creativity in an otherwise drab, but historic, part of central Birmingham. It's just steps from the site of the 7th century settlement that grew into today's metropolis. 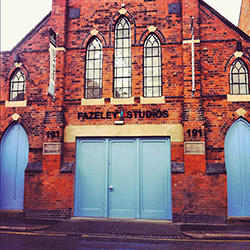 The main entrance to Fazeley Studios in Birmingham is a former Unitarian Chapel. Inside the 15-acre complex, creative business workers at dozens of enterprises are at work in studios on a wide range of digital entertainment and other endeavors.

"Birmingham is ideal for creative people," says Lucan Gray, who designed, developed and now operates Fazeley Studios. He's the son of Bennie Gray, who developed the Custard Factory arts and media production center. "It has all the facilities and things creative businesses need. It has an educated work force, and the educational institutions in the city are well established — the University of Birmingham is top level. The Birmingham City Council is the largest local authority in Europe, looking after about 1 million people. They act in a very decisive manner in organizing how the city works, to suit the future-facing industries, which are creative, digital media and so forth."

"Birmingham authorities are very clear that they want to transition from the past to the future. They have identified creative, digital industries as being very forward-facing sectors that can offer people live-end jobs rather than dead-end jobs."
— Lucan Gray, who designed, developed and now operates Fazeley Studios

Gray acknowledges that London, just 120 miles (192 km.) to the southeast, is "a world city that can beat Birmingham in many respects. But it can't provide the quality of life that mid-level employees might enjoy in a city like Birmingham. It's quite green with a lot of beautiful suburbs and is far more economical as a living proposition than a city like London. It has a great deal to offer, and certainly we have found over time, in developing space to attract creative and digital media businesses into the area, that there is huge demand for the kind of space we have created."

Gray designed and opened the studio in 2008, as Western economies including the U.K.'s were beginning to contract.

"But partly because the space is quite striking, we filled up very quickly — within just three or four months the building was full, and we had brought in about 45 creative businesses, amongst them Microsoft, which surprised me. I didn't think we would get them to come to what is in essence a regeneration project. I thought it was because of the design and décor of the space.

"But the Microsoft location decision maker said that wasn't it at all," Gray relates. "It was because of all the people that were here. It was the ecosystem of creative energy that with critical mass draws in more people. Many of the companies here are doing business they would not be doing if they were scattered in locations around the country. Being a part of a cluster is a very powerful thing for all businesses, but it's particularly true of creatives, who like to be surrounded by other creative people." Microsoft occupies only about 11,000 square feet (1,022 sq. m.), he says, "but that represents a big success to us, that they took seriously what we were offering."

Gray — a Londoner — says Birmingham is "a city determined to transform itself and one that has already undergone a huge amount of change." True that. Its Big City Plan has seen a slew of redevelopment projects come to fruition, and more are in the works in a more than 800-hectare (1,976-acre) section of the city center.

"Birmingham authorities are very clear that they want to transition from the past to the future. They have identified creative, digital industries as being very forward-facing sectors that can offer people live-end jobs rather than dead-end jobs, where they can work for people that enjoy going to work and don't see it as a burden."