‘One Heck of An Advantage’

How an Illinois county meets expanding
businesses’ most critical requirements. 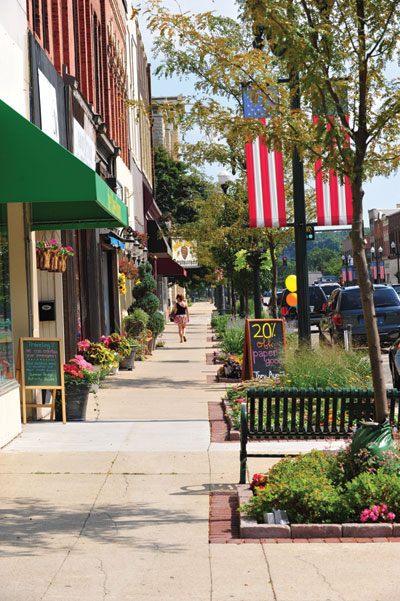 Ottawa is the county seat of LaSalle County, in north-central Illinois.
C

omprehensive logistics assets and a desirable work force are two criteria common to most site selectors’ wish lists. In LaSalle County, Illinois, that combination is driving corporate expansions and a new Community Technology Center at Illinois Valley Community College — the area’s primary higher education center and work-force training supplier. The county’s proximity to several major metro areas, including Chicago (Rockford, Joliet, Quad Cities, Peoria and Bloomington are the others), gives companies access to those areas’ talent pools as well. Finding qualified, trainable labor is not the challenge it is in many other Midwestern markets, say local executives at expanding enterprises.

An expansion at Eakas Corp., for example, will add more than 100 jobs to its current roster of 150 in Peru, in the western part of the county. The plastic injection molding company has made parts, such as door handles, for the automotive industry at the site since 1991. The expansion involves a new plating line. Existing customers include Mitsubishi in Bloomington-Normal and seven Toyota facilities; the new plating line means new business from Honda, Nissan and GM.

“Illinois Valley Community College has helped us tailor training programs to suit our needs, which has been a big advantage,” says Jeff Wagner, plant manager. “And the area is located such that we can attract people from the Chicago suburbs if need be. But we’re in a small town, and we like to support the local community. People here are willing to learn what they need to know. The area has a lot of talent, and we are doing our best to hold on to it.”

Ottawa is the county seat and home to a U.S. Silica sand facility that recently concluded a $50-million expansion that added about 50 jobs to the site’s 120-strong work force. Until recently, says Jon Sheridan, plant manager, the operation ran five days per week and on half a year’s Saturdays.

“Last October, we started operating 24 hours a day, seven days a week. Our capacity increased about 60 percent,” he relates. “The only way we could do that was logistics.” The plant is served by two railroads — CSX and Burlington Northern Santa Fe — and is located on the Illinois River, which connects the Great Lakes to the Mississippi River and the Gulf of Mexico. “Without those logistics assets, this expansion would not have taken place.”

Eakas Corp. is expanding its Peru facility in LaSalle County where it makes injection-molded parts for nearby automobile manufacturers, including Mitsubishi and Toyota. A new plating line will result in additional customers, including Honda, General Motors and Nissan.

U.S. Silica traditionally shipped about 65 percent of its output by rail and about 30 percent by truck; LaSalle County is at the crossroads of Interstates 80 (east-west) and 39 (north-south). A small portion was barged on the river, a portion that has in the last two years increased 60-fold, says Sheridan. “If we shipped four barges two years ago, we’re probably shipping 240 today. In our business, our plants are near where the mineral resources are, so this river location gives us one heck of an advantage over our competitors that are 40 miles away from the river.”

In addition to barge transport, U.S. Silica ships fine ground silica and whole grain sand on 60 to 80 railcars a day from the Ottawa location to oil and gas customers for fracking operations on the East Coast, in Texas, 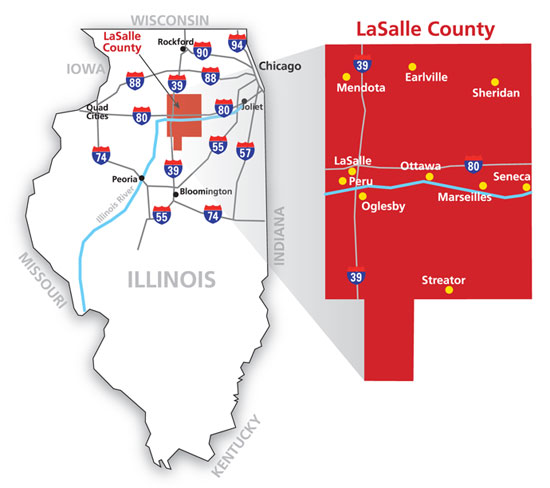 the Dakotas and other locations. Plants that can produce the proper sand product for these customers are seeing enormous demand, which would be very hard to meet without the area’s logistics advantages. “We are equidistant to those main customer locations,” notes Sheridan.

Staffing the new expansion was easy, he says. “For every person we hired, we probably had 20 applicants. It’s a well established labor market, and we could hire the cream of the crop.”

Much of the crop was cultivated at Illinois Valley Community College (IVCC), established in 1924, making it the second oldest community college in Illinois. “We are the only post-secondary institution within about a 50-mile radius, so most people in the community connect with the college in some way,” says Dr. Jerry Corcoran, president of IVCC, which serves about 8,000 credit students annually and about 3,000 non-credit students. IVCC is in the midst of building a new, 80,000-square-foot Community Technology Center that Corcoran says has grown out of the local needs of people for career and technical programs. “Many of our students come here for a one-year certificate or a two-year associate’s degree in applied science, and then they are ready to go to work,” he says.

Staff will move into the new center in the summer of 2013 with several programs set to commence in the fall. “There is a lot of evidence to support these technical programs, nine of which will be housed in the new Community Technology Center,” says Corcoran, including Computer-Aided Design, Computer Numerical Control Manufacturing, HVAC, Industrial Maintenance, Electronics, Industrial Electricity, Networking and Computer Repair, Operating Systems and Wind Energy Maintenance.

Manufacturers today require a different skill set today than they did a generation ago, when factory work was

Illinois Valley Community College is building an 80,000-sq.-ft. Community Technology Center that will be home to nine technical programs when it opens in 2013.

largely unskilled, Corcoran points out. “Today, they need people with a solid math background and the ability to use computers and electronics and so forth. Students finishing these programs can find a job with companies in this area or elsewhere where they can make a heck of a lot of money — in some cases up to $100,000 per year.”

Partnerships with local companies provide students with internships or apprenticeships that help them get their foot in the door. IVCC has these partnerships in place with such manufacturers as Illinois-based Caterpillar, who help make the case to students and prospective employees that they cannot be hired until they acquire the very skill sets available at IVCC. 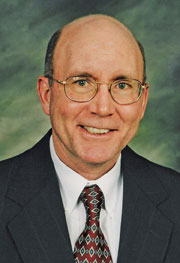 “The timing for rolling this building out is ideal,” says Corcoran. “There is something about a first class learning facility filled with cutting-edge technology and award-winning faculty that is an incentive for people to go to college, get some skills, go to work and contribute to the employer’s bottom line.”

LaSalle County is also home to several enterprise zones and offers about four dozen TIF tools for capital investors, notes Jerry Hicks, the County Board Chairman. “The hope is that they will bring in more people and more jobs, which creates more tax revenue and more demand for business services.”

LaSalle is one of nine Illinois counties to benefit from iFiber — a high-speed fiber optic project to bring better broadband connectivity to the north-central part of the state. “The chambers of commerce do get asked by potential businesses about Internet connectivity,” says Hicks. Wiring the county’s community anchor institutions, including schools, government, libraries, public safety, community colleges and health care providers, will meet that requirement. “In order to bring more businesses in, we have to offer the infrastructure they require.”

This investment profile was prepared under the auspices of the Illinois Valley Area Chamber of Commerce and Economic Development. For more on investing in LaSalle County, visit www.ivaced.org.