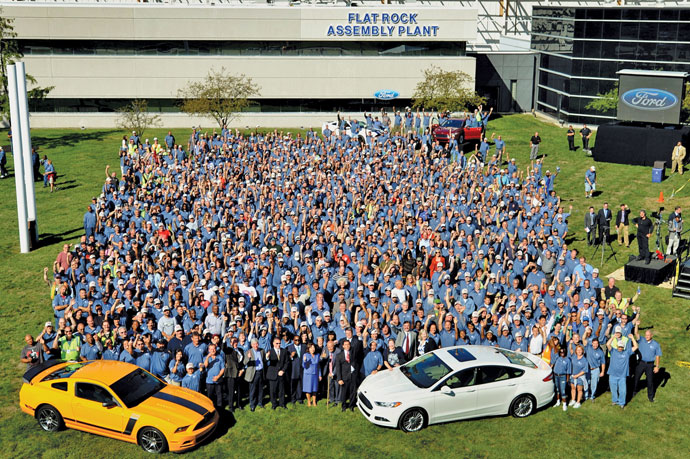 Ford Motor Co. opened a new era at its Flat Rock Assembly Plant on Sept. 10 by announcing that it will add 1,200 hourly jobs there.
Photo courtesy of Ford Motor Co.
T

he ink from Gov. Rick Snyder’s signature on House Bill 4003 and Senate Bill 116 was barely dry when reaction started pouring in to the legislation that will make Michigan the 24th right-to-work state on April 1, 2013.

Nationally prominent site selection consultants who advise Fortune 500 companies on where to locate their largest operations call the governor’s Dec. 11 action a decisive moment for Michigan.

“We believe there will be an enormous impact, especially for medium-tier companies who are poised to grow,” says Jason Hickey, principal of Hickey & Associates in Washington, D.C. “Regionally, greater competition with Ohio will be inevitable.”

Tracey Hyatt Bosman of BLS & Company in Chicago calls Michigan’s sudden change “a dramatic demonstration of the state’s commitment to the transformation of their business environment. It also will shine a big spotlight on all of the other work they have been doing, including overhauling their corporate tax structure, simplifying regulatory processes and bringing innovative approaches to economic development.”

Bosman echoes other site consultants when she adds, “Some companies simply insist on locating in a right-to-work state. Michigan’s new legislation removes a roadblock and will bring the state’s extremely skilled work force into consideration for more projects.”

Snyder himself noted, in signing the legislation, that the change was needed to improve Michigan’s business climate. “We must make Michigan more inviting to job providers so our families can enjoy more and better jobs,” the governor said on Dec. 11. “Introducing freedom-to-work in Michigan will contribute to our state’s economic comeback while preserving the roles of unions and collective bargaining … We will be a stronger, more vibrant state because of freedom-to-work, our improved tax structure, the balanced budget and other reforms that have put Michigan on the path to prosperity.”

United Auto Workers, the state’s largest industrial union, immediately put out a press release threatening countermeasures in upcoming elections and legislative sessions and signaled that the union would work to unseat Snyder in 2014.

Still, it was hard to find anyone in the site selection profession who saw a downside to Michigan’s swift reversal of decades of labor law.

“Where it will have an effect is when there are companies who are looking for locations, Michigan will no longer be eliminated because they are not a right-to-work state,” says Brent Pollina of Pollina Corporate Real Estate in Chicago. “As a result, there should be a significant increase in the number of projects that Michigan receives because they are no longer being eliminated at the early stages of searches.”

The change also sends a strong signal to business and industry, adds Pollina. “Michigan has had a bad reputation for business for a long time, and in the last year or so they have reformed their corporate taxes and passed right-to-work. This gives the appearance of a state that knows what their problems are and is actively trying to turn things around,” he says. “If they can capitalize on the press they have received, this could be a great marketing opportunity for the state to attract business.”

‘We Aren’t Done Yet’

The business climate reforms enacted by Snyder over the past two years have been credited with making Michigan more attractive to growing industrial firms.

One executive who’s noticed these changes is David Cataldi, president of Janesville Acoustics in Southfield. One of the world’s largest producers of acoustical and thermal fiber insulation and a major automotive supplier, Janesville Acoustics recently announced a $10-million investment to open a new 250,000-sq.-ft. (23,225-sq.-m.) manufacturing plant in Battle Creek for the making of felt parts for cars and trucks. The plant will create 225 jobs.

“We needed to be closer to our customers to have the pulse of the industry,” says Cataldi. “We are familiar with Michigan. When we started the site selection process, we looked at sites in Michigan, Indiana, Ohio and Kentucky. The types of parts we make are large, so we needed to be in close proximity to our customers — the large auto plants and the large auto suppliers.” 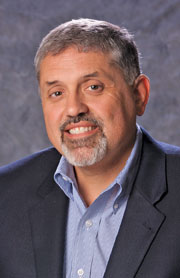 David Cataldi is president of Janesville Acoustics, which is equipping this facility in Battle Creek to become a key factory for the company.

The impetus for the project was a plant fire that destroyed all of the company’s assets at its factory in Newcomers Town, Ohio, about 50 miles (80 km.) south of Canton. “We had an immediate need to get back in operation as quickly as we could,” says Cataldi. “We needed to find an existing building, and the building had to be the right size to house our equipment. The other critical component was the work force. We needed to find the right level of technical resources with the skills required to keep our equipment working on the shop floor.”

Cataldi says he found everything he needed in Battle Creek. “The building there fit our layout. And its technical college is superb,” he says. “We heard nothing but rave reviews from local employers on how the college develops specific training programs for businesses.”

Cataldi says he expects his new plant in Battle Creek to open this month, with full operations set for fall. “We started the hiring process this past fall and began bringing in our initial work crews in November,” he adds. “The folks at Battle Creek Unlimited were great people to work with too. They answered all of our questions and helped us by working with the labor group for the state.”

The project received a $1.5-million Michigan Business Development Program incentive through the Michigan Strategic Fund, according to the Michigan Economic Development Corp.
Mike Finney, president and CEO of MEDC, says that Michigan is on a roll now, thanks to the many business climate reforms signed into law by the governor.

“The right-to-work legislation really complements all the ongoing reforms and reinvention that Michigan has been going through since Gov. Snyder came into office,” says Finney. “Regulatory reform, tax reform, workers’ compensation reform — this is just another significant reinvention tool. And we aren’t done yet.”

On Dec. 12, the Senate approved several bills aimed at phasing out the personal property tax on business. As of press time, more votes were needed in the Legislature before a complete tax reform package would be ready for the governor’s signature.

“We tax the personal property of businesses and it discourages companies from investing in operations here,” says Finney. “It can be onerous enough to encourage them to make investments elsewhere. That is why we want to pass this legislation. It is a significant pushback mechanism, especially for C-corporations in the state, and they all say it needs to be fixed.”