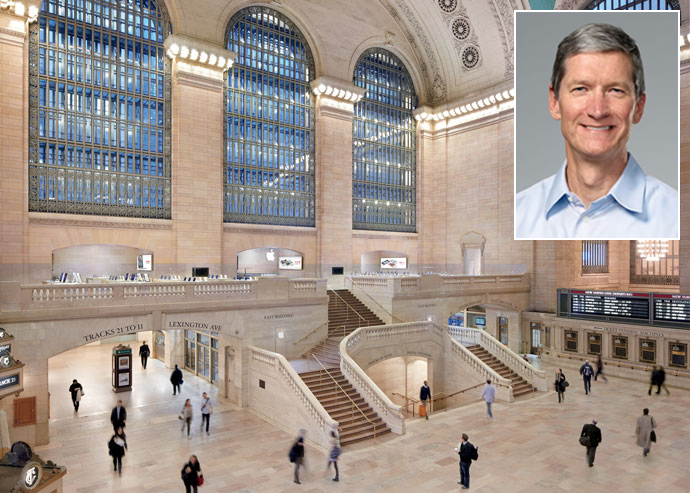 Apple CEO Timothy Cook (inset) in December said Apple wants to invest $100 million in making Mac components in the U.S. New York appears to be a lead contender for such work, whether or not it’s related to another pending semiconductor project. Meanwhile, the state can at least boast one of the country’s most resplendent settings for an Apple store. The Apple Store Grand Central, Apple’s fifth store in Manhattan, opened in early December, overlooking the historic Main Concourse of the world-famous Grand Central Terminal. It employs 315 people.
Photos courtesy of Apple

What’s the big idea? These snapshots from the Empire State reveal a few.

f the Mac’s coming back, could the Empire State be its destination?

In an interview with Bloomberg Businessweek in early December, Apple CEO Timothy Cook said the company would soon invest US$100 million to produce, probably via partners, some Mac computers and components in the United States.

The news happens to coincide with two other developments: a mystery semiconductor site search being led by Deloitte for a 3.2-million-sq.-ft. (297,280-sq.-m.) “Project Azalea,” and Apple’s known displeasure with chip supplier Samsung due to a major patent dispute over mobile-device technology. Both of those stories point to just a handful of possible companies, and Taiwan Semiconductor Manufacturing Co. (TSMC) leads the list. Also on that list are Intel and GlobalFoundries, whose new plant is located in the Luther Forest Techology Campus in Malta, near Saratoga Springs, that Deloitte has visited on behalf of Project Azalea.

Intel, Samsung, GlobalFoundries, IBM and TSMC were all part of a $4.4-billion project announced in the state in 2011 oriented toward a hub for next-generation chip research, with a new $400-million state-backed center at the University of Albany (a SUNY campus) and a new 165,000-sq.-ft. (15,328-sq.-m.) Computer Chip Commercialization Center at the SUNY Institute of Technology in Utica. Next door to that campus is a 420-acre (170-hectare) technology park called the Marcy Nanocenter, also rumored to be in the running for a mega-project. Meanwhile, up in Malta, GlobalFoundries now employs some 1,800 people manufacturing computer chips.

While speculation on the state’s high-tech prospects continued as the year drew to a close, there were plenty of other concepts breaking real ground.

Eleven months after Gov. Andrew Cuomo announced that the state would offer national and global industries up to $1 billion in multi-year economic development incentives to come to Buffalo, the Western New York Regional Economic Development Council (WNYREDC) on Dec. 4 presented him with its Buffalo Billion Investment Development Plan. Advanced manufacturing and health sciences are key planks in the plan, but every indication is that growth is already happening.

That same day, Cuomo announced that the state will invest $50 million in biomedical research equipment and facilities, and has secured an agreement from Albany Molecular Research Inc. (AMRI), to locate a new drug discovery R&D center at Buffalo Niagara Medical Campus. The state’s investment will leverage $200 million in private investments and create 250 jobs. AMRI already employs 700 New Yorkers and has invested almost $200 million in the Albany and Syracuse regions since its founding in 1991. The new initiative includes partners Jacobs Neurological Institute of the University at Buffalo (UB) and the College of Nanoscale Science and Engineering, based in Albany.

In November, UB announced the purchase of the first of several downtown parcels to make way for construction of the new $375-million University at Buffalo School of Medicine and Biomedical Sciences. To be designed by HOK, the school is expected to break ground in September 2013. In September 2012, the school held the grand opening of its Clinical and Translational Research Center CTRC) in the joint UB-Kaleida Health building in downtown Buffalo. In total, both the CTRC and new medical school projects will create more than 3,000 jobs. 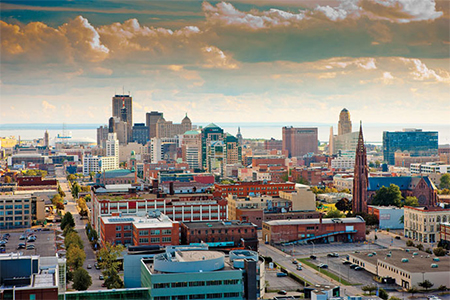 Downtown Buffalo, seen here from the roof of Buffalo General Hospital, is seeing a host of university- and downtown-related life sciences investments.
Photo courtesy of University at Buffalo

September also saw the opening of the UB School of Management’s Center for Entrepreneurial Leadership in the UB Downtown Gateway. And in July, National Grid became the first company in Western New York to commit direct support to the Buffalo Building Reuse Project, an initiative undertaken by the Buffalo Niagara Partnership at the request of Buffalo Mayor Byron W. Brown to improve the competitiveness of downtown Buffalo by attracting new investment and creating a development process and structure for long-term sustainability.

Growth in the Yards

Construction has commenced on the first 1.7-million-sq.-ft. (157,930-sq.-m.), 47-story tower, the future home of Coach Inc.’s world headquarters. The anticipated LEED Gold tower, designed by Kohn Pedersen Fox Associates, will be completed in 2015.

In May of 2010, Related and Oxford signed a contract with the city’s Metropolitan Transit Authority for the 13 million sq. ft. (1.2 million sq. m.) of development rights at the Hudson Yards. Coach Inc. is purchasing nearly 740,000 sq. ft. (68,746 sq. m.) of the South Tower which will create a vertical campus with a soaring atrium serving as the visual anchor for the High Line.

“Coach continues to expand both in America and around the world, underscoring the need for a new global headquarters that is as modern and dynamic as the brand itself,” said Lew Frankfort, chairman and CEO of Coach Inc. “The headquarters will reflect Coach’s key attributes of innovation, quality and collaboration, enabling Coach to efficiently consolidate its operations under one roof.”

Brooklyn Navy Yard is making the news too, in part because of increasing activity in film production and post-production. Gov. Cuomo’s office said in November that a record 24 productions have chosen New York State for their post-production work as a result of new legislation the Governor championed, and signed into law, last July. Among other measures, the new law increased the available post-production credit from 10 percent to 30 percent in the New York metropolitan commuter region.

“A little over a decade ago, New York City struggled to attract the lucrative production industry to film here,” said Bloomberg. Now, he said, it’s hard to keep up with demand. In 2011, 188 films shot on location in New York City, as well as 140 television series.

But Is it Artisanal?

Some of the site’s growth is not on screen but in three dimensions. In May, Bloomberg, Cuomo and others announced that the Brooklyn Navy Yard Development Corp. will invest $46 million to build a Green Manufacturing Center in the Navy Yard. Body armor and military apparel maker Crye Precision and design and manufacturing firm Macro Sea will be its anchor tenants. They’re just two of the dozens of “mini-manufacturers” that have contributed to a Brooklyn industrial renaissance, albeit of the prototypical Brooklyn “artisanal” variety.

“We started here a decade ago with 4,500 square feet [418 sq. m.],” said Crye Precision Executive Director Caleb Crye. “Today we’re up to 45,000 square feet [4,180 sq. m.] with more than 100 employees, and when the new facility is complete we’ll have a more efficient operation with room to grow and add at least 100 new jobs.” The Brooklyn boom has meshed well with Mayor Bloomberg’s Applied Sciences initiative and other projects in helping the city “punch above its weight,” even if it’s one of the nation’s biggest.

“Look at it this way,” said Bloomberg in an October 2012 radio address. “Although our city has less than 3 percent of America’s work force, so far this year we’ve accounted for nearly 8 percent of all the new jobs created in the nation. In fact, we’re on track to create more jobs in our city during 2012 than in any year since figures starting being recorded, some 50 years ago.”

Small-tech — in contrast to the big tech mulling the Upstate — is a big reason. Between 2007 and 2010, the number of workers in digital media firms in the city grew by 74 percent. 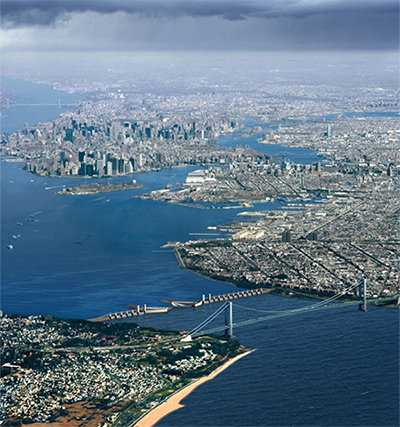 n the aftermath of superstorm Sandy, serious discussion has begun about erecting actual seawalls to protect metro New York City from future storm surges. The artist’s rendering here depicts the seawall concept developed by ARCADIS. New York City Council Speaker Christine Quinn, a front-runner for the mayor’s office that Michael Bloomberg will leave next year after 12 years, has put forward a $20-billion plan that includes such a barrier, which could cost as much as $16 billion to construct.

New York City has 520 miles (836 km.) of shoreline. Bloomberg on Dec. 6 directed Seth Pinsky, the president of New York City Economic Development Corp., to “develop concrete recovery plans for the communities Sandy hit hardest as well as a specific and comprehensive action plan to prepare our city for the climate risks we face.” He also said ConEd had pledged an initial investment of $250 million to “to significantly harden its electric, gas and steam systems.”

ARCADIS has been involved as much with the current recovery as with futuristic concepts. It deployed its debris management personnel and HaulPass digital inventory technology to 14 communities in New York and New Jersey. The firm has hired more than 120 local temporary workers to help oversee the cleanup effort that had collected 41,000 tons and 357,000 cubic yards of debris as of the end of November. ARCADIS was contracted to help manage the massive task of removing an estimated 12 million cubic yards of debris.