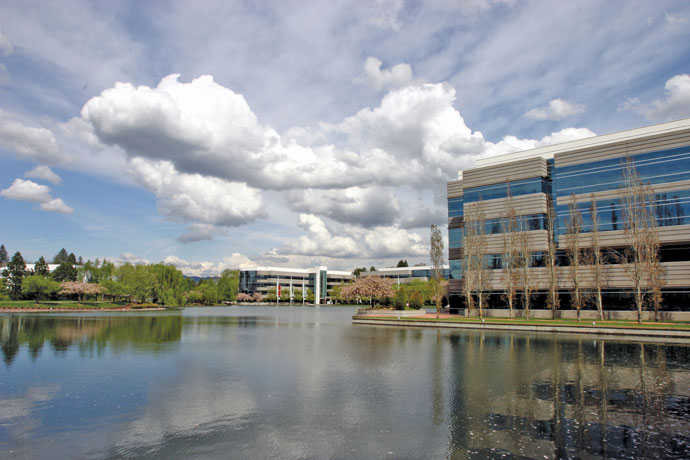 After finding space in various leased and purchased buildings over the past few years, Nike Inc. is poised to invest in a major expansion of its headquarters campus in the Portland suburb of Beaverton, Ore.
Photo courtesy of Nike
W

“elcome to NikeTown!,” read the signs outside the Oregon state capitol in Salem in December.

Had the company moved? No. It had stayed right where it was.

The signs were held by protestors upset that a special legislative session costing $13,000 had been called in order to authorize Gov. John Kitzhaber to enter into agreements with companies committing to significant job growth and investment in Oregon. Like many such sessions in other states, the sudden meeting was connected to one company and one project: Nike Inc. and its planned 500-job, $150-million expansion at its suburban Portland headquarters in Beaverton, which first opened in 1990 along with the first actual NikeTown retail concept, also in Portland.

“In fact, Nike is ready to commit to a significant expansion of its Oregon operations if the state can provide certainty we won’t change tax rules after they make a new investment,” said Gov. Kitzhaber on Dec. 10 when he called the session. “It’s an easy call and a perfect fit with our strategy to attract and retain companies that create jobs and boost per capita income.”

The approval of that authorization via the Economic Impact Investment Act meant, among other things, that the state’s single-sales-factor tax scheme would stay in place.

Nike’s employment in Oregon has grown 60 percent since 2007 with an average annual compensation of over $100,000, about double state and regional averages, said a governor’s office statement, taking into account contract work. A recent analysis by global services firm AECOM estimates the economic impact of a potential expansion to be more than $2 billion a year and more than 12,000 jobs by 2020. Construction alone accounts for about $440 million and more than 2,900 jobs.

“We’ve been focused on finding ways to boost wages, and the Economic Impact Investment Act will be a powerful tool to drive per capita income up in Oregon,” said Oregon Business Association President Ryan Deckert. Unemployment rates for construction workers in the state have hovered around 20 percent.

The only statement Nike has made publicly was to thank the legislature for acting quickly and decisively. “This is a very positive step forward, not only for our company but for the state of Oregon,” the company told The Oregonian. But the company’s statements via real estate and facility decisions have hinted that such an expansion could be around the corner.

According to Site Selection’s New Plant Database, Nike’s investments since 2007 have included new manufacturing and distribution moves in Vietnam, China and Belgium; a customer service center via Stream International in Iowa; and three different investments in distribution facility expansion in Memphis, the most recent just announced in October.

According to The Oregonian, late changes to the new law included shortening the maximum contract period from 40 years to 30, and changing language so as not to exclude another hub employer, Intel, which in October announced it was essentially doubling its previously announced $3-billion investment in the D1X fab project in Hillsboro.

Depending on who’s counting, Oregon accounts for between 18 percent and 21 percent of Nike’s global work force of 38,000. In its fiscal 2013 first quarter ended August 31, 2012, Nike reported a 10-percent hike in revenues, to $6.7 billion, but a drop in gross margin and an increase in selling and administrative expenses. It reported that its effective tax rate had risen to 27.5 percent compared to 24.3 percent for the same period last year. “The effective tax rate was higher due to a larger percentage of earnings coming from higher tax countries, primarily the United States,” said the company, “as well as a higher effective tax rate on operations abroad.”