Heart
Of the Matter

Snapshots of a state’s energy past, present and future. 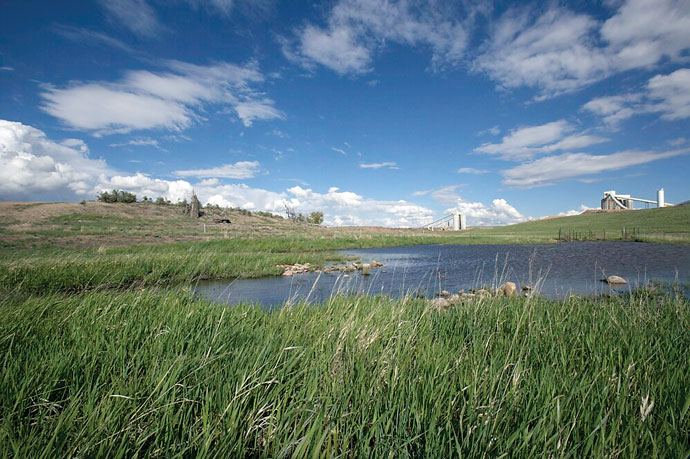 Peabody Energy’s flagship North Antelope Rochelle Mine in Campbell County, Wyo., was one of two Peabody mines to be recognized in August with U.S. Department of the Interior 2012 Excellence in Surface Coal Mining Reclamation Awards.
Photo courtesy of Peabody
by ADAM BRUNS
T

his fall, Wyoming Gov. Matt Mead presided over the opening of the $70-million National Center for Atmospheric Research west of Cheyenne, while also formulating a new energy strategy. The state’s more than 42 billion tons of recoverable coal reserves continue to play a major part in energy strategy and in the atmosphere, not to mention the state’s high-ranking business climate and fiscal soundness.

At the current mining rate of 12 tons per second, that means 110 years of coal production ahead.

In November, 24/7 Wall St. published its annual list of best-run states, and ranked Wyoming second in the nation (behind fellow energy powerhouse North Dakota), based on such factors as its lack of a corporate income tax and its efficient debt management (owing just over 20 percent of annual revenue in fiscal 2010). The mining industry, which includes oil and gas extracting, accounted for 29.4 percent of the state’s GDP in 2011, more than in any other state.

The Energy Information Administration’s Annual Energy Outlook 2010 predicted coal’s share of energy production in 2034 will be 44 percent. But a preview released in December of the EIA’s 2013 Outlook shows a small but steady rise in coal production between now and 2040, with coal exports and a resurgent use of coal for domestic power production expected to kick in around 2016 after a lull due to low natural gas prices.

The potential for coal export to Asia is great, and, despite resistance from environmentalists, coal export terminal projects involving both Arch Coal and Peabody Energy are proceeding forward in the State of Washington. The amount of coal Peabody Energy produces in the Powder River Basin each year — 140 million tons — happens to be the projected annual amount of coal that coal producers anticipate being able to export to Asia within the decade.

Wyoming isn’t just a place to load and leave. It’s a place to learn. And that includes research and projects involving coal. The DKRW coal-to-liquids project near Medicine Bow is well on the way to starting construction. New developments are coming in Integrated Gasification Combined Cycle (IGCC) technology. And the University of Wyoming is collaborating with private industry and the U.S. Department of Energy to research carbon capture and sequestration, as well as clean coal technology.

Construction on the High Plains Gasification Plant scheduled to begin in 2011 was temporarily halted due to uncertainty in U.S. energy policy. The joint initiative between GE and the University of Wyoming was developed to test the conversion of coal to synthetic gas for power generation and to liquid fuels and chemicals. But the school is pursuing energy leadership on other fronts, including a record enrollment of petroleum engineers this year (219, up 50 percent) and a novel project from Microsoft, which recently launched a new data center in the state.

Called the Data Plant, the $7.5-million project on the UW campus in Cheyenne is a mini data center constructed by Microsoft to replicate a data center environment.

As a university release explains, “the Data Plant’s 300-kilowatt fuel cell will be powered by methane biogas produced from wastewater at the Dry Creek Water Reclamation Facility in Cheyenne.

The fuel cell, provided by Fuel Cell Energy Inc., will, in turn, provide about 200 kilowatts of energy to power the Data Plant’s 200 computer servers. Excess electricity from the fuel cell will be delivered back to the wastewater treatment plant to reduce its electrical bills. After 18 months, Microsoft, as a condition of receiving state grant money for the project’s infrastructure, turned over the Data Plant to the city and university to be used for further study and demonstration of mature technologies.

Gov. Mead is doing his share of learning too. Four themes have emerged as central to his nascent energy strategy: economic competitiveness, expansion and diversification; efficient, effective regulation; reclamation and mitigation; and education, innovation and new technologies.

“This strategy should lead to good jobs and a strong economy by providing affordable, abundant and reliable energy,” said Mead in November, even as he continued to search for a new state oil & gas supervisor. “At the same time it must allow us to maintain our world-class wildlife, recreation, agriculture, open space, clean air and clean water.”

According to the Western Organization of State Resource Councils and state regulators, as of 2010, 162,249 acres (65,662 hectares) of land in Wyoming had been disturbed by mining, and just 4 percent of that acreage had been sufficiently reclaimed to warrant final bond release. But some of that reclaimed land has gone above and beyond. In August, Peabody Energy’s flagship North Antelope Rochelle Mine (NARM) in Campbell County was one of two Peabody mines to be recognized with U.S. Department of the Interior 2012 Excellence in Surface Coal Mining Reclamation Awards. NARM was honored for a multi-faceted approach to sustain populations of eagles, hawks, owls and other birds of prey through creation of high-quality habitat and protection of nesting areas.

Peabody said in August that during the past year it had spent more than $290 million restoring more than 5,100 acres of mined lands globally.

As of May 2012, St. Louis-based Peabody controlled 3.3 billion tons of Southern Powder River Basin coal reserves. NARM, where Peabody recently finalized further coal leases, is the largest and most productive coal mine in the world, shipping 109 million tons in 2011, says the company.