All indications say, 'Yes,' especially in the U.S.

hances are, any manufacturing still alive today is "advanced" by definition. Competition and complexity — both driven by big data — continue to threaten and cajole industry in equal measure. And certain industries, companies and territories are responding better than others.

A survey of recent research and initiatives reveals where they're overlapping and, hence, where manufacturing stands to gain much more than a toehold when it comes to an innovation footprint.

A study released by the NAIOP Research Foundation in early June concludes that the reshoring trend of manufacturing industries to the United States yields stabilization of jobs, but not net growth. That said, some industries will add jobs as others shed them, and the longer-term trend is decidedly toward the positive: The manufacturing sector is expected to level off at an employment level of roughly 11 million jobs between now and 2020, after losing 6 million jobs between 2000 and 2010. 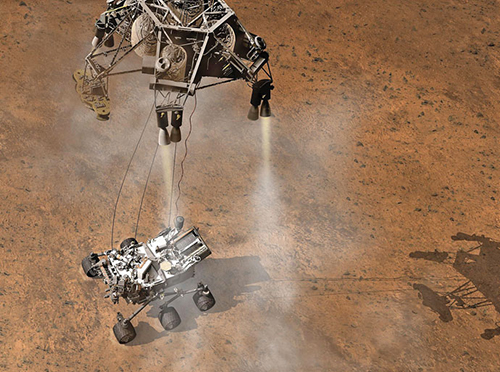 "Employment stabilization across the manufacturing sector bodes well for the overall economy and creates opportunity for real estate," said Thomas J. Bisacquino, NAIOP president and CEO. "Rising wages in countries like China, increasing global transportation costs and political instability abroad are all factors affecting the decision to remain [in] or return to the United States."

What's going to grow, and where? NAIOP weighs in on that question too, with projections (p. 76) that resonate with recent trends in Site Selection's New Plant Database: a resurgence of projects in the Great Lakes and Upper Midwest, and a continuing surge of projects in the Southeast, where the labor-intensive industry long associated with the region long ago began evolving to more advanced forms.

One region in the Southeast is apparently ready to roll.

The first products will be stationary high-pressure turbine parts for the next-generation LEAP jet engine manufactured by CFM International, a joint venture between GE Aviation and France's Safran.

Engineers at GE Global Research and GE Aviation's plant-size ceramics laboratory in Delaware developed the material over the last 20 years. They also designed the machines to manufacture CMCs. Pending final approval from the state of North Carolina, the Asheville facility would be the first of its kind in jet propulsion. 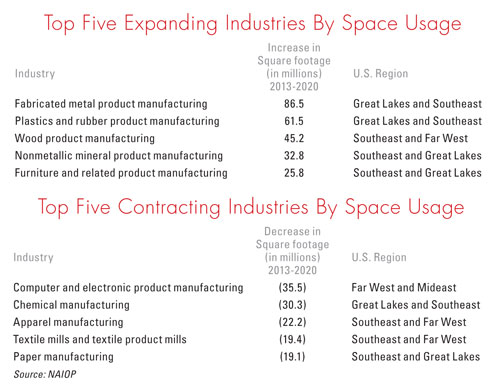 The Delaware plant in Newark is receiving its own $27-million investment to develop advanced manufacturing methods for the CMCs. The investment will add 70 jobs over five years to the facility's payroll of 80.

GE plans to use the Delaware lab and a manufacturing test bed to supply the Asheville plant with flexible CMCs sheets made from ceramics-coated carbon fibers bound together by a plastic polymer.

Workers in North Carolina would then cut the sheets into shapes, put them inside molds and pack them tightly together in giant pressure cookers called autoclaves, which make the parts take their form. GE estimates that the new plant, along with plant and equipment upgrades across GE's facilities in North Carolina, could create 240 new jobs by 2017.

Any effort to track advanced manufacturing's advances would do well to start with the effort, capital and time devoted to the cause by two of the world's corporate giants: GE and Siemens.

Since Jan. 2009, Site Selection's New Plant Database has tracked 51 facility investments from Siemens, nearly all of them involving some aspect of manufacturing, in such locations as Charlotte, N.C.; Shanghai; Israel, India and Russia. In the same time frame, we've tracked 106 that involve GE in whole or in part, making everything from solar panels in Aurora, Colo., to turbines in Oslo, Norway, and medical devices in Songdo, South Korea.

Some of GE's investment is just down the road from Asheville in Hendersonville, N.C., where a recent $35-million investment in improved manufacturing efficiency and speed helped GE Lighting built and deliver 1,000 HID street lighting fixtures in one day when demand spiked after Superstorm Sandy struck the East Coast in 2012.

In April, GE Aviation opened two new advanced manufacturing plants in the South: a carbon-fiber composites factory in Ellisville, Miss., and a "super-alloy" plant in Auburn, Ala., that will manufacture super-alloy blades for high-pressure turbines. The company has invested $130 million in the plants and plans to hire 550 workers at the two operations by 2017.

GE is becoming one of the largest manufacturers of advanced composites in the U.S. The company now has four composite plants, including one in nearby Batesville, Miss., which already employs 350 workers.

GE's bets on manufacturing follow CEO Jeffrey Immelt's stint as chair of The President's Council on Jobs and Competitiveness, established in 2011 and allowed to expire after its two-year charter early this year. In a statement to Bloomberg, Immelt said, "Progress has been made on 90 percent of our recommendations — infrastructure projects have been fast-tracked, regulations are being reviewed and evaluated, and the process time at the Patent and Trademark Office has been accelerated."

"Rather than pare back our investments
in new technology during the recession,
GE doubled down on its commitment."
— Mark Little, GE's chief technology officer

The dissolution of the Council doesn't mean the Obama Administration is moving away from manufacturing, however. President Obama in May followed up the 2012 establishment of a manufacturing innovation institute in Youngstown, Ohio, with the launch of competitions to create three new manufacturing innovation institutes by the end of this year with a federal commitment of $200 million across five federal agencies — Defense, Energy, Commerce, NASA, and the National Science Foundation. The Department of Defense will lead two of the new Institutes, focused on "Digital Manufacturing and Design Innovation" and "Lightweight and Modern Metals Manufacturing," and the Department of Energy will be leading one new institute on "Next Generation Power Electronics Manufacturing."

Ultimately the administration is looking to Congress to back a $1-billion bet on 15 such institutes across the country. The President's FY 2014 budget prioritizes NIST research in advanced manufacturing and crucial cybersecurity initiatives.

GE ushered in spring in April with the launch of two production lines for high-efficiency frontload washing machines at its Appliance Park complex in Louisville, Ky., which has made topload machines for 60 years. The new lines came about because of a $100-million investment, and mean about 200 more jobs at the complex, where GE in 2010 pledged it would invest $1 billion to transform its U.S. appliances business and products. Since that announcement, GE Appliances has hired 3,000 new employees in Louisville, 2,500 in 2012 alone. 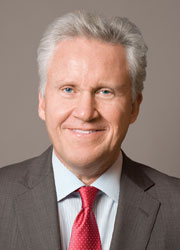 This summer, the Louisville growth was complemented by the signing of a master agreement between GE Appliances and the University of Kentucky in Lexington to collaborate on research projects that could yield new inventions in the field of major appliances.

A Nov. 2012 ribbon-cutting in Slater, Mo., celebrated the addition of 115 new jobs in the town of 2,000, where GE has manufactured filtration technologies since 1975. In addition to these new jobs, over the next five years, GE plans to invest nearly$11 million to improve its facilities in the area.

Designed to meet cGMP requirements while optimizing manufacturing flexibility and productivity, the 1,200-sq.-m. (12,917-sq.-ft.) facility is pre-fabricated and delivered with a complete ready-to-use production line, and can be planned, delivered and constructed in 14-18 months instead of a more traditional time frame of 24-36 months.

Last but not least, one of GE's original innovation hubs — Schenectady, N.Y. — last year saw the launch of a $100-million high-tech battery manufacturing plant, three years after GE Healthcare opened a $165-million plant at the Rensselaer Polytechnic Institute (RPI) Tech Park in North Greenbush, N.Y., where workers manufacture digital X-ray detectors. Both technologies were developed at GE Global Research in Niskayuna, N.Y., which has gone through its own $150-million upgrade.

"Rather than pare back our investments in new technology during the recession, GE doubled down on its commitment, which allowed us to expand our manufacturing base here in the Capital Region and add 1,400 local jobs over the last three years," said Mark Little, GE chief technology officer, last summer. A GE release noted, "the new growth also helped put the area on the map last year as the metropolitan region with the highest concentration of clean-tech jobs in the nation, according to the Brookings Institution."

The 2013 Manufacturing and Logistics Report Card, an in-depth analysis from Ball State's Center for Business and Economic Research, was released in June. Among its various indices is the measurement of productivity and innovation reflected in the map below. 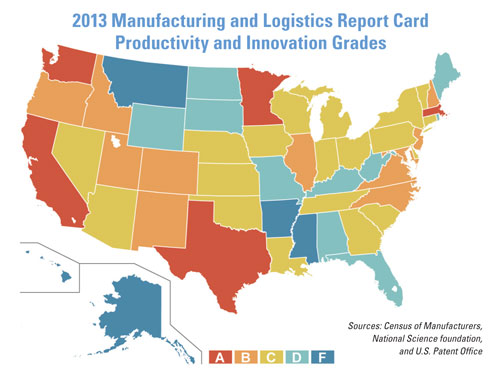 "Though innovations and inventions are aggressively sought from across the globe, the presence of local talent in these areas through access to university laboratories and non-profit research activities plays an important role in location decisions by manufacturers," said the report. "To measure productivity and innovation, we use manufacturing productivity growth, industry research and development expenditures on a per capita basis, [and] the per capita number of patents issued annually."

Like GE, Germany's global giant Siemens is pursuing the twin goals of enhancing its own manufacturing operations while also developing new products to enhance the operations of its customers.

"Never before has the world of manufacturing and production technology been changing as rapidly and fundamentally as today," said Siegfried Russwurm, CEO of the Industry Sector and Siemens AG Board member, at the Hannover Messe conference in April, noting also that "the completely IT-based interaction between human being, product and machine could prove to be a real industrial revolution."

Like GE's, Siemens' project list is noteworthy for its mix of established and emerging markets. In other words, a regional economy doesn't necessarily need to be at its most advanced stage to welcome advanced manufacturing.