Arkansas is a lot more than ground zero for everyday low prices.
Three companies explain why. 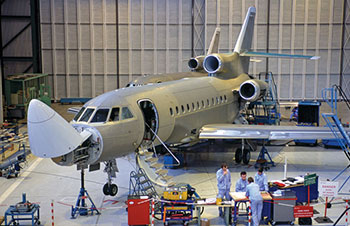 Dassault Falcon Jet announced May 29 that it will invest $60 million into expanding its aircraft assembly plant in Little Rock.
Photo courtesy of Dassault
W

hat do the world's largest retailer, an entrepreneurial steel industry executive and a French jet manufacturer all have in common?

A lot of faith in the Arkansas work ethic.

The biggest economic development news in Arkansas these days revolves around three companies: Walmart, Big River Steel and Dassault Falcon Jet. Collectively, these three behemoths stand to permanently change, for the better, the economic landscape of The Natural State.

It's a story of faith, fire and the mighty Falcon.

Of course, when you're a $470-billion company that employs 2 million people around the world, it's easy to have faith, but in this case the Bentonville, Ark.-based Walmart is expressing a newfound belief in the industriousness of the American factory worker.

Earlier this year, Walmart announced that it will boost its sourcing of U.S.-made goods by $50 billion over the next 10 years — a commitment that's sure to lengthen the hiring lines at many American factories and precipitate more than a few plant re-shoring decisions.

In an exclusive interview with Site Selection, Greg Hall, vice president of U.S. sourcing and manufacturing at Walmart U.S., says that the world's No. 1 retailer will work with the federal government and various state governments to attract more manufacturing plants back to the U.S.

Hall says Walmart's pledge stands to benefit Arkansas substantially. "In May, Walmart partnered with Gov. Mike Beebe to launch a program in Walmart stores called ‘Arkansas' Own,' highlighting consumer products created, processed and produced in the state. Walmart's goal is to create awareness and drive consumer interest in Arkansas products and help the vendors and suppliers in our home state."

Walmart carries more than 1,700 items that are made in Arkansas. Those products include 73 brands from 44 suppliers, ranging from household names like Tyson, Gerber, Stouffers and Huggies to smaller, lesser-known brands.

While the Walmart Buy American campaign may take a while to jumpstart factory expansions locally, one project that's sure to create a widespread ripple effect throughout the Arkansas economy is the appropriately named Big River Steel plant in Osceola in Mississippi County.

Big River Steel LLC announced Jan. 29 that it will build a $1.1-billion steel mill that will employ more than 500 workers at an average annual wage of $75,000. The state won the project by offering a $125-million bond package that includes a $50-million loan to Big River Steel; $50 million for site preparation; $20 million for costs associated with piling; and $5 million for the cost of the bond issuance.

"This is the largest deal in the history of Arkansas," says Clif Chitwood, economic developer for Mississippi County. "The site is located on the lower Mississippi River. We actually began marketing it about a decade ago. ThyssenKrupp looked at it years ago before they chose Mobile, Ala."

John Correnti, CEO of Big River Steel and formerly with Nucor, tells Site Selection that the 1,300-acre (526-hectare) site met every one of his location criteria for the project.

"First is access to my market, my customers. Arkansas has a lot to offer. It is almost smack dab in the center of the U.S. Second is access to raw material," he says. "We have to bring in close to 2 million tons of raw material — mostly scrap metal and some pig iron. Freight cost is only $5 a ton by barge, compared to $45 to $50 a ton by truck. Third is power. We will use 400 megawatts of electricity, and so rates are critical. We must have reliable and economical electrical power rates. Here, we will have access to a very economical rate through the Entergy Arkansas Corp."

The Arkansas Public Service Commission approved the proposed rate package for Big River Steel on May 16. Mike Maulden, director of external affairs for Entergy Arkansas, says that the electric contract "is not a standard tariff. Entergy and BRS negotiated it over a few months and submitted it to the PSC, which then issued its approval. We also need approval to build the substation and transmission line."

If all goes as planned, construction should begin in August or September, he says. The plant, expected to generate 2,000 construction jobs, is scheduled to open in the summer of 2015.

Mississippi County and the City of Osceola chipped in with incentives too. The city package came to $2 million, while the county offered $12.4 million. Other crucial location factors, according to Correnti, included natural gas costs, rail and highway access, and the availability of a qualified work force.

"We looked at about 55 sites," he says. "We looked at Texas, Mississippi, Tennessee, the Carolinas, and up and down the Mississippi River. Big Muddy was very attractive to us."

Grant Tennille, executive director of the Arkansas Economic Development Commission, says BRS started out looking at 10 states. "It came down to two sites in Arkansas and one in Mississippi before they selected the site in Osceola," he says.

Tennille celebrated more big news May 29 when Dassault Falcon Jet announced plans to increase the size of its completion center in Little Rock to accommodate final assembly of more Falcons. Over the next three years, the French company will invest $60 million into the capital city facility. The 250,000-sq.-ft. (23,225-sq.-m.) expansion will bring the total Dassault footprint in Little Rock to 1.25 million sq. ft. (116,125 sq. m.) and could add up to 300 jobs at the plant.