As East As It Gets

Newfoundland and Labrador leads the way in a region capitalizing on energy, resources and growing attention from overseas investors. 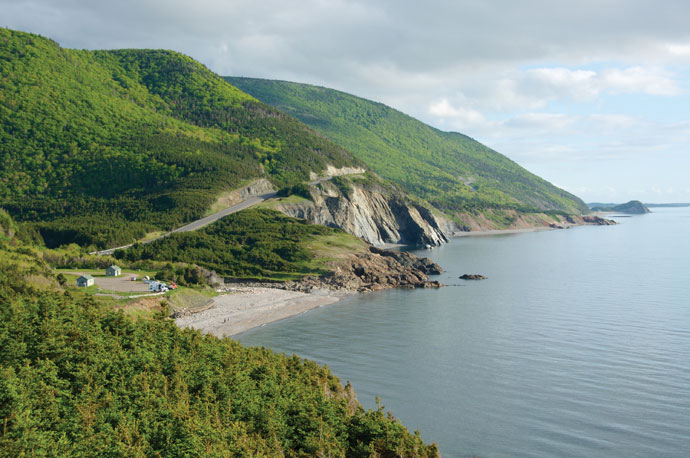 Cape Breton Highlands National Park is known for its spectacular ocean scenery. According to the Canadian Tourism Commission 2012 Annual Report, tourism accounts for 608,500 jobs nationwide, and in 2012 generated more than $82 billion in revenue.
Photo courtesy of Province of Nova Scotia
by ADAM BRUNS
Early June saw the release of the 2013 Major Projects Inventory by the Moncton, N.B.–based Atlantic Provinces Economic Council. A major project is defined as any capital project, including public-sector, valued at $25 million or more ($10 million or more in Prince Edward Island). The 2012 MPI identified 357 major investment projects across Atlantic Canada with a value of $100 billion. This year those numbers totaled 388 projects valued at a record $115 billion.
The following excerpts highlight findings from the complete report, which can be ordered via the APEC website at www.apec-econ.ca.

The rise in major project investment potential is largely due to the increase in the estimated costs of several projects in Newfoundland and Labrador along with a new LNG export plant proposed for Nova Scotia. Energy-related investments account for an estimated $6.6 billion or 44 percent of 2013 major project spending in Atlantic Canada. That figure is up 25 percent over last year and is expected to rise again in 2014 to over $7.5 billion as the $14-billion Hebron offshore oil project and the $7.7-billion Muskrat Falls hydropower project, both in Newfoundland and Labrador, increase activity.

Newfoundland and Labrador continues to dominate activity in the region. APEC has identified 113 projects in the province totaling $54 billion, a 12-percent increase over last year's inventory. They include the final year of construction now under way for Vale's $4.25-billion Long Harbour nickel processing facility. Among the highlights in other provinces:

APEC has identified 156 projects totaling $40 billion, up 23 percent over last year. The increase is largely due to a proposed $5-billion LNG export facility by Pieridae Energy in Goldboro.

APEC has identified 75 projects totaling $18.9 billion, up 6 percent this year. The increase is due to a proposed oil pipeline, a rise in a potash project's value and new potential energy projects. A large highway project between Saint John and the US border was completed in 2012.

The value of current-year major project spending in 2013 is up 10 percent to $287 million. The rise in current-year spending is due to a $60-million wind farm project planned by PEI Energy Corp.

But continuing investment in the oilsands of Alberta continues to draw skilled energy labor.

"In 2012 there was a net outflow of over 9,000 people from Atlantic Canada to Alberta," said the APEC report. "The interviews with project proponents for this MPI revealed that major project developers and suppliers are facing a rapid escalation in labor costs, particularly in Newfoundland and Labrador. The scarcity of labor has resulted in average wage growth in Newfoundland and Labrador of 5.4 percent in 2012, double the national average and the fastest rate of growth across the country for the second straight year. Ongoing labor issues remain a major challenge to be addressed in order for Atlantic Canada to fully capitalize on its major project potential."

Nevertheless, on June 12 the Conference Board of Canada projected that Newfoundland and Labrador will lead the country in economic growth over the next two years.

The Conference Board projects that the province's economy will grow by an estimated six percent in 2013 [ahead of the national average of 1.8 percent], and by 3.4 percent in 2014.