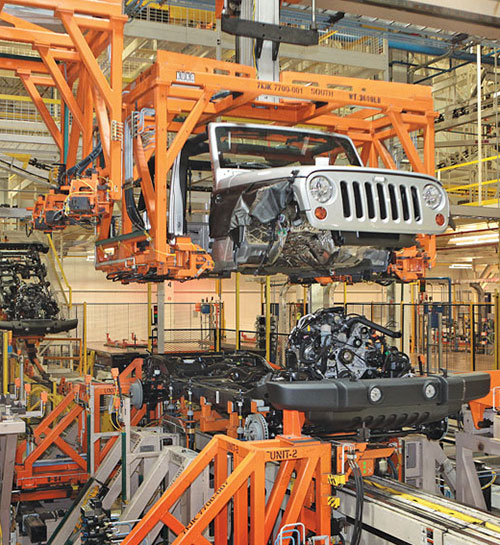 A powertrain assembly is married to a Jeep® Wrangler at Chrysler Group LLC's Toledo Assembly Complex, which in May celebrated its one-millionth Jeep Wrangler JK model. The complex's Toledo North section will add 1,105 new jobs on a second shift in the third quarter, bringing total complex employment to more than 3,000. In April Chrysler announced it would invest $19.6 million in its Toledo Machining Plant in Perrysburg, following a $72-million investment in 2011.
Photo courtesy of Chrysler Group

ozens of projects engaged with moving goods have recently made good moves to Greater Toledo.

The projects may be new, but the reasons behind them are the same reasons the area's founding fathers and companies created The Glass City in the first place: a complementary mix of transport modes, and a capable work force and promising customer base each within easy striking distance.

It's no wonder, then, that transportation and integrated logistics is the lead key industry targeted by the Regional Growth Partnership, enhancing the viability of projects in the other key industries of automotive, food processing and agribusiness, advanced energy, advanced manufacturing and bioscience.

In 2012 Greater Toledo saw the attraction or retention of 90 economic development projects, which will create 3,200 new jobs and feature $1.7 billion in capital investment.

Major projects in logistics have come from FedEx, Walgreen's, Kohl's, Best Buy, UPS, Menards, BX Solutions, Home Depot and Lowe's, among others in recent years. Some of them are coming back for more: FedEx Freight is siting a 188-door facility in Northwood, following FedEx Ground's 2009 launch of a $90-million hub in Perrysburg that's grown its payroll to 470.

David Westrick, spokesman for FedEx Ground, says factors such as a good work-force population always go into facility siting decisions, "but number one is always access to highways, and that is definitely the case there."

Home Depot already operates a facility in Allen Township, just north of Findlay along I-75, and is considering another major distribution center in Wood County's Troy Township, where the local zoning commission approved plans in May. The site is not far from CSX's new intermodal facility in North Baltimore, and has certifications as both a CSX Select Site and an Ohio Jobs Ready site.

A new routing of State Route 18 to the new CSX facility was a big help in providing a more direct route to I-75. What many see as a renewed state commitment to the business community meant that rerouting was done in a mere 18 months. There's also a new interchange at the site under consideration by Home Depot. And all signs are positive for a widening of I-75 to three lanes in the area between CSX's facility and I-475 in Toledo.

The Veterans' Glass City Skyway bridge along I-280 in Toledo opened in 2007.
Photo courtesy of Ohio DOT

Early June saw the launch of a new distribution center from cookware producer Calphalon Corp. in Wood County, part of the 20-county region represented by the Regional Growth Partnership, including three counties in southeastern Michigan.

"The site is approximately 12 miles from Calphalon's Perrysburg manufacturing facility and will improve efficiency and service as we ship products to customers around the country," says Connie Bryant, spokesperson for Calphalon parent Newell Rubbermaid. "Access to the Ohio Turnpike, Highway 582, State Route 75, and Highway 24 also make it a cost-effective shipping point, with easy access to all directions."

The route of U.S. Highway 24 is dubbed "Fort to Port" for its direct line between Fort Wayne, Ind., and the Port of Toledo. A decades-long effort to improve the highway was completed in 2012. Dean Monske, president and CEO of the Regional Growth Partnership, says the Highway 24 improvements have cut 35 minutes off the Fort-to-Port drive while making it safer at the same time. Moreover, the project has now afforded communities along the corridor the opportunity to showcase hundreds of acres of prime land served by robust infrastructure, he says. "They've been waiting for years to see it completed," Monske says. "I think you'll see a lot of places in Northwest Ohio benefiting." 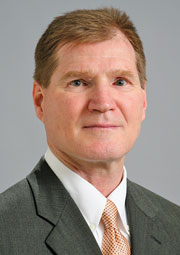 Waterville is one of those places. So is Defiance, where Consolidated Grain and Barge (CGB) this summer will start up a new $23-million grain storage and shipment terminal with the capability to load out 90-car unit trains.

Overall, four major railroads move freight through Northwest Ohio, making the region one of the top five U.S. rail hubs. Norfolk Southern is investing $160 million in a 275-job expansion at its freight classification site in Bellevue, 45 minutes southeast of Toledo. When completed in 2015, Bellevue will be the largest such yard on the NS system with 80 tracks.

Want another unfair advantage? The Toledo-Lucas County Port Authority just expanded its Free Trade Zone in January to encompass all of Sandusky, Henry, Wood, Lucas and Defiance Counties, while reorganizing under the Alternative Site Framework, which "takes a six- to nine-month process and shortens it to 30 to 45 days," says Paul Toth, president and CEO of the Port Authority.

Harlan Reichle is president and CEO of commercial real estate firm Reichle Klein Group and chairman of the board of the Regional Growth Partnership.

"We're consistently fielding inquiries that are logistics-based requirements," he says of his firm's work. However, he's frequently surprised by the lack of knowledge in the national industrial community about the dynamic activity in the area

One source of that knowledge is Rich Martinko, director of the University of Toledo Intermodal Transportation Institute.

"The unique thing about the Toledo area is you rarely find a location with a convergence of all the modes - rail, air, water and surface, and then pipelines," he says. Surface transportation improvements have included more than $500 million in recent work. 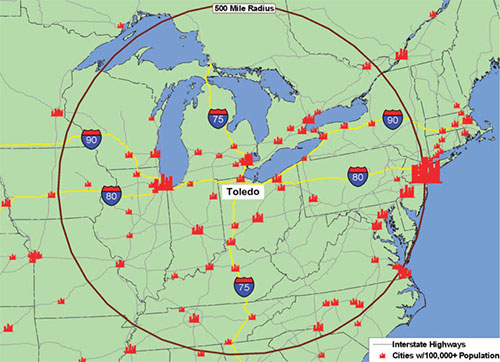 No Matter How You Slice It: An impressive number of significant cities sit within 500 miles of Toledo. There is more industrial square footage within 300 miles of Toledo than any other location in the U.S. and Canada. And some 9 million people live within 100 miles.

The result? The Texas Transportation Institute's annual list of most congested areas in the nation lists Toledo in the bottom 10 percent, as one of the least congested freight highway systems in the country.

"That's huge for the new Chrysler plant," he says of the company's growing Toledo Assembly Complex. "They want guaranteed scheduling, and that kind of mitigation of congestion is a big deal."

"We see Northwest Ohio as the Chicago of 50 years ago," observes Toth. "Great assets, just not the congestion that other places have."

This investment profile was prepared under the auspices of the Regional Growth Partnership. For more information, call 419-252-2700 or visit rgp.org.