The nation's first 'work ready' community has overcome more in the past two years than most communities will have to in a lifetime.

That in itself is impressive, given the growing number of communities in Missouri and other states that are working to earn the designation. But the county seat of Jasper County is Joplin, where a catastrophic EF-5 tornado struck on May 22, 2011, causing about $3 billion in damages and more than 150 deaths.

In 2012, Missouri was selected as one of the first four states to participate in the CWRC initiative by ACT. The initiative aligns work-force training programs with the economic development needs of communities; matches appropriate applicants to jobs based on skill level; and strengthens businesses by strengthening the work force. More than 80 local employers, educational institutions, and work-force development organizations supported Jasper County's efforts to achieve this important certification. 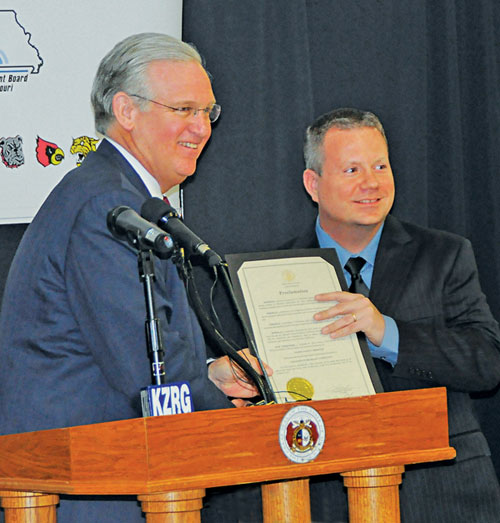 The significance of this designation cannot be overstated. It signals to potential capital investors that Jasper County is (1) helping workers understand what skills are required by employers, and how to prepare themselves for success; (2) helping businesses effectively communicate their work-force needs to area education and work-force training programs; (3) providing educators with the tools needed to close the skills gap by establishing career pathways for students with stackable industry-recognized credentials; and (4) equipping economic development organizations with an on-demand reporting tool to promote the quality of their work force.

"For Jasper County, home to the Joplin metro area, to become the very first ACT Certified Work Ready Community in the nation is another testament to this community's resilience and its commitment to rebuilding its economy stronger, and smarter, than ever before," said Gov. Jay Nixon at a March 8 event in Joplin announcing the CWRC designation. "Congratulations to Jasper County for being the first community in the country to achieve this certification, and for demonstrating that the workers here have the skills and training necessary to compete - and win - in the global economy."

Jasen Jones, executive director of Southwest Missouri's Workforce Investment Board, is a leading driver of the county's and region's participation in ACT's National Career Readiness Certificate program, which has been under way since 2006.

"The tornado put things on hold somewhat with respect to work we wanted to get involved in on the Certified Work Ready Community effort," he recalls. "We were about to launch NCRC at the high school level, and several school buildings were destroyed, so we needed to get some stability there, which was the case by the time school started again in August 2011."

"Through recovery grants our office secured, we made sure that the several hundred temporary workers here were equipped with NCRC as well. The disaster recovery grant we got from the Department of Labor was designed to put them to work and then get them permanently placed later on. So that helped those workers long term as well as short term.

"For the recovery effort citywide," adds Jones, "the Citizens Advisory Recovery Team included Work Ready Communities as one of their recovery goals, because they knew Joplin was getting a lot of national attention on the recovery side, but wanted to become one of the first in Missouri, if not in the country, to get in that national spotlight with the message that Joplin is open for business and its work force is stronger than ever. So work force had a main role in Joplin's recovery effort."

Joplin-based Able Manufacturing & Assembly LLC recruits in southwest Missouri and in neighboring Kansas and Oklahoma - 30 percent of the contract manufacturer's employees are from outside Missouri, says Susan Adams, director of human resources. The state labor agencies in all three states administer the NCRC test so that, regardless of where a candidate comes from, he or she has taken a standard skills assessment.

"We have a fairly small HR department, so the people who meet the qualifications for our jobs are vetted before they ever come here."
— Susan Adams, director of human resources, Able Manufacturing & Assembly LLC

"This way, I have a good, standardized baseline of their math, reading and locating information [skills], and we have recently added another, workplace observation, for some of our jobs," says Adams. "This is an indicator of how well a candidate will respond to on-the-job training, whether they are able to learn through observation."

Able Manufacturing & Assembly is unique, certainly fortunate, in that the three states in which it recruits use this work-force methodology, Adams notes. "We have a fairly small HR department, so the people who meet the qualifications for our jobs are vetted before they ever come here. My HR staff isn't having to go through stacks of applications. Candidates have already met the job requirements, and then with the NCRC we are able to verify their basic skills."

Monsanto will invest more than $400 million at its Chesterfield Village Research Center near St. Louis, creating 675 jobs over the next three years. The company will add a new research building, 36 greenhouses and 250 laboratories to facilitate development of its seed and trait pipeline.

Building materials maker CertainTeed announced in April that it will invest $100 million in a Landmark™ shingle manufacturing and distribution center in Jonesburg, on I-70 west of St. Louis. The project will create about 100 new jobs.

Yanfeng USA Automotive Trim Systems will build a new $45-million production facility in Riverside, near Kansas City, adding about 260 new jobs to the area's automotive sector. A subsidiary of Yanfeng Visteon, the company is a major supplier to General Motors, Chrysler and other OEMs.

Able Manufacturing is an ISO 9001 company, making it documentation intensive with procedural instructions to ensure that repeatability and standardization of processes is maintained.

"That all goes out the window if a person doesn't have adequate reading skills," says Adams. "They need to read a bill of materials and understand the complexities of each unit they're building." The company makes truck and crane cabs, train exteriors and interiors and a range of industrial equipment. It maintains a staff of about 325 at three facilities - two in Joplin and one in Pittsburg, Kan.

Adams credits the area's spirit of collaboration as the force behind Jasper County's Certified Work Ready Community designation - tornado or not. The business community, school administrators and work-force agencies all appreciate the 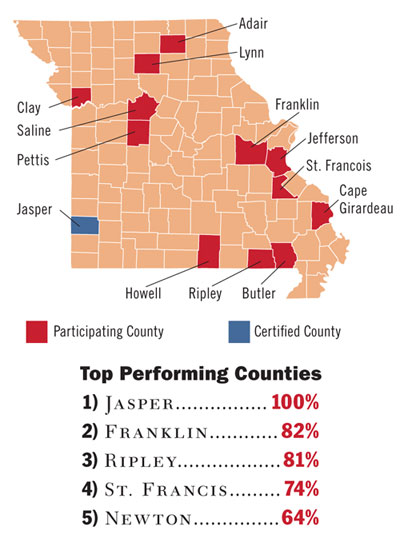 importance of a certified, qualified work force to the area's future prosperity - a point she says that was made abundantly clear the day Gov. Nixon came to town to recognize the community for its Work Ready Community status.

Meanwhile, she relates, "Joplin's new high school, currently under construction, will be a career path school where the students will elect a career path early on, and their elective classes will be tailored to that career path. The students will be focused on a career from the beginning of high school. Many of them will go on to higher education and will have taken the ACT. But those that go directly into the work force will have the NCRC, preparing them for the work force."

"It's a very collaborative community, which is why we have come through the ordeal of the tornado the way we have," she says. "Building these relationships has been a conscious effort of the community since well before that."