hile economists fret over bubbles of another kind, the leading maker of bubble drinks is stretching its wings. Lollicup USA Inc., the specialty beverage manufacturer, supplier and retailer, is moving from 140,000 sq. ft. (13,000 sq. m.) in two separate locations in Walnut and Industry, Calif., to one shiny new 300,300-sq.-ft. (27,898-sq.-m.) facility in the San Bernardino County community of Chino. The company plans to add to its payroll of 150 once the relocation is complete in mid-third quarter 2013.

"We are bringing manufacturing back to the US," said Alan Yu, president and CEO of Lollicup. "In addition to our corporate headquarters, our new space will house a state-of-the-art manufacturing facility for paper and plastic disposable goods. 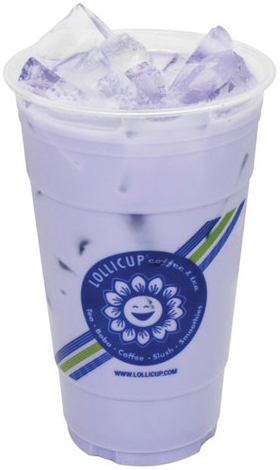 We are moving our manufacturing from Asia to California to shorten our customers' lead times and to meet increased demand for our products." Lollicup pre-leased the building, called the First Chino Logistics Center, in March from First Industrial Realty Trust.

Lollicup started the Boba Milk Tea movement with the opening of its first store in San Gabriel, Calif. Five more stores quickly followed, and today the company has stores in 11 states. The company plans to expand its stores overseas to Dubai and China next.

D Dannar LLC, a producer of alternatively powered heavy equipment for the governmental sector, announced in June it will create 288 new jobs and will invest as much as $4.65 million in real estate improvements, equipment, and technology over the next four years in Muncie, Ind. The average pay rate of the new jobs is projected to be $27.33 per hour. The company will initially occupy 25,000 sq. ft. (2,322-sq.-m.) in the Delaware County-owned Business Center facility. Additional space will be added as the company grows at the former Twoson Tool facility.

The plant will produce the Dannar Mobile PowerStation®, the first vehicle of its kind to combine battery electric power with a hydraulic drive-train, designed to perform maintenance and provide supplemental off-grid power. Hiring projections call for 20 employees in the first year, growing to 479 in year five. "Muncie has the right people to produce the Mobile PowerStation with quality and pride," said Gary Dannar, CEO and Founder of DD Dannar LLC.

Motos and Macintoshes Rev Up in Texas

t The Wall Street Journal's AllThingsD conference in late May, Dennis Woodside, CEO of Google's Motorola Mobility, announced that every single new Moto X smartphone sold in the US would be assembled at a former Nokia facility in Fort Worth, Texas, that will employ up to 2,000 people. 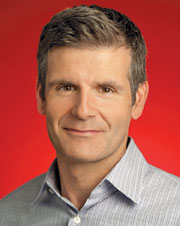 "There were a few reasons why we decided to do this," said the company, beginning with proximity to engineers and designers at the company's Silicon Valley location and at its headquarters in the Chicago suburb of Libertyville. "We'll be able to iterate on design much faster, create a leaner supply chain, respond much more quickly to purchasing trends and demands, and deliver devices to people here much more quickly. The Fort Worth site will also benefit from proximity to a non-US location that went unmentioned: the company's service and repair operation in Monterrey, Mexico (pictured).

The new 481,000-sq.-ft. (44,685-sq.-m.) site, closed by Nokia in 2007, is located in a foreign trade zone at Alliance Texas. It will be operated by Motorola's Singapore-based manufacturing partner Flextronics, which also assembles smartphones for Motorola in Brazil and China.

Taiwanese electronics firm Q-Edge in March 2009 announced it would create 500 jobs at the Nokia site. Reporting in April by the Fort Worth Star Telegram found that Hillwood Properties, owner and developer of Alliance Texas, was investing $3.3 million in renovations at the property so that Flextronics could move in. The paper received no response from Q-Edge or its parent company Hon Hai/Foxconn about whether Q-Edge was still a tenant, and found that the company had never followed through on an approved local tax abatement related to the project.

A week earlier in May, Apple followed up its recent location of a campus in Austin by announcing it would begin to assemble some Mac computers at a $100-million plant somewhere in Texas. Apple also works with Hon Hai/Foxconn, whose working conditions at its Chinese plants came under heavy criticism in recent years. 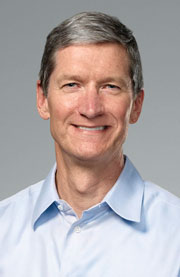 In late May congressional testimony defending the company's tax planning practices, Apple CEO Tim Cook said, "while the overall size of the domestic work force has stagnated during the last ten years, Apple has increased its US work force more than five-fold, from fewer than 10,000 in 2002 to approximately 50,000 today."

He then detailed its investments in that time frame: 250 retail stores; substantial domestic R&D; the new Apple Campus 2 in Cupertino, Calif.; a $100-million, 1-million-sq.-ft. (92,900-sq.-m.) campus in Austin; two new data centers under construction in Oregon and Nevada and the forthcoming Mac manufacturing.

"Apple's investments over the past decade have resulted in the creation of entirely new products, product categories and industries," he said with typical non-PC bravado. "The company estimates that it has created or supported approximately 600,000 jobs for American workers."

The company also estimates another 290,000 jobs related to the "App economy" created by its App Store, which marked its 50-billionth download on May 16.

The Future's Made in Marysville

he location of this facility is in the midst of one of the greatest collections of engineering and production talent in the world," said Hidenobu Iwata, president & CEO of Honda of America in May. Iwata was talking about central Ohio, where the company has continued to build its own cluster over the past 30 years. 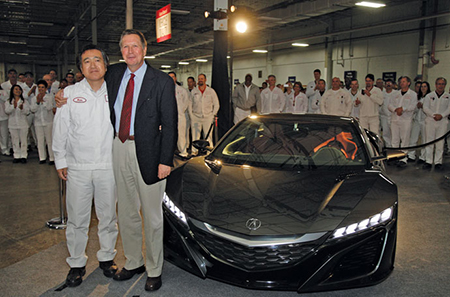 The all-new Acura NSX supercar will be produced at a new Performance Manufacturing Center in Marysville, Ohio. Ohio Governor John Kasich (r.) joined Hidenobu Iwata, president & CEO of Honda of America and the head of Honda's manufacturing operations in North America, next to the Acura NSX Concept on display at the May event announcing the project.

That cluster will now see a $70-million expansion in the form of a new 184,000-sq.-ft. Performance Manufacturing Center to produce the Acura NSX supercar. The facility will be housed inside Honda's former North American Logistics facility in Marysville. Honda's third auto plant in Ohio, it will be only a few miles from the Honda R&D Americas, Inc. Ohio Center that is engineering the supercar for production and adjacent to Honda of America Mfg.'s Marysville Auto Plant. The Performance Manufacturing Center also is close to Honda Engineering North America, Inc., center for the development of new production technologies.

Associates at Honda's engine plant in Anna, Ohio, will assemble the NSX powertrain. The new plant's approximately 100 manufacturing associates will be drawn from within Honda's existing operations in Ohio. The new NSX is being developed by a global R&D team led by designers and engineers at Honda R&D Americas, Inc. located in Los Angeles, Calif., and Raymond, Ohio. Honda R&D Americas chief engineer Ted Klaus is leading the global team developing the new NSX, and Clement D' Souza, associate chief engineer at Honda of America, is leading the team that will bring NSX to mass production in 2015.

"This new plant will be as unique as the vehicle we will build here," said D'Souza. "In creating the plan for this plant, we looked closely at each process and determined the perfect blend of associate craftsmanship and technology to adopt a new approach to manufacturing."

The next-generation NSX will be built exclusively at the all-new Performance Manufacturing Center. In addition to being sold in North America, the NSX will be exported to customers throughout the world.

Also in May, the company announced a $470-million investment in a new transmission plant in Celaya, Mexico, that will employ 1,500. Like the NSX, the plant is expected to reach production status in 2015.

The original Acura NSX was built at the Takanezawa Plant in Japan from 1990 until production moved to the Suzuka Plant in early 2004, where it was produced until 2005. Part of the Tochigi Factory, the Takanezawa Plant was the first manufacturing facility in the world to mass-produce an all-aluminum body and balance advanced production equipment with hands-on "craftsman" processes.

Ron Lietzke, spokesman for Honda North America, Ohio, says the new supercar "will be unique in terms of what materials go into it." He calls the company's level of activity in Ohio "amazing — not just the volume of activity, but the capabilities here." 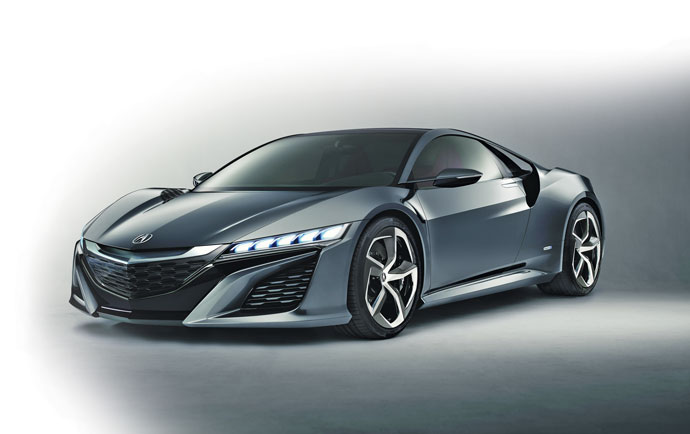 Steel and Aluminum, Living Together

ne of Honda's award-winning OEM suppliers for 2012 is expanding in Kentucky, and its sister company is celebrating a major JV project in northwest Ohio.

On May 15, Kobe Aluminum Automotive Products, LLC (KAAP), broke ground to expand its manufacturing facility in Bowling Green, Ky., and increase production of aluminum forgings for automotive suspension systems. KAAP will invest $66 million to build an 87,000-sq.-ft. (8,082-sq.-m.) addition to its existing facility and is adding 100 more employees. The new production lines are anticipated to start up in spring 2014.

"Kobe Steel had many options when we decided to establish this business in Bowling Green," said Susumu "Sam" Koike, president of KAAP. "We have had great experiences working in Kentucky, and we have never regretted our decision. The state of Kentucky made the decision for additional investment easy by offering financial incentives."

"The investment in this Continuous Annealing Line represents more than just the future of this facility - it also represents the future for automotive steel products and the applications in which they are used."
— John Surma, Chairman and CEO, U.S. Steel

Support also came from TVA, Warren Rural Electric Cooperative Corporation and Bowling Green Area Chamber of Commerce. KAAP plans to expand to a minimum of 320 jobs to its payroll of 220 by mid-2016 as a result of the expansion.

KAAP, a joint venture of Kobe Steel Ltd., Mitsui & Co Ltd. and Toyota Tsusho Corporation, has been operating in south-central Kentucky since 2005. There are 11 Kobe Steel subsidiaries in the United States, but the Bowling Green location is Kobe Steel's only U.S. facility to forge for the automotive industry.

One that anneals is celebrating its own growth in Leipsic, Ohio, where Kobe and United States Steel Corp. leaders on May 13 formally commissioned the new Continuous Annealing Line at their joint venture PRO-TEC Coating Co. PRO-TEC will now process some of the strongest and most formable grades of steel in North America. The new grades will assist automotive manufacturers in reaching the 2025 Corporate Average Fuel Economy (CAFE) standards of 54.5 miles per gallon for their passenger vehicle fleets.

"The investment in this Continuous Annealing Line represents more than just the future of this facility — it also represents the future for automotive steel products and the applications in which they are used," said U.S. Steel Chairman and CEO John Surma.

PRO-TEC said the use of high-strength steels has doubled in number in the past decade, and as a result they are "the fastest growing materials in the car." The commissioning event is a culmination of a $400-million capital investment by the partners into PRO-TEC. Announced in late 2010, the investment created 500 temporary construction jobs as well as 80 full-time jobs.

Internationally, Kobe Steel is consolidating work and closing one of its main steel works in Japan, and in April announced the completion of a $47-million second-phase expansion of its KAAP (China) Co., Ltd. JV in Suzhou, Jiangsu Province, China.