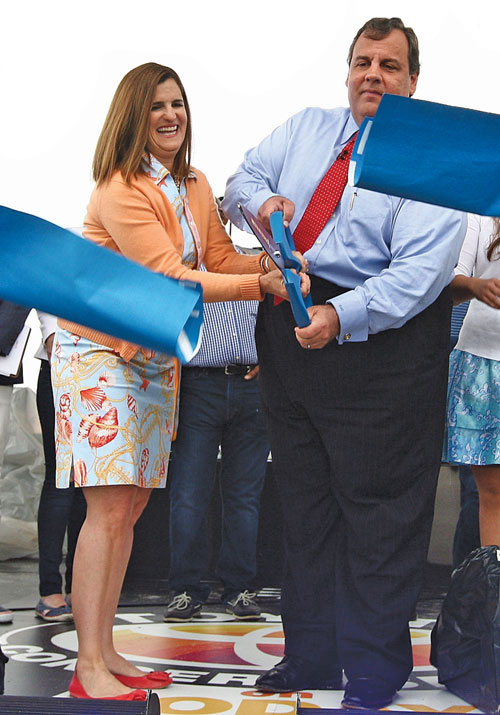 hen Gov. Chris Christie and his family cut the world's longest ribbon for the grand reopening of the Jersey Shore on May 24 in Seaside Heights, the event signaled more than the return of tourism to New Jersey's once-devastated coastline.

It marked the culmination of a series of initiatives designed to make the Garden State flourish once again with the humming sounds of industry.

Following the May 7 announcement that Hertz would relocate its headquarters from Park Ridge in Bergen County, N.J., to the Fort Myers area of Southwest Florida, New Jersey needed some positive news - and that's exactly what it got.

"This is an incredible day for New Jersey," the governor said as he, his wife Mary Pat and daughter Sarah cut a 5.5-mile-long ribbon to proclaim that the Jersey Shore was reopen for business after superstorm Sandy. "Mary Pat and I were here about seven months ago and saw the destruction of the boardwalk. You knew that if we all worked hard and worked together, we would get this done."

By the time Sandy dissipated last Oct. 31, it had killed 285 people and caused $68 billion in damages - making the hurricane the second-costliest in U.S. history. Only Hurricane Katrina, which practically wiped out New Orleans in 2005, caused more financial loss.

The record-breaking ribbon-cutting occurred just three and a half weeks after Christie and U.S. Housing and Urban Development Secretary announced HUD's approval of a $1.83-billion plan to aid New Jersey's disaster recovery efforts.

These funds will be spent in addition to a special allocation of federal tax-exempt bonds that will aid states, municipalities and private businesses with the costs of repairing and rebuilding the Eastern Seaboard from storm damage.

Much of this aid will go toward repairing critical infrastructure such as docks and wharfs, commuter facilities, electric and gas energy production plants, and water, sewage and solid-waste treatment facilities.

"This is an incredible day for New Jersey."
— Gov. Chris Christie as he cut the ribbon to reopen the Jersey Shore just in time for the summer tourist season

"The administration will be able to deploy this funding quite quickly," she says. "It will provide Grow New Jersey Grant Program funding to any business impacted by the storm. They can apply for a grant up to $50,000. We will help companies rebuild. We are also allocating $25 million to market the Jersey Shore as being reopened for business. It is called ‘Get Your Happy Back' and it will encourage travelers to come back to the Jersey Shore and support the local companies that are operating once again." 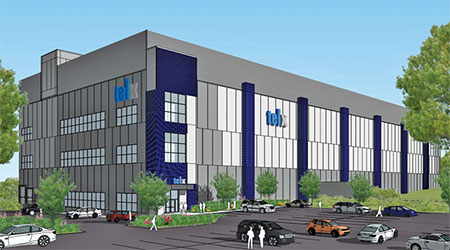 Telx opened its new $200-million data center in Clifton, N.J., in Essex County on June 19. The co-location facility is the third major investment that Telx has made into its campus in northern New Jersey about 17 miles from Manhattan.
Image courtesy of Telx

John Boyd, site selection consultant and principal of The Boyd Company Inc. in Princeton, N.J., says the ongoing recovery effort "will be a meaningful boost in construction jobs. The tourism industry is huge in New Jersey. Beach replenishment is essential and fundamental to the Jersey Shore. Getting federal funds for ongoing help is necessary. Beaches need to be replenished just like highways need to be repaved."

Boyd notes that Gov. Christie is doing other things to help businesses grow in the state. "New Jersey's Urban Transit Incentive has been successfully utilized in the past, most notably for retaining Panasonic's North American headquarters in Newark and more recently keeping the headquarters of Church & Dwight here in the Princeton area," says Boyd.

"There are other projects out there, including ones like the federal government's new Drone Testing Project being courted by states across the country," he adds. "New Jersey is making a strong case leveraging the presence of a major FAA research center near Atlanta City, open airspace over the Atlantic Ocean and pinelands of southern New Jersey, and aviation studies and a new research park at nearby Stockton College."

"Data center operations are indeed a growth industry in New Jersey, principally in those northern counties in proximity to New York City and the region's huge financial community," Boyd says. "The fact of the matter is that the huge demand for data center services by the region's financial community is trumping those very real site selection drawbacks associated with New Jersey like high power costs, high land costs and exposure to superstorm Sandy-like weather disruptions."

The consultant adds that "in the case of New Jersey, market forces carry the day, especially for third-party data center providers tapping this vast and highly concentrated New York/North Jersey metro area market. As we tell our clients, there is no perfect location. It is all about trade-offs."

These days, more than a few data center operators are making the decision to choose New Jersey. According to a recent report by CB Richard Ellis, more than 4 million sq. ft. (371,600 sq. m.) of new data center space in 24 buildings has been developed in New Jersey since 2005, and that building trend continues.

"There has been a surge of activity in the data center field here," says Choose New Jersey's McDaniel. "One reason is our reliable power. Jersey server farms stayed on line during Sandy while Manhattan data centers went dark. PSE&G was just named the Best Utility in America. The state is doing its part to support data center operators, and our utility is making huge investments."

Those investments paid off last year when Telx announced it would spend $200 million to create a third data center facility at its Clifton, N.J., campus. On June 19, Telx opened the doors to its newest co-location complex, which will also be used as a future-technology incubator.

Michael Terlizzi, executive vice president of engineering and construction for Telx, says his company selected the northern New Jersey location in order to be near the firm's New York facilities.

"It comes down to proximity to network and the availability of power and scalability of power," Terlizzi says. "We selected Clifton for redundancy and reliability of electric utility and the cost of power. And it is just far enough from our main installation to ensure business continuity in a disaster recovery situation."

The Clifton campus of Telx is located in Essex County, N.J., about 17 miles (27 km.) from Manhattan.

"Certain aspects of the original building on this site made it attractive to us," Terlizzi adds. "Its structural qualities and ceiling height were good. We had signed our first lease here back in 2008 to serve as an annex to two major connection facilities in Manhattan - two of the largest interconnection facilities in the world."

Telx opened 20,000 sq. ft. (1,858 sq. m.) of white space in 2009, "and then we did that again in 2010 and then again in 2011," says Terlizzi. "We engaged our landlord to look at property on campus. Our landlord purchased the property and we built a brand new facility from the ground up. This is now New Jersey's premier data center campus."

Telx benefitted from an incentive that saved the company on the cost of construction.

"It was a tax relief of 3 percent that we saved on all construction-related activity on this property," says Terlizzi. "Initially, we will have 20 dedicated employees just for this facility, but that number will grow. We are bringing online 15,000 sq. ft. [1,393 sq. m.] of data center space initially. As we add more customers, we will add more employees."

Terlizzi say Telx has clients that rent anywhere from 10,000 sq. ft. of data center space to 100,000 sq. ft. (929 to 9,290 sq. m.). "Within five years, we should fill up this new space," he says. "A lot of data centers are built by wholesale providers. We operate a retail model. We work with small and medium-sized businesses as well as larger ones."

He adds that "New Jersey is growing in this sector. Our contractors are very busy. We are heavily engaged with our network providers. Their construction is at an all-time high."

Other large data center operators that are expanding in New Jersey include CommVault, Equinix and Savvis. CommVault is a data storage company that recently announced plans to build a 650,000-sq.-ft. (60,385-sq.-m.) R&D complex that creates 1,500 new jobs in Oceanport.

Lt. Gov. Kim Guadagno says the state has adopted a number of measures to make corporate facility expansion projects more easily attainable in New Jersey. She noted recently that the state passed $2.35 billion in tax cuts and reforms to benefit private-sector employers that are seeking to grow in the Garden State, while also passing a 2-percent property tax increase cap.

Since April, the state has welcomed the following expansions:

McDaniel says that the Christie-Guadagno administration will remain aggressive in its approach to economic development. She notes that the state has offered incentives to pharmaceutical companies even as they were downsizing. 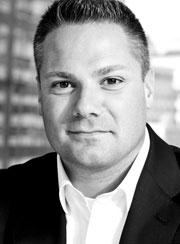 "We selected Clifton for redundancy and reliability of electric utility and the cost of power."
— Michael Terlizzi, executive vice president of engineering and construction for Telx

"We offered an incentive to hire and train former pharmaceutical workers," McDaniel says. "We will reimburse 50 to 90 percent of their salary up to $14,000 in the first year. Plus, our Angel Investor Tax Credit Program started in June. It provides up to 10 percent of a qualified investment tax credit for firms conducting research or related activities in biotech, advanced materials, IT, medical device technology or renewable energy."

McDaniel says these investments are paying off. "Since 2010, we have increased our employment in the private sector by more than 130,000 jobs," she says. New Jersey's unemployment rate reached a four-year low of 8.7 percent in April.

Boyd applauds these measures and says the state must "continue to fight the good fight of reducing taxes - especially crippling property taxes - and make smart infrastructure investments like those associated with Port Newark/Port Elizabeth trade and the growth of the logistics industry in the state."

The consultant also notes that "Christie cannot make New Jersey more business-friendly by himself. He needs the help of the state legislature. Today, our clients, especially in Blue States like New Jersey, are heavily engaged in local legislative races looking for reformers to hold the line on out-of-control state spending, pensions and taxes."

Boyd cites the huge Amazon distribution center in Robbinsville as a case in point. The $200-million capital investment that creates 700 new full-time jobs came about after the global online retailer negotiated a two-year sales tax holiday with the state.

"The New Jersey business community is especially energized with the return of former banker and state Sen. Pete Inverso in the 14th District," says Boyd. "This is where Amazon just announced its first New Jersey fulfillment center. Inverso is an ally to Christie and his tax and spending reforms."

If the governor can successfully recruit more such allies to serve in the legislature, real reform can be expedited, notes Boyd.

"Again, Gov. Christie cannot turn around the Queen Mary alone," says Boyd. "Like other business climate reformers like John Kasich in Ohio, Mitch Daniels in Indiana and Rick Scott in Florida, close cooperation between the governor's office and the legislature is essential for success."