An Australian company joins Oklahoma's aerospace cluster as the state
prepares for a coming boom in the unmanned aerial systems sector.

overnor Mary Fallin returned from Le Bourget Paris Airshow in June with a commitment from Australian aerospace supplier Ferra Engineering to locate an operation in Grove, in the northeast corner of the Sooner State. The company, which plans to hire 20 engineers, specializes in the custom design, manufacture, assembly and test of aerospace structures and sub-systems. It also produces medical devices for the healthcare industry, as well as components for renewable energy systems.

Ferra Engineering joins a vibrant aerospace sector in the state - the Oklahoma Aerospace & Defense Alliance has more than 300 member companies, mostly clustered in the Tulsa and Oklahoma City metros.

"Ferra chose to expand to Oklahoma because its central location enables us to easily provide service to our customer base on both coasts and international markets," said Mark Sherrer, CEO, at the June 18th announcement with Gov. Fallin in Paris. "Oklahoma's competitive cost structure, business friendly environment and strong existing aerospace supply chain made it a natural choice."

The Other Aerospace Industry

Oklahoma's aerospace industry will have as much to do with unmanned aerial systems (UAS) as with piloted aircraft, according to analysis unveiled in January by Gov. Fallin, Secretary of Science and Technology Stephen McKeever and Michael Toscano, president & CEO of the Association for Unmanned Vehicle Systems International (AUVSI). The analysis says Oklahoma is poised to create nearly 600 new jobs in the first three years following the integration of Unmanned Aerial Systems (UAS) into U.S. airspace. Meanwhile, beyond the first three years, Oklahoma stands to capture hundreds, and perhaps thousands, of additional new jobs by 2025.

The data come from a forthcoming AUVSI-commissioned study examining the national and state-by-state economic impact and job creation potential resulting from the UAS integration into national airspace, which is expected to occur by 2015. 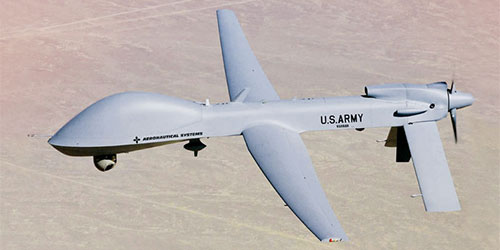 Unmanned aerial systems, like the military drone shown here, are a critical part of Oklahoma's aerospace industry in the future, bringing the potential of thousands of high-wage jobs to the state.

"UAS represents one of the fastest-growing segments of the aerospace industry, which already is an important part of the Oklahoma economy," Fallin said. "We are taking the steps necessary to create an environment conducive to job creation and investment that also positions Oklahoma as a national leader in the advancement of UAS technology. We're excited the data from AUVSI's economic impact report show Oklahoma is poised to add hundreds of jobs and see millions of dollars in economic impact as UAS is integrated into the national airspace."

Fallin created the Unmanned Aerial Systems (UAS) Council in 2011, which has since produced a strategic roadmap to help make Oklahoma the "go-to" place for UAS research, development and testing. 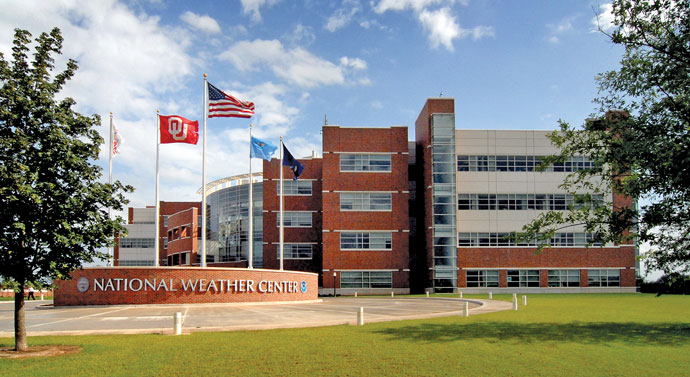 The National Weather Service complex at the University of Oklahoma in Norman is an economic driver for the state and a paradigm of how academia and the public and private sectors can collaborate successfully.

"Oklahoma is positioning itself to be a hub for innovation and growth in the UAS field by building strong academic R&D programs at our state universities and by establishing leading Test and Evaluation facilities and infrastructures through public-private partnerships. New technologies, capabilities and an educated and experienced work force are the result," said Dr. Stephen McKeever, Oklahoma Secretary of Science and Technology. 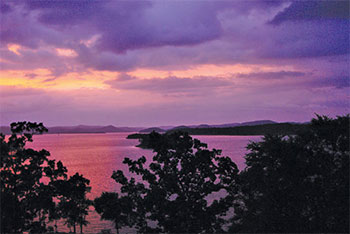 Sunrise at Broken Bow Lake in the Ouachita National Forest in McCurtain County, in southeast Oklahoma.

"Under Governor Fallin's leadership, Oklahoma is well-positioned to reap the economic benefits that will come along with the expanded use of UAS technology," said Michael Toscano. "Oklahoma has the infrastructure in place to support the development of UAS technology, as well as several industries - such as agriculture and the oil and gas industry - that could one day benefit from the technology. Moving UAS technology forward can improve our quality of life while creating high-quality American jobs, especially right here in Oklahoma."

Oklahoma's aerospace industry and infrastructure, including restricted airspace, companies already developing UAS technology and research institutions, strongly position the state to capture additional jobs beyond 2017. Also, Oklahoma's top industries - including agriculture and oil and gas - are expected to be among the biggest end users of UAS technology. As these industries adopt and deploy UAS in the state, more new jobs could follow.

Across the country, the agriculture sector is expected to be the largest market for UAS technology, the AUVSI study finds. UAS will allow farmers to more efficiently monitor crops and distribute pesticides, which could help improve efficiency among the state's 86,000 farms and maintain the state's position as a national leader in wheat production.

ENID: Koch Nitrogen Co. LLC is investing $1 billion in a new fertilizer production facility that will be operational in 2016. The project will generate hundreds of construction jobs and 30 permanent positions.

TULSA: Verizon is adding 500 new jobs to its North Lakewood facility where it already employs about 900. The company cited Oklahoma's strong supply of financial services talent as a key reason for expanding in the state.

The oil and gas industry is another industry that sees tremendous potential for using UAS technology. Many major oil companies have expressed interest in using UAS to more efficiently survey pipelines, drilling rigs and other critical infrastructure.

Oklahoma has been a national leader in UAS advancement. Last year, the Department of Homeland Security selected Fort Sill to test small UAS for public safety purposes such as search and rescue and disaster response.

"The fact that companies from around the country have come to Oklahoma to test their technologies shows the potential return on Oklahoma's investment in UAS infrastructure," said Toscano.

The economic data represent the preliminary findings of the AUVSI economic impact study, which will be finalized in the coming weeks. The report was commissioned by AUVSI and developed by Darryl Jenkins, a past professor at George Washington University and Embry Riddle Aeronautical University, and an aviation industry economist with more than 30 years of experience. Mr. Jenkins is the author of the Handbook of Airline Economics and previously served as the director of the Aviation Institute at George Washington University in Washington, D.C.

Oklahoma's business climate took two steps forward in May with two measures signed into law - one reducing income tax rates and the other reforming the state's workers' comp system.

On May 13th, Governor Mary Fallin signed into law House Bill 2032 that cuts the top income tax rate from 5.25 percent to 5.0 percent on January 1, 2015. It would cut the rate further, to 4.85 percent, in 2016. Once fully realized, the tax cut would pump $237 million into the private sector. Fallin said the income tax cut was an important tool for job creation and economic development.

"One of the first questions I get when I am talking to business owners throughout the country is, 'If I come to Oklahoma, are you going to raise my taxes?' " Fallin said. "Passing a significant and responsible tax cut will help us to recruit these businesses and retain the ones we already have. Our tax cut will ultimately lead to more job opportunities for all Oklahomans."

"Oklahomans have already seen their paychecks decrease, beginning in January of this year, thanks to Washington's tax hikes," she said. "Cutting our state income tax will help to offset that loss, and help working Oklahomans keep more of their hard-earned money."

The second cut, bringing the rate to 4.85 percent in 2016, is contingent on total revenue growth in FY 2016 being equal to or greater than the fiscal impact of a 0.15 percent tax cut. Fallin said including that language in the bill ensures that Oklahoma does not lose the revenue it needs to fund key government services.

"We want to cut taxes responsibly," Fallin said. "No one wants to starve state government of the resources it needs to fund priorities like education. The language of this tax cut bill was crafted in a way to ensure that we have enough growth revenue to pursue a significant tax cut."

The bill also provides for a total of $120 million to fund repairs to the Oklahoma State Capitol beginning this year.

On May 6th, the governor signed into law Senate Bill 1062, which reforms the workers' compensation system in Oklahoma. The bill, by Senate President Pro Tem Brian Bingman and House Speaker T.W. Shannon, seeks to reduce costs for businesses. It moves the state from a court-based workers' compensation system to an administrative system, allowing for more timely processing of claims and reducing the adversarial nature of the process for both workers and employers.

"For decades, Oklahoma has had one of the most expensive and inefficient workers' compensation systems in the country, a constant obstacle for business owners looking to expand operations or create more jobs," Fallin said. "Senate Bill 1062 completely overhauls our flawed workers' comp system, dramatically reducing the costs to businesses and freeing up private-sector resources that can be invested in jobs rather than lawsuits. Additionally, our reforms ensure injured workers are treated fairly and given the medical care needed to return to work. This is an important pro-growth policy that will help us attract jobs and build a stronger and more prosperous Oklahoma."

Bingman, R-Sapulpa, said, "Oklahoma's runaway workers' compensation court has been the number one roadblock to job growth for decades, and today, we're finally putting the brakes on these costs. Replacing our broken workers' compensation system is historic. The Administrative Workers' Compensation Act sends a clear signal to job creators that Oklahoma is truly open for business. This bill is especially needed to help us control the year-to-year fluctuation of costs, and to help us compete for good manufacturing jobs while making sure injured workers are treated fairly."