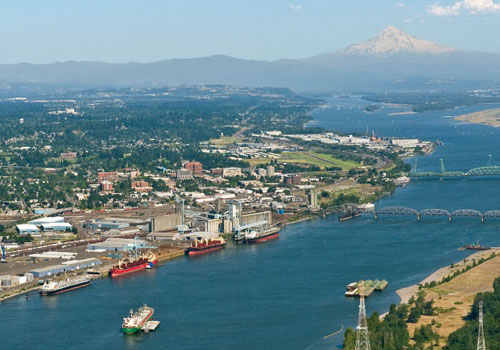 Longtime port tenant Tesoro in April announced plans to construct and operate a crude oil handling facility at the Port of Vancouver USA, located in the State of Washington near Portland, Ore. In a joint venture with the logistics company Savage, Tesoro is proposing to bring North American crude oil to the port by rail where it would then be transferred to marine vessels for transport to refineries in such places as California, Washington and Alaska. Port and other officials are reviewing the proposal.

ecretary of the Interior Sally Jewell signed a Declaration of Cooperation with Oregon and Washington on May 24th to expedite the review and permitting of energy generation, power transmission and other vital infrastructure development in the Pacific Northwest.

"By cutting red tape, expanding information technology tools and conducting concurrent state and federal reviews, we can trim months, if not years, off the time it takes to review and approve projects," said Secretary Jewell. "We will continue to ensure that vital infrastructure is designed, built and maintained in a way that protects public health, safety and the environment, while creating jobs and expediting economic growth."

According to a Department of the Interior press release, the agreement formally establishes a pilot Pacific Northwest Regional Infrastructure Team to more efficiently coordinate the permitting processes for infrastructure projects - where both state and federal agencies have review responsibilities. This state-federal team will use a cross-agency and cross-jurisdictional strategy to identify siting conflicts and mitigation early in the development and permitting process.

The infrastructure team will focus on a variety of projects, including renewable energy generation, electricity transmission, broadband, pipelines, ports and waterways and water resource development that are proposed in the states. The team will also be a forum for innovation in early identification of effective mitigation integrated across agencies as an important element of a successful integrated permitting strategy.

The formation of the pilot Pacific Northwest Regional Infrastructure Team builds on a successful partnership model with California, where the Interior Department and the state identified joint policy priorities for renewable energy, established a joint forum to resolve permitting and siting conflicts, and achieved significant project development, while protecting critical wildlife and cultural resources.

"With this new initiative, we can accelerate development of important energy and infrastructure projects that will create jobs and economic growth in our region."
— Washington Governor Jay Inslee

"With today's announcement federal and state agencies will work more collaboratively, reducing the time required to make significant permitting decisions while also improving environmental and community outcomes," said Gov. Kitzhaber May 24th. "This agreement embodies the kind of change necessary to accelerate our economic recovery, and restore the shared prosperity of our states."

In Washington, Governor Jay Inslee is working to modernize state regulatory systems to create and sustain a thriving economic climate that spurs job growth. State agencies in Washington are examining how they can remove barriers and support economic development efforts, including the reform of regulatory and permitting processes.

Historically, affordable electricity has helped industries across the state, and Gov. Inslee's plan is to ensure the State remains at the forefront of clean energy innovation and development. State agencies are also addressing infrastructure improvements to provide long-term economic growth because businesses need to move products efficiently and reliably across highways, railways and ports.

"The Pacific Northwest Regional Infrastructure Team represents an exciting opportunity for our state to engage with federal and regional partners to streamline and expedite regulatory processes," said Gov. Inslee. "With this new initiative, we can accelerate development of important energy and infrastructure projects that will create jobs and economic growth in our region. I'd like to commend President Obama and Secretary Jewell for their vision of collaboration on infrastructure development, in the Pacific Northwest and around the country."