ong America's biggest trading partner, Asia has emerged as the world's biggest market, with China overtaking the US as the world's top trading nation in 2012. Combine that with the recently signed Free Trade Agreement with South Korea and the agreements currently being discussed with Trans-Pacific Partnership, and it's easy to see how US Pacific ports, enterprise zones and forward-thinking regions will reap the benefits of this new economic reality.

America's Pacific Ports are also moving aggressively in preparation for the completion of the Panama Canal expansion, which will see a dramatic increase in deep-water container ships previously unable to navigate the Canal. Once the Panama Canal expansion is complete the Canal will accommodate container vessels 160 percent larger than ships allowed through today, forever altering global trade routes. This larger generation of container ships and supertankers are known as "Post-Panamax." Currently only four US ports are capable of supporting post-Panamax ships, and all of them are on the West Coast (Los Angeles, Long Beach, Oakland and Seattle.)

A port is considered post-Panamax ready once it meets three key criteria: 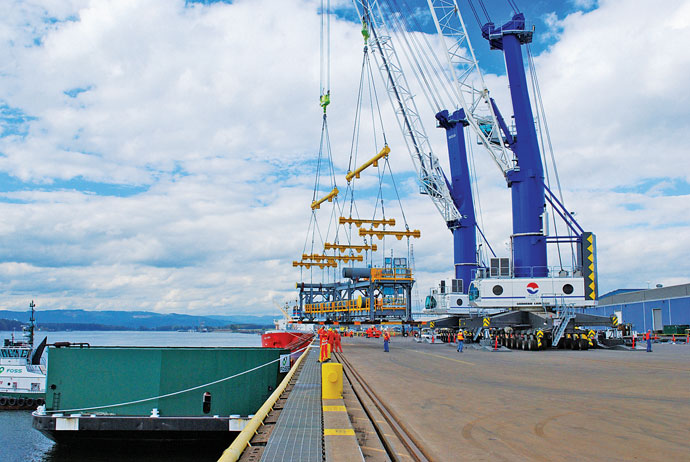 Two Liebherr cranes do their heavy lifting at the Port of Vancouver in southwest Washington.

There are a myriad of first-class ports and free trade zones along America's Pacific coast. Two of these - the Port of Los Angeles and the Port of Long Beach - are the busiest ports in the US, and many more are undergoing substantial infrastructure improvements, positioning themselves for a new era in global trade.

Enterprise zones and foreign trade zones, with favorable tax incentives and continent-wide access through well-developed logistics infrastructure, continue to be a favorite destination for corporate investment.

On the following pages we highlight some of the ports, trade zones, economic development zones and regions primed to take full advantage of all the new potential investment.

know what you're thinking … but believe it or not, doing business in California has incentives, you just have to find the right location in the San Bernardino Valley Enterprise Zone (SBVEZ), Southern California's transportation crossroads.

For more than 25 years, enterprise zones have been California's cost advantage to building and growing a footprint on the West Coast. The SBVEZ has become the location of choice for manufacturing, distribution and e-commerce businesses such as Amazon, Kohl's, Simpson Strong-Tie and Hewlett Packard.

Enterprise zones offer tax credits that lower operational costs long term, and add more return on investment for workforce and capital investments than any other economic development program available in the state.

Mitigating one of the high costs of doing business in California - taxation - enterprise zones help businesses reduce their annual state income tax with a portion of the hiring wages paid to local workers, the sales tax paid on equipment purchases, and accelerated depreciation on various business property - giving business owners long-term flexibility to dedicate resources where they need it most.

Located 60 miles east of the ports of Long Beach and Los Angeles, the SBVEZ's centralized location and advanced supply chain allows businesses to move product by air, rail and truck to anywhere in the U.S. With its sophisticated rail network and intermodal container facility, an international airport, and direct access to six key distribution highways, the SBVEZ has the capacity to grow with business.

As an emerging business hub, the SBVEZ offers modern, more affordable commercial product than older populated markets in California. Currently, more than 1.7 million sq. ft. of commercial space is available, and another 1 million sq. ft. is under construction. This means lower rents, modern facilities and open parcels to expand business.

Enterprise zones are the best strategy to starting a business in California. Nowhere else can businesses get the best of California at the most competitive cost. 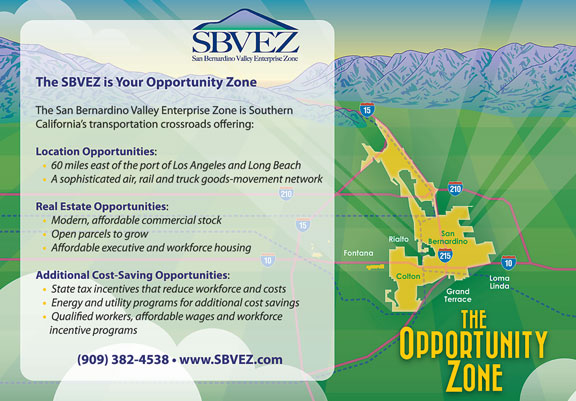 ust 30 minutes north of Portland, Oregon, Kalama is one of the jewels of the Pacific Northwest with prime industrial land and state-of-the-art industrial buildings. A convenient location for companies searching for the perfect spot to grow, Port of Kalama is bordered by the deep draft Columbia River, mainline rail, and Interstate 5.

Kalama is attracting business attention for good reason. While its regional neighbors are challenged with a shortage of readily available industrial land, Kalama boasts 70 acres of prime industrial land and the new Kalama River Industrial Park. Kalama facilities offer numerous riverside assets and amenities ideal for manufacturing, technology, warehousing and many other uses.

Businesses of all kinds are lured by Kalama's treasures

Kalama is attracting new businesses to its amenity-rich industrial properties. Several advantages for businesses to grow in Kalama include: 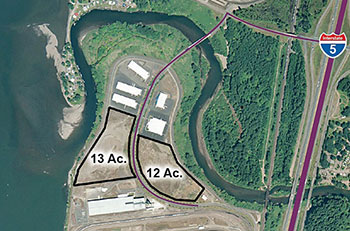 The Port of Kalama offers immediate access to Interstate 5 at exit 32.

"The Port of Kalama is in a great location," says Renee Ramey, marketing director of Steelscape, Inc. "For us it's the diversity of transportation. We work with raw materials and utilize shipping, I-5 and rail. Plus, Kalama's tax incentives have worked for us.

And the work force there is a huge draw."

One of the more pleasant surprises at the Port of Kalama is the variety of recreational activities found in its expansive backyard. A five-acre Marine Park stands out as a popular destination for both locals and tourists. Come enjoy the fishing, hiking, kayaking, skiing, hunting, or camping. And Mount St. Helens makes an impressive backdrop as you work and play.

The Port's natural beauty has long been an attraction for tourists and day-trippers. Now businesses are being lured by its treasures. 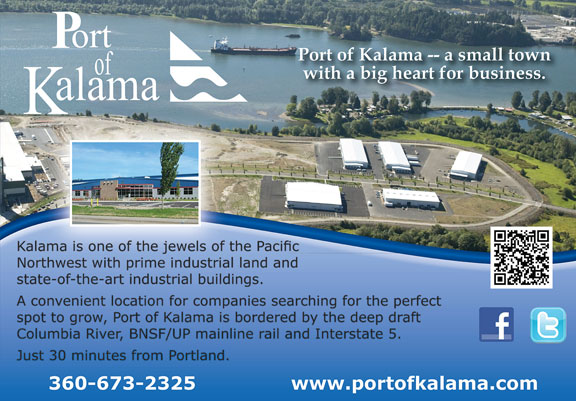 Labor, Lifestyle & Los Angeles - All Within Your Reach!

he Antelope Valley provides a thriving environment for economic growth and offers a wide range of benefits to businesses seeking to relocate or expand. Our region is unique to California in that we offer a business friendly climate, through customized incentives and an abundance of affordable commercial and industrial zoned land, and buildings.

Our workforce is second to none. With some of the highest educated and skilled people in the U.S. several of our communities boast more PhD's and Engineers per capita than anywhere in the nation! Our K-12 STEM programs are infamous for our success in education as we focus on teaching the next generation of brilliant visionaries and entrepreneurs. 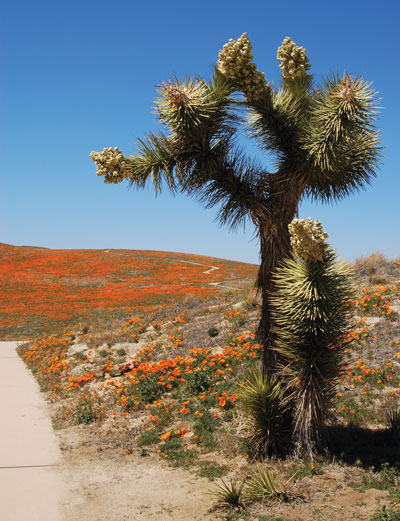 The Antelope Valley is "California's Renewable Energy Capital" and is the cradle for everything Wind, Solar and bio-fuel. Our Aerospace and Aviation community includes Mojave Air & Spaceport, Air Force Base Plant 42, Edwards Air Force Base, China Lake Naval Weapons Base as well as five municipal airports. Companies like Boeing, Lockheed, Northrop, The Spaceship Company and Scaled Composites are proud to call us home. International eyes are on the A.V. as well with the recent announcement of China's first U.S. automotive manufacturing site for battery operated buses, and Japan's proposed site to manufacture metro purpose light-rail cars. 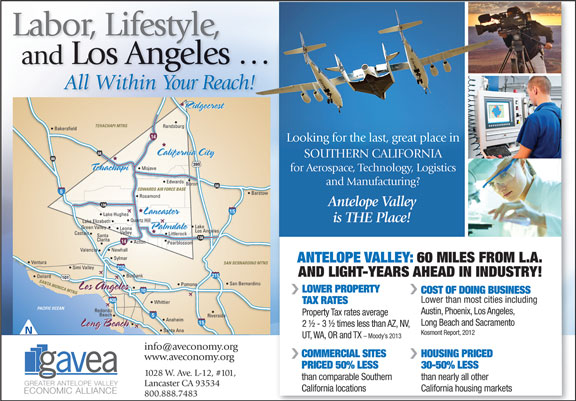