Let's focus on what works in our relationship with Mexico.

resident Obama's visit to Mexico City in May had an interesting and surprisingly novel focus on the two nations' very positive economic relations, now at an amazing $536 billion dollars in two-way goods and services trade for 2012.

This represents a quintupling of bilateral trade since 1993, the year the North American Free Trade Agreement was signed by President George H.W. Bush. President Obama's extensive references to this enormous economic relationship essentially confirmed what we have known for years: The U.S.-Mexico relationship is essentially a commercial relationship, rather than a security-based relationship. And that is - and will continue to be - good news for all of us. 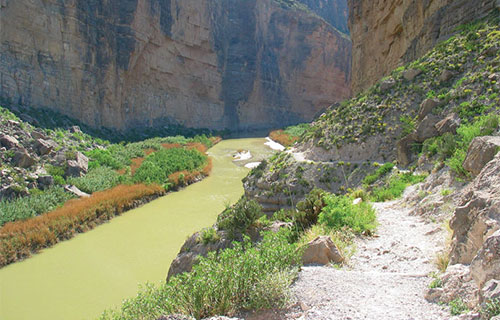 Depending on whether or not you have worked in Mexico previously, you may be somewhat confused, because after Mexico's security challenges over the last several years, many are surprised that the country has not fallen into the Pacific Ocean. And don't get us wrong: Mexico's security situation is truly challenging (although we would emphasize that this is not at all reflected in U.S. border communities' small and continually falling crime levels). But at a policy level, at least, we seem to finally realize and agree (and really, what took us so long?) that the two nations comprise an absolutely critical component of each other's economies. We would be wise to double down on our unique brand of free trade with Mexico and the opportunities it presents to us.

In our recent report done in collaboration with the New Policy Institute, "Realizing the Strategic National Value of our Trade, Tourism and Ports of Entry with Mexico," we explore what all of this means, and how we can benefit even more from this amazing and surprising economic bonanza that we have. It is quite doable, but it will take a shift in attitude and approach, a bit of investment and some creative thinking on how to most efficiently and safely move people, goods and services between our two countries through our numerous, highly congested land ports of entry.

Any Way You Slice It

To shift our approach, we first need to clearly define what works and what doesn't work in our relationship. Measured in any number of ways, trade with Mexico definitely works.

Mexico is our nation's number two export market in the world and our number three trading partner overall (imports and exports). As mentioned above, bilateral trade is estimated to have reached $536 billion in 2012, surpassing even 2011's $500-billion record amount of trade. In addition, Mexico is our nation's second most important foreign tourism market as well as the fourth-ranked in terms of spending by tourists.

Six million U.S. jobs depend on our trade with Mexico. Twenty-three states have Mexico as their number one or number two trading partner, and over 70 percent of NAFTA trade flows through our ports of entry, along with millions of Mexican visitors who have a major economic impact on the United States.

As eye-opening as these statistics are, unfortunately these are facts that are hidden in plain sight for too many Americans, citizens and policymakers alike. This is primarily due to the immensely divisive politics over NAFTA and free trade in general and the emphasis on border security more recently. Recognizing this, the Obama Administration has implemented a number of policies intended to better secure the border and to improve interagency coordination on bi-national issues as well as expand trade via the proposed Trans Pacific Partnership, whose negotiations now include Mexico and Canada.

If you continue to scratch the surface just a bit on this issue you find that fairly broad bipartisan agreement has developed in Congress on the need to improve our land ports of entry with Mexico, which are responsible for screening and facilitating legitimate trade and travel.

Sen. John Cornyn (R-Texas) is sponsoring a bill in the Senate that enables public-private partnerships at the ports of entry; in the House, Rep. Henry Cuellar (D-Texas) is sponsoring an identical bill. And the Border Security, Economic Opportunity, and Immigration Modernization Act of 2013 from the bipartisan "Gang of Eight" proposes the addition of 3,500 additional Customs and Border Protection officers to staff the ports of entry on the southern border. This additional staffing has the potential to be enormously helpful in relieving commercial, passenger and pedestrian congestion at our ports of entry with Mexico.

What does all of this mean for your business? First of all, the policy momentum seems to be pointing in the right direction to recognize the importance of cross-border business and to make it an easier process overall.

Twenty-three states have Mexico as their number one or number two trading partner.

To take this to a more personal level, the qualitative aspects of your firm's approach to Mexico are at least as important as developing a good business model. Business in a global context is still driven by personal interactions, and Mexico is perhaps the quintessential example of this.

The dominance of large family-owned grupos is a key characteristic of Mexican business culture, and frankly it takes time for Mexican networks to develop a comfort level with who you are and what you are trying to accomplish.

Don't expect an idea to materialize after your first trip to Mexico and a follow-up email, but do make a point of meeting with the experts at ProMéxico, a division of the Ministry of Economics that promotes investment in Mexico and Mexican business abroad.

In this era of globalization and economic statecraft, money really talks, and the reality is that our bilateral commercial "conversation" makes the talk about Mexico's security situation and our own worries over border security look small in comparison.

Refocusing on this reality and positive opportunity will be necessary in order for businesses to take full advantage of NAFTA's strategic national value as well as that of the next generation of trade agreements, which hold some of the keys to our nation's competitiveness and our economic destiny.

Erik Lee is the executive director of the North American Research Partnership, a new think tank that looks at North American trade, sustainability and security.