EU subsidies for biomass will generate more investments in the US wood industry and intensify the search for favorable wood pellet plant sites.

Thinking about renewable energy, the first things that come to mind are usually large fields of solar panels facing the sun, wind farms with revolving blades or turbines behind dams producing hydropower. But another source of renewable-energy already accounts for about half of Europe´s renewable-energy consumption — biomass.

"Analysts expect wood pellet consumption to grow to as much as 29 million metric tons by the year 2020. "

Wood pellets have only become an important part of this boom in the past few years. Owners of large coal-fired power stations in Europe started searching for a way to fulfill the new EC regulations and to find a solution for the declining economic relevance of traditional coal-fired power stations due to their high carbon dioxide emissions. The answer was to give the old dirty giants a green coat of paint by “co-firing” regular coal power plants with wood pellets. Wood pellets have similar burning qualities to traditional coal and the costs of converting boilers to burn wood pellets are low. The idea of declaring wood pellets as a carbon neutral energy source was based on the assumption that the released emissions of carbon dioxide during the burning process are neutralized by the carbon that is captured and stored in newly growing trees. The idea of using wood as a renewable source was backed by environment organizations as well as by the EC itself. The EC soon realized that it was not possible to meet the goal of producing 20 percent of energy from renewable sources only through solar and wind power. Thus wood pellets were welcomed by all parties, and especially by owners of coal-fired power stations that only needed to make marginal investment to adapt their power stations to the new feedstock. Furthermore these energy firms can now benefit from tremendous pay offs through government subsidies by producing renewable-energy and feeding it into the European power grids.

The Impact on US Locations

The growing demand for wood pellets and limited European wood supplies has made investments in new markets necessary in order to build up safe and steady wood pellet supply chains for European energy producers. Since this sector is relatively new, it was not possible to rely on established specialists and the energy firms began building the entire wood pellet supply chain themselves — securing wood resources as well as producing wood pellets in the US and finally shipping them over to Europe. Germany’s RWE was one of the first companies to open a US based wood pellet production facility in Georgia in 2011. RWE Innogy Inc. founded a new subsidiary, called Georgia Biomass L.L.C, and produces 750,000 metric tons of wood pellets per year, which it ships out through the port of Savannah to Europe. Another example is the British company Drax, which built a $120-million and 450,000-metric-ton production facility in Louisiana with access to the Port of Greater Baton Rouge.

More recent pellet investment projects as well as facilities currently under construction show that the production of wood pellets is being outsourced by the energy firms to companies specialized in wood pellet production, many of which are US-based companies. These firms are 100-percent focused on sourcing the raw material, operating the wood pellet production plant and handling the logistics for transporting the renewable resource from the US to Europe. Examples of these companies include:

Based on recent projects, a typical pellet production facility with an output of 500,000 metric tons per year will create around 250-300 jobs during the construction period and 50-80 direct permanent jobs once the facility is operational. The increase in projects is also contributing to a revival of the wood industry in traditional wood locations, many of which have suffered for a long time due to the decline of the US wood industry. 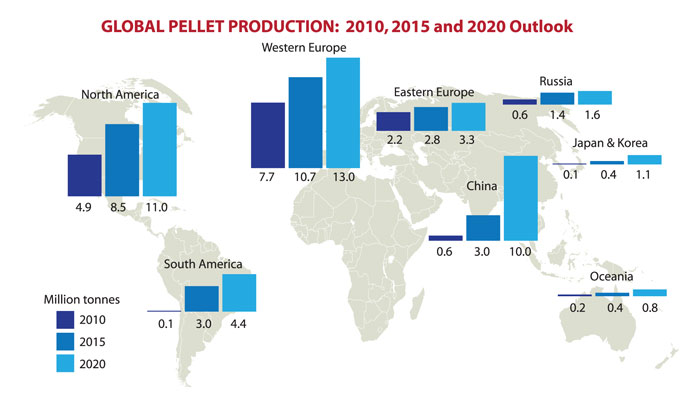 There appears to be potential for additional wood pellet investments as the pellet boom has not reached its peak. An analysis by Bain & Company compares the output in metric tons of established and planned wood pellet production facilities in the US with the forecasted European market demand (see graphic). This comparison shows that much of the new demand is expected to come from the UK, where the government has started subsidizing companies for co-firing coal power plants with biomass.

What are Investors Looking For?

Wood pellet companies are usually looking for similar location criteria in their site selection process, which can be summarized as follows:

There are risks that an environmental backlash in Europe may cause some countries to revisit the subsidies provided to pellets as a form of renewable energy or that US environmental groups may oppose the use of US forest resources for exports. The recovering housing market in the US will also create competition for wood that could affect prices. For the time being, however, the combination of growing European demand for pellets and ample US forest stocks should continue to generate new investments in US pellet producing facilities.