How To Win, Texas Style

Lots of companies need to be in Texas. But increasingly companies want to be in Texas.
That combination in 2012 resulted in a landslide win for the
Lone Star State in its run for the Governor’s Cup. 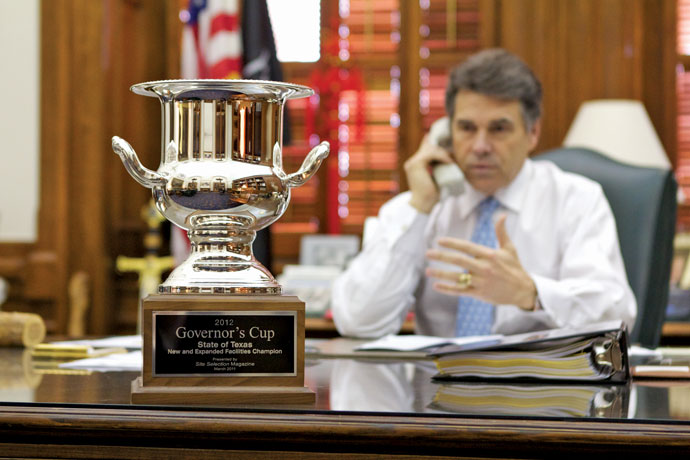 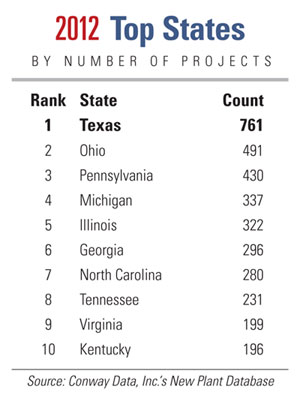 ot so fast, Buckeyes. Texas is back in a big way with a commanding first-place finish in the 2012 facilities race to claim the Governor’s Cup after a 34-project loss to Ohio last year. Not only did Texas reclaim the coveted trophy, but it did so with a whopping 761 projects, 270 more than first runner-up Ohio, which held its own relative to last year’s tally with just seven fewer projects (491). Pennsylvania keeps its third-place finish (430), and Michigan (337) and Illinois (322) round out the top five.

Site Selection awards the Governor’s Cup each year to the governor of the state with the highest number of qualified capital investment projects the previous calendar year. The publication’s proprietary New Plant database is populated with private-sector projects that meet one or more of these criteria: an investment of at least US$1 million, creation of 50 or more new jobs or construction of new space of at least 20,000 square feet (1,860 sq. m.). The magazine does not count equipment upgrades or additions nor construction jobs in its final numbers.

“This is a confirmation of the men and women of the Texas legislature understanding that if we will continue with the predictability and stability of tax and regulation and legal policy that allows entrepreneurs to keep more of what they earn, then we will become the job creation magnet in America,” Gov. Rick Perry told Site Selection on February 21st. “That is what has happened.”

The Lone Star State’s business attraction story did not begin in 2012. Site Selection has awarded several Governor’s Cups to Gov. Perry in recent years, and his make-the-business-climate-better agenda is the main driver of his economic development success. That and economic development expertise in the state’s cities and towns that mirror his intent to make Texas a natural home for business is a combination that delivers results. Site Selection’s Top Metros and Top Micropolitans include numerous Texas communities (see Top Metros, for how they secured those wins).

It’s hard for other states not to notice Texas’ success. Whether cases of blatant imitation or the political will finally being in place, states are now doing what Texas has been doing for years. In his State of the State address in late January, Gov. Perry pointed to his Louisiana counterpart Bobby Jindal’s interest in doing away with his state’s income tax. He mentioned Michigan becoming a right-to-work state in 2012. He noted Florida Gov. Rick Scott enacting education reform policies like those of Texas. Gov. Perry told this publication after winning a previous Governor’s Cup that he welcomes such competition, because it keeps his and other states on their game, being proactive in winning capital investment and creating prosperity.

Five sectors drove Texas’ return to the front of the pack in 2012, each with significant, illustrative capital investment projects:

Several of these projects, including Apple, Dow Chemical, Kuraray, and Visa, received Texas Enterprise Fund awards to help secure the projects for Texas. In total in 2012, the TEF contracted with 14 companies that committed to more than $2.6 billion in combined capital investment in Texas over the next 10 years.

If the first two months of 2013 are any indication, Texas is off to a promising start in this year’s facilities race. On February 15th, Tenaris announced that it will build its first U.S. seamless pipe mill in Bay City, Matagorda County, Texas. With an estimated investment of $1.3 billion, the new facility will have an annual production capacity of 600,000 tons of high quality seamless pipe.

With its proximity to Houston, the world’s energy capital, and to Tenaris’ North American headquarters, the location offers a combination of favorable geography, operational logistics and availability of a skilled work force.

“Our new facility will complement our integrated global manufacturing network and work closely with our existing North American operations to further strengthen domestic production,” said Paolo Rocca, chairman and CEO. Gov. Perry was on hand to help mark the occasion.

“This announcement is only possible thanks to the hard work of state and local officials, as well as the area business community, which always plays a major role in decisions like this,” he said. “The most profound statement about our favorable economic climate comes when companies like Tenaris make an investment of this size in our state. That says that not only is Texas the best place to grow your business now, but they’re confident that we’ll remain that way moving forward.”

The new plant will generate 600 direct manufacturing jobs and offer substantial direct and indirect economic impact in Matagorda County as well as in the surrounding areas.

“With this investment, we will strengthen our local production and service capabilities to address the growing demands of the energy industry,” Germán Curá, president, Tenaris North America said. “We are grateful for the support we have had from the State of Texas, Matagorda County and Bay City.”

“We had been working on this for seven months intensively,” relates Owen Bludau, executive director of the Matagorda County Economic Development Corp. “We got a lot of cooperation from a lot of individuals. It was a big team effort. The Governor’s Office contributed $6 million from the Texas Enterprise Fund. That was very helpful.”

Tenaris looked at five sites in Texas, multiple sites in Louisiana and one in Alabama, Bludau tells Site Selection.

“We gave them a good site and the transportation access they needed. We identified seven sites before the process was over with. We initially proposed two, and then they asked for more. They chose one of those two. The incentives helped, but they were not the determining factor.”

“They liked our training facility,” he adds. “We have a branch of the community college that will easily allow them to develop the tailored curriculum in the same facility. And they liked our own Grow Your Own Workers efforts that have been here for a number of years.”

“This is a big win for Texas,” says Fred Welch, vice president for regional economic development, Greater Houston Partnership. “Tenaris’ expansion into Bay City will greatly benefit the Houston region through increased activity in cargo and goods that will flow into and out of the Port of Houston.

“It is another testament,” he says, “to the excellent business climate in our state.” 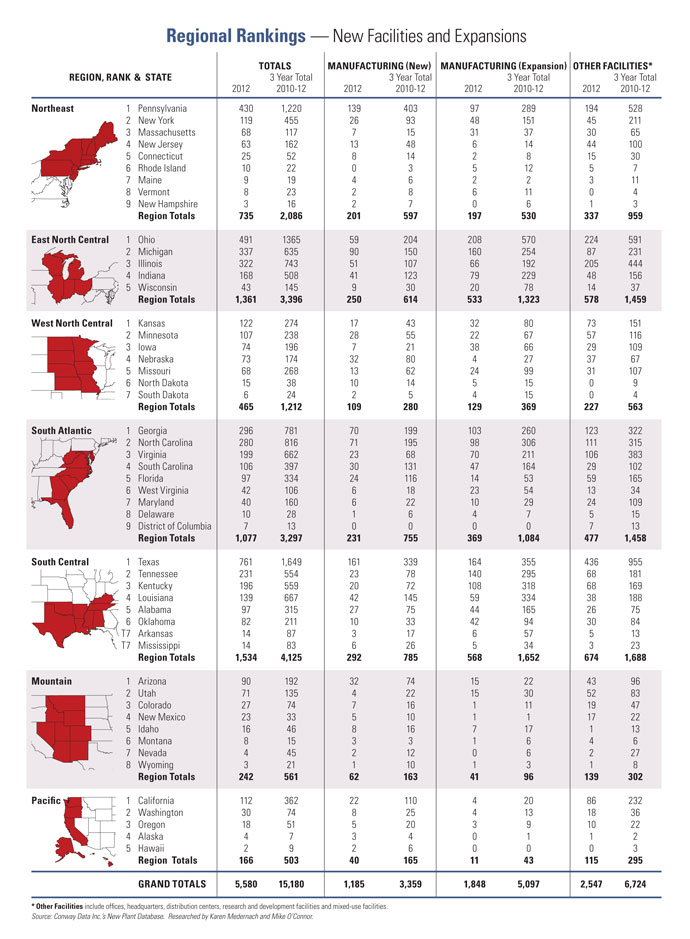 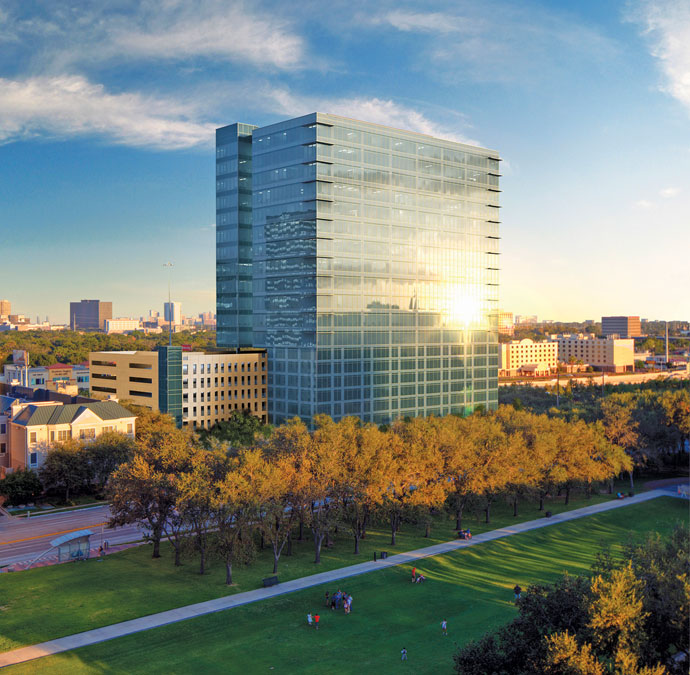 Datacert, a leading provider of enterprise legal management solutions, will relocate its headquarters to 50,000 sq. ft. (4,645 sq. m.) of space in this LEED-Platinum Skanska USA development in the Uptown/Galleria submarket of Houston when it opens in summer 2013.
Photo courtesy of Skanska 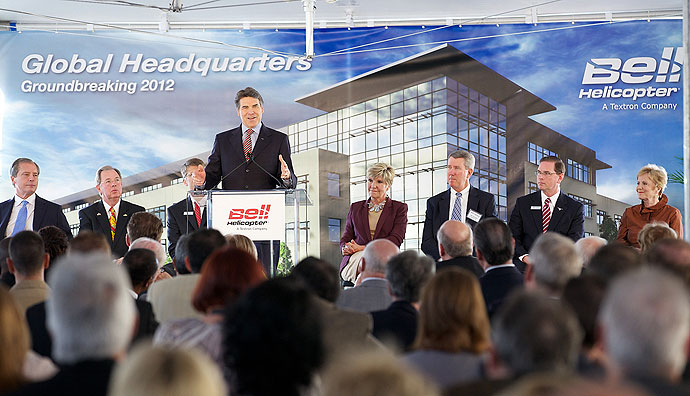 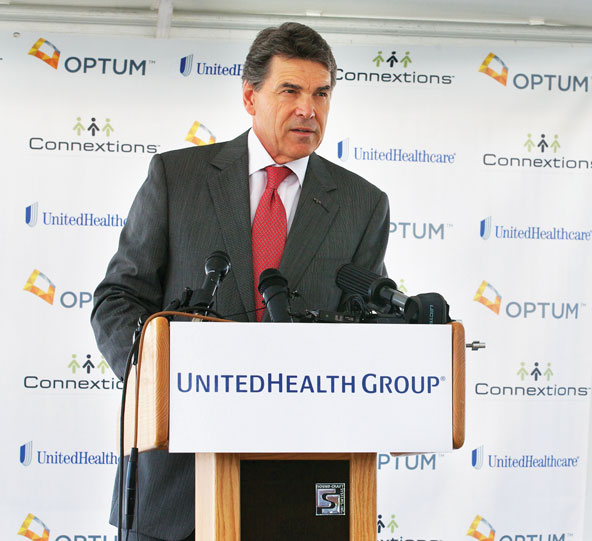 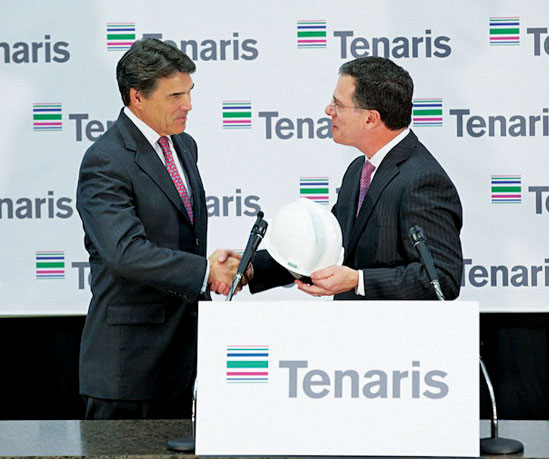 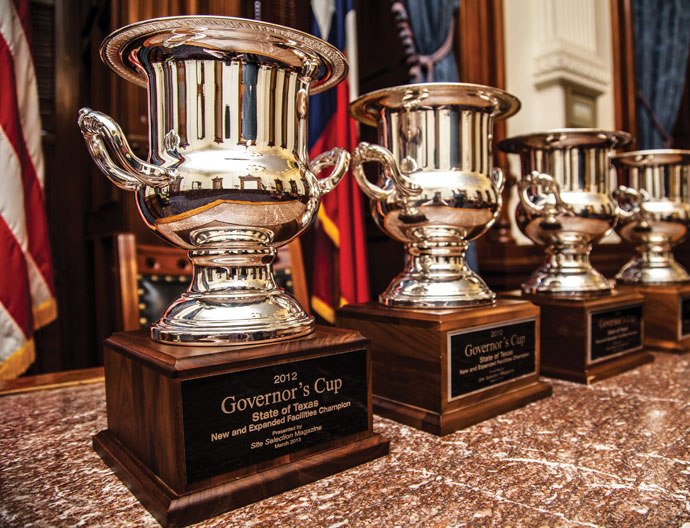