Younger entrepreneurs lead a wave of investment in North Florida. 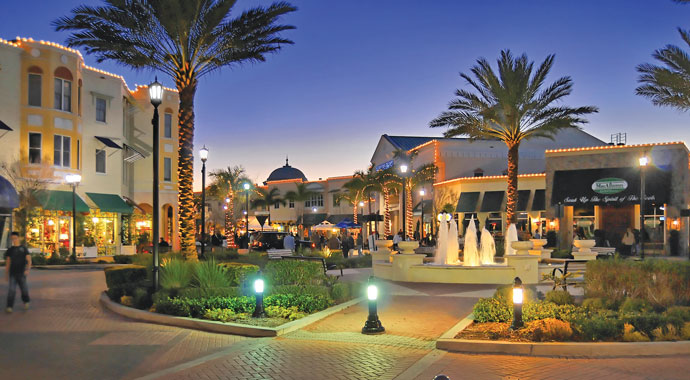 Main Street of Lakewood Ranch in Bradenton, Fla., is not the only place springing forth fountains in the Sunshine State. All across the peninsula, innovative ideas are coming from young entrepreneurs who are finding Florida to be a welcoming haven for business.
Above photo courtesy of Bradenton Area EDC
by RON STARNER
F

In Jacksonville and Pensacola, money is flowing into the local economy as younger entrepreneurs capitalize on a talented work force, a rapidly growing population base, and an influx of technology investment.

If agriculture, timberland management and paper mills once ruled the day in North Florida, the region more recently has been revitalized through a combination of research-driven innovation and progressive leadership.

David Brown — founder, chairman, president and CEO of Web.com in Jacksonville — says he could build his website development company virtually anywhere in the world, but he deliberately chose Duval County in Northeast Florida as the firm's home base.

"We are very fortunate," says Brown. "We serve small businesses, and that market is just beginning to embrace the Internet as a sales and marketing medium. We have added 300 people in the last 18 months in Jacksonville. We reside in a 120,000-square-foot office building on the south side of Jacksonville. We are only three years into our 10-year lease, and we are now taking on more space in an adjacent building. At the rate we are growing, we will take on more space in chunks."

Big chunks, apparently. Web.com more than doubled its 2011 revenues of $234 million to about $500 million in 2012, and it continues to experience rapid growth in the first quarter of 2013. The firm now employs 500 workers in Duval County and 1,400 more in additional locations around the country. 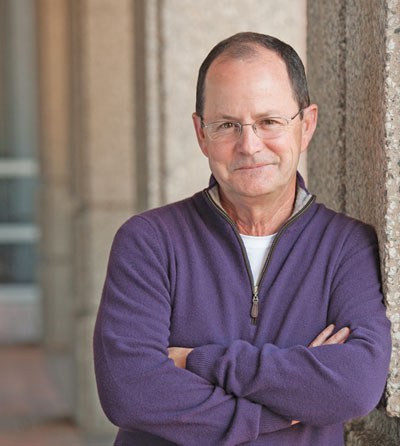 Web.com is getting more exposure, too, as evidenced by its recent sponsorship of the second-highest professional golf tour in the U.S. "We are now the umbrella sponsor for the Web.com Tour. It used to be known as the Nationwide Tour," says Brown. "It is the pathway for professional golfers to reach the PGA Tour. It gets our name out there. Our business now has over 3 million customers, and that number is growing every day.

"Our financial metrics show that our growth rate is accelerating," Brown adds. "That will continue for the foreseeable future. We focus on creating tools that make our employees more effective. We have no trouble hiring and retaining people here. Jacksonville has a good university system, and lots of graduates are looking for employment here. We hire a lot of recent college graduates."

Brown says he likes Jacksonville, a metropolitan area of 1.37 million people, for a number of reasons. "There are many technology professionals in Jacksonville because it is a pretty good place to live," he notes. "When we recruit executives from New York or Chicago or Washington, D.C., it is very easy to get them to relocate and come live here. Taxes are low in Florida relative to most of the states where our people come from, and Jacksonville has a lot of positive attributes — golf, tennis, boating, recreation of any kind — and we have a great airport."

Web.com has been based in Jacksonville since Brown founded it in 1999. "We survived during the difficult days following the burst of the dot-com bubble and took the company public in 2005," he says. "Almost all of the companies in our space failed during the burst, but we endured and are now stronger than ever."

Randall Onstead, president and CEO of Bi-Lo Holdings LLC, says his own firm is in growth mode following its recent acquisition of Winn-Dixie Stores Inc. Bi-Lo announced last March it would move the parent company headquarters from Greenville, S.C., to Jacksonville.

Taking advantage of more than $6 million in state and local incentives, Bi-Lo is investing $84 million to consolidate its headquarters in the Florida home of Winn-Dixie. "Jacksonville and Greenville were both considered, but Jacksonville was chosen for a number of reasons," says Onstead. "The state and local entities really worked well with us. They offered us incentives that helped us make the decision. Plus, we already had an infrastructure in place that could handle the new company in Jacksonville.

"When we recruit executives from New York or Chicago or Washington, D.C., it is very easy to get them to relocate and come live here."
— David Brown, founder, chairman,
president and CEO, Web.com

"Jacksonville also has a very good work force available to us, and the quality-of-life issues here are attractive to us in recruiting talent to our organization going forward," he adds. "Greenville is a wonderful place too, but Jacksonville became our first choice." Following the merger, Bi-Lo now has 1,100 employees at the corporate headquarters and about 6,000 total workers in the Jacksonville area. The supermarket chain operates nearly 700 stores across the Southeast.

Gray Swoope, secretary of commerce for Florida and president and CEO of Enterprise Florida, says that Gov. Rick Scott is committed to making the 19.2-million-resident Sunshine State an even hotter business climate for expanding firms like Web.com and Bi-Lo. 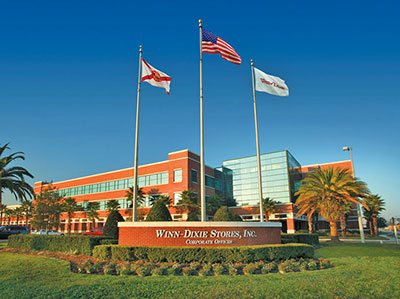 After Bi-Lo Holdings LLC of Greenville, S.C., acquired Winn-Dixie Stores Inc., based in Jacksonville, the newly combined company decided to consolidate the corporate headquarters of the merged entities at the existing campus of Winn-Dixie in Duval County, Fla.
Photo courtesy of Bi-Lo Holdings

The governor's goal is to create 700,000 new jobs for Floridians in seven years. "In our first year, 2011, we focused on building our key partnerships again — working with our economic developers around the state and letting people know that Florida can compete," Swoope says. "In 2012, we focused on external site selection audiences. We conducted seven international trade missions under Governor Scott and strengthened the tools in our toolbox. This year we are unveiling a brand strategy for Florida and coming out with a comprehensive sites database."

The latest project tallies show that Florida's new approach to economic development is reaping some big wins. From Univision's $274-million new headquarters in Doral in Miami-Dade County to Verizon Communications' $50-million financial services center in Lake Mary in Seminole County, Florida is attracting a bevy of both foreign and domestic capital investments.

A case in point is Pensacola, Florida's western-most metro area, where a combination of entrepreneurs and defense-related firms is changing the landscape of the regional economy.

The Navy Federal Credit Union is growing so fast in Pensacola that expansion is virtually constant. Since coming to Escambia County in 2003, NFCU has grown to over 2,800 employees in a four-building campus on the western outskirts of Pensacola.

"We are still growing," says Debbie Calder, senior vice president of the Greater Pensacola Operations of NFCU. "We added 644 jobs last year, and the year before that it was 447. We will add another 200 jobs in the first quarter of this year. Our continued membership growth in the credit union is driving this."

Calder says NFCU likes the 450,000-resident Pensacola MSA for many reasons. "Pensacola has a strong labor force, a good concentration of our own membership, land availability and affordability, and useful incentives," she says. "Jacksonville, Hampton Roads, Virginia, and Pensacola were the three finalists out of 75 sites that we initially considered all across the country a decade ago. We were so impressed with the available and hard-working work force here that we made a corporate decision to grow our business in Pensacola." 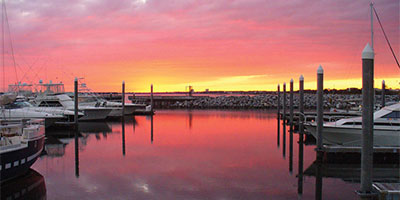 In addition to its sunshine and inviting beaches, Pensacola is home to a rapidly growing industrial base orchestrated by a progressive mayor and transplanted entrepreneurs.
Photo courtesy of The Zimmerman Agency

Calder points out that "all branches of the U.S. Armed Forces serve at the Pensacola Naval Air Station. A lot of dependents and retired Navy personnel work here too. That makes for an excellent labor pool for us."

Calder adds that NFCU has "a phenomenal relationship with the University of West Florida and Pensacola State College. They have both gone out of their way to show their value to us. We have several certificate programs with UWF, where they teach our employees right on our campus. We also have a tuition reimbursement program at Navy Federal, and that helps our employees too."

Now that NFCU is maximizing its space on campus, Calder notes that, "we would like to expand here again. That is why we acquired the property next door, but we do have options. We wouldn't be very smart if we didn't." 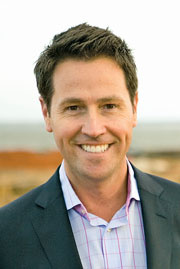 Much of the energy behind Pensacola's resurgence is coming out of Mayor Ashton Hayward's office. Just 43 years old, Hayward is helping to transform a city that five centuries ago was the very first European settlement in America.

"Pensacola is a diamond in the rough," he says. "For so long, we had an inferiority complex, and Pensacola was not known as a city that was friendly to business. When I ran for mayor and got elected a little over two years ago, I pledged to change that."

Since taking office in January 2011, Hayward has revitalized downtown and spearheaded an 87-percent increase in CBD occupancy, completed an $82-million expansion of the Pensacola airport, enticed UPS to move its regional distribution hub from Mobile to Pensacola, and launched an "Upside of Florida" branding campaign to inject a positive message into the community's economic development marketing.

"You have to show businesses the benefits, solutions and value that you as a city bring to the table," says Hayward. "That is why we built new community centers and brought new landscaping to Main Street and the Bayfront Parkway. That's why we lowered the millage rate a quarter point and secured a $3.6-million grant from the state to enhance our port. That's why we beefed up code enforcement."

Developers are taking notice and betting big on Pensacola's future. One of them is Quint Studer, founder and owner of The Studer Group and the Blue Wahoos, the minor league baseball team based in Pensacola.

"Human capital is the number one thing that companies need to be successful," says Studer, who has authored numerous best-selling business books, including "Hardwiring Excellence" and "Results That Last." "We all need talent, and that is Pensacola's key advantage. Also, people like living here and it is affordable."

"It was the least expensive stadium that opened anywhere in America in the last decade," he says. "We won stadium of the year and organization of the year in multiple publications."

In its first year, 2012, the 5,038-seat stadium for the Blue Wahoos sold out 48 games out of 68 home dates. A big reason was Billy Hamilton, considered the best prospect in the Cincinnati Reds' organization. He was the shining star for the Double-A Wahoos and helped fill up the stadium on a nightly basis.

"Scouts come here and bring their families," says Studer. "We decided that in our community, people come to our ballpark to socialize, and so we made this a very fun place to be."