International companies find Greater Fort Lauderdale
to be a haven for headquarters operations. 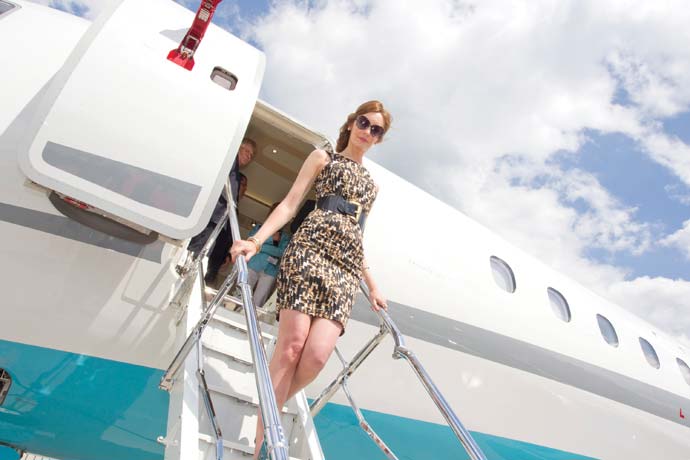 rivate Jet Charter, a London-based company that arranges upscale chartered flights for clients around the world, could have chosen virtually any major market in the U.S. for its North American headquarters.

The search for a U.S. home led the U.K. firm to Fort Lauderdale, where the rapidly growing company is establishing a regional headquarters that will facilitate its expansion throughout the continent.

"We were looking at several options — New York, Chicago, Las Vegas and other locations — and all of the most important site selection factors led us to Fort Lauderdale," says Hugh Courtenay, founder and CEO of PJC. "Fort Lauderdale has a very busy private jet airport. It has the second largest number of private jet movements in the U.S. That factor, combined with tax incentives and other desirable qualities, convinced us to locate our North American regional headquarters in Fort Lauderdale."

PJC is now one of more than 150 corporate, division and international regional headquarters operations that call Greater Fort Lauderdale home.

Courtenay tells Site Selection that Fort Lauderdale offered everything PJC was seeking in a permanent home base in America. "The airport here is very easily accessible, and the people who run it are very nice," he says. "We opened an office in the U.S. because we were getting more and more American business. We used to have staff that were on call in Europe almost 24 hours a day. We decided, after a nationwide search, to open an office in Florida, and we are looking to open one in California in a few years."

The folks at the Greater Fort Lauderdale Alliance CEO Council were especially helpful, notes Courtenay. "They were fantastic," he says. "They pointed us in the right direction in getting us into our new offices and getting us set up. From the real estate people to the lawyers, they assisted by connecting us to the right people at each step."

Courtenay adds that "our downtown location is a very good corporate area. A lot of high-net-worth individuals are in this area, and that is who we cater to."

PJC maintains offices in London, Dubai, Moscow and Nice, France. "We have six people working in the Fort Lauderdale office, but we are looking to expand the business here and grow," says Courtenay. "Our business is picking up. It takes a couple of years to make the right contacts, but we expect to grow rapidly since this area is a gateway to Latin America."

They are saying the same thing at the Latin American headquarters of Emerson, a diversified manufacturing and technology company that recently announced its own expansion in Sunrise.

"Latin America continues to be a major growth market opportunity for Emerson, and our U.S.-based executives here in Sunrise engage with our customers and our operations throughout Latin America," said Alex Blochtein, president of Emerson Network Power, Latin America. "The cost efficiencies achieved by consolidating our regional headquarters in Sunrise have been significant, and the ability to take advantage of direct air travel, proximity to a large number of Latin America-related companies and branch offices, enhanced collaboration among our businesses, and the availability of a large multi-lingual labor force made Sunrise a logical choice for our Latin America regional headquarters."

Blochtein noted that Enterprise Florida, the City of Sunrise and the Greater Fort Lauderdale Alliance CEO Council all played a role in facilitating the deal.

Emerson employs 16,000 workers at 30 manufacturing locations around Latin America. In 2012, the company registered sales of $1.4 billion in Latin America and $24.4 billion worldwide. 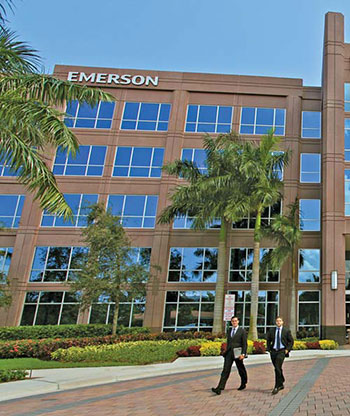 Also on the international front, U.K.-based SmartWater CSI made the decision to open its first-ever U.S. headquarters in Fort Lauderdale. The company moved into space last fall at 110 East Broward Boulevard and plans to have more than 100 employees there by mid-2014.

A company that has developed a revolutionary technology that deters theft and reduces crime, SmartWater selected Fort Lauderdale after considering locations in New York, Boston and other places on the East Coast.

"We settled on Florida primarily because of the attitude we encountered here," says Phil Cleary, founder and CEO of SmartWater. "We did a pilot test of our theft-deterrent system in Tallahassee in 2007 and achieved a 33 percent reduction in burglaries there. We were comfortable that our system would work in the U.S., and so we started looking at various locations in Florida."

SmartWater produces and markets an asset protection system that involves the application of a clear liquid that contains a unique forensic code that is extremely robust and guaranteed to last a minimum of five years in all kinds of weather. The firm's clients include Rolls-Royce, British Telecom and Shell, among others.

"While we looked initially at other cities in Florida, we honed in on Fort Lauderdale because the lines of communication here were very good," says Cleary. "The reception we received compared to other cities was the highest level we found in the whole state. The lines of logistics were very good here too, in terms of getting to and from the U.K., and the police chief in Fort Lauderdale embraced the new technology. The talent pool in Broward County in forensics and business was very good for our company, and that made it easy to locate here."

Cleary adds that "Enterprise Florida and the Greater Fort Lauderdale Alliance CEO Council were the catalysts for doing the deal. They gave us the confidence that, if we suddenly started expanding our business rapidly, we knew the infrastructure could handle it. I can't overstate the importance of that help." 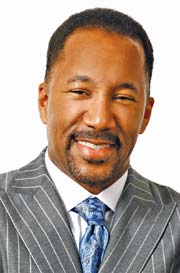 Astor & Black is creating 62 high-wage jobs and leasing about 22,000 sq. ft. at the Miami Herald Building at 2010 N.W. 150th Avenue in Pembroke Pines. The company is investing $1.475 million in capital expenditures for construction, renovation and equipment.

Richard Dent, CEO of Astor & Black, says the firm considered headquarters locations in Ohio, New York and Florida. "We reached out to Enterprise Florida and it became a simple conversation," he says. "The level of aggressiveness of Gov. Rick Scott and Enterprise Florida was amazing."

The site search in Florida "came to Miami-Dade, Broward and Palm Beach counties," says Dent. "We wanted to be close to the airports in both Miami and Fort Lauderdale. When we met Robin Ronne [managing director of the Greater Fort Lauderdale Alliance CEO Council], that really sealed the deal. They took care of everything we needed. We chose Pembroke Pines because it is such a convenient location. There are a lot of hotels there, it is easy to get to fine shops and restaurants, and it is very close to the airports and all of the major highways."

This Investment Profile was prepared under the auspices of the Greater Fort Lauderdale Alliance. For more information, contact Robin Ronne, managing director of the CEO Council of the Alliance, at 954-627-0126 or email him at rronne@gflalliance.org.
On the Web, go to www.gflalliance.org.