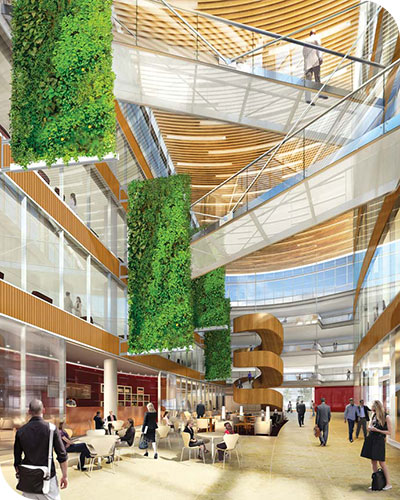 In February 2011, GlaxoSmithKline signed a 15.5-year agreement with Liberty Property Trust to lease a new $82-million facility now being built at Five Crescent Drive at The Navy Yard in Philadelphia. The company will consolidate 1,350 employees at its “workplace of the future” this year.
Image courtesy of GSK and Liberty Property Trust

Iroko Pharmaceuticals was little more than a seed five years ago. But it planted itself in two of the most fertile growth media for life sciences: Greater Philadelphia and the Commonwealth of Pennsylvania. On Dec. 12, it achieved full bloom with a new global headquarters, and sought to seed the future at the same time.

The new facility at Navy Yard Corporate Center in Philadelphia is the seventh sustainable building to be developed in the complex by the team of Liberty Property Trust/Synterra Partners, and is designed to accommodate about 180 employees at maximum capacity.

"The city is a wonderful place for the life sciences because of its highly educated work force and research infrastructure. Our management team hails from around the world, and we choose to be in Philadelphia," said Osagie Imasogie, senior managing partner, Phoenix IP Ventures, and chairman of Iroko, at the groundbreaking in Sept. 2011.

The DNA of Pennsylvania life sciences criss-crosses companies, the Commonwealth and scientific history itself. Imasogie and Iroko President and CEO John Vavricka both have had international experience at GlaxoSmithKline. Vavricka also worked for Chiron and helped manage parts of that company's merger with Novartis. GSK is currently moving into its own new building at Navy Yard, beginning this month.

Novartis, meanwhile, announced in August 2012 that it is partnering with the University of Pennsylvania to build a first-of-its-kind Center for Advanced Cellular Therapies (CACT) on the Penn campus in Philadelphia, contributing $20 million toward a venture which will bring full circle the 1960 discovery of the Philadelphia chromosome, the first description of a chromosome abnormality that causes cancer.

On the same day as its grand opening, Iroko announced its own new relationship with Penn, as the company funded the creation of a new science scholarship program for area public high school students. "Our new partnership with Penn is part of our ongoing commitment to invest in local education, helping to support and build future community leaders," said Imasogie.

"From our world renowned research institutions like University of Pennsylvania and University of Pittsburgh, to the early-stage companies that get their start here like Carmell Therapeutics in Pittsburgh, to mature and global pharmaceutical companies in Southeast PA, we are developing the drugs, vaccines, devices and diagnostics that are saving lives and improving the quality of life globally," says Pennsylvania Gov. Tom Corbett.

The infrastructure for such an ecosystem has many parts, from the Pennsylvania Dept. of Community and Economic Development and the Governor's Action Team to the Life Sciences Greenhouses in Pittsburgh, central Pennsylvania and Philadelphia to the universally acclaimed Ben Franklin Technology Partners program. Those partners, says Corbett, "help to fill the gaps required to take an idea and make it a company."

Cadence, Inc., a contract manufacturer of surgical devices, specialty blades and needles based in Staunton, Va., is currently renovating a leased facility in Cranberry Township, outside Pittsburgh, in preparation for an April opening.

"We looked at a number of different regions, and people within our network," says Pittsburgh native Alan Connor, president of Cadence. Those candidate locations included Boston, Minneapolis-St. Paul, Northern California, North Carolina and parts of Texas, as well as the firm's existing locations in Virginia and Rhode Island.

In the end, the affordability of the medical device environment, availability of talent in the field and the particular team members Connor wanted led him to Greater Pittsburgh, where the company will create up to 60 new jobs.

"We know the educational infrastructure in the region to be excellent," he says, "likewise with the skilled work force." 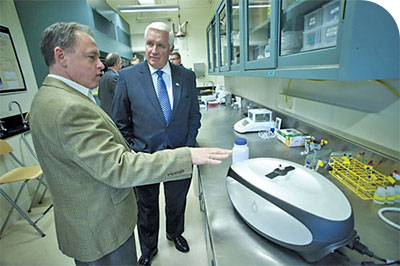 Back in the Philadelphia area, ViroPharma President and CEO Vincent Milano joined Gov. Corbett in Sept. 2012 to announce the company would expand its complex at Eagle View Corporate Park in Exton, in Chester County, adding 151 new, high-paying jobs to its existing payroll of 188. Milano, the current chair of Pennsylvania Bio, has seen his firm grow through several generations of workspace, but says this may be the last: "We've designed it so we have plenty of room to expand if we need it."

Milano didn't venture to look outside the area. Even so, the project has benefited from the involvement of the Governor's Action Team, which he connected with through the Chester County Economic Development Council.

"That allowed us to get access to some capital to fund part of the fit-out," he says, contingent on ViroPharma's commitment to create new jobs. Milano calls it an "exceedingly positive experience, including the governor himself. We were nervous we'd be caught in a conundrum where, because we weren't threatening to leave, we wouldn't get the funds." Instead, he says, DECD "treated us with the respect we deserve as a company that wants to stay here, and they were very responsive in that regard."

Milano says his location offers proximity to officials in Washington, D.C., as well as to the investment community in New York. But the optimum proximity continues to be to the talent.

In essence, the area is the state in microcosm, when it comes to a unique blend of infrastructure, institutions and talent designed to support life sciences. From research to manufacturing, says Gov. Corbett, "Pennsylvania is uniquely positioned to offer the entire bioscience ecosystem in one location."


Celebrating its 50th anniversary in 2013 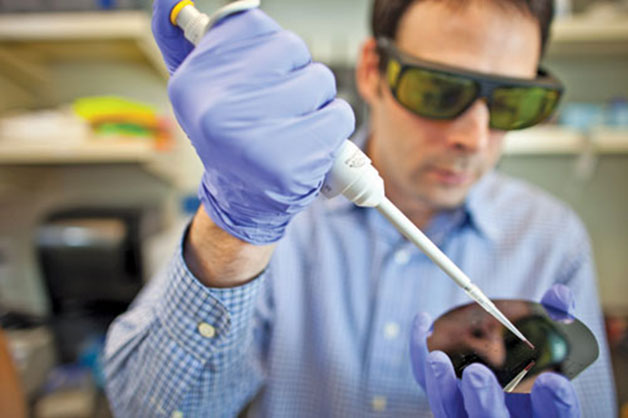 C elebrating its 50th anniversary in 2013, University City Science Center in Philadelphia has seen more than 350 organizations graduate since its inception. The average salary at graduate companies is $89,000, and $64.5 million in tax revenue is contributed to the city and state annually by graduate and resident organizations. One current resident firm is Optofluidics, shown above. In early 2011, the center helped the firm attract $50,000 from BioAdvance, a life-sciences investment fund backed by the Commonwealth of Pennsylvania. Optofluidics was named Philadelphia Life Science Startup of 2012 by the Philadelphia Chamber of Commerce. 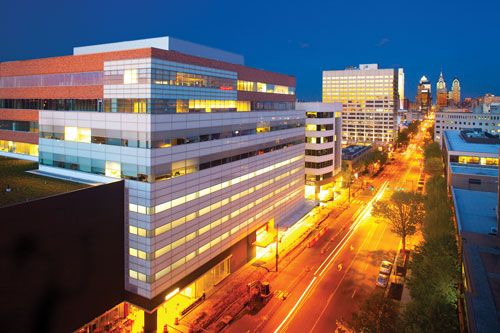