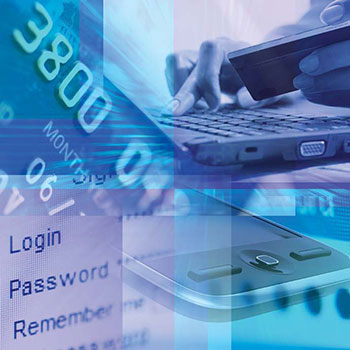 ybersecurity is in the national headlines, after serious data incursions, an executive order from the White House and, in February, accusations of data theft from U.S. companies by a Chinese military group. In Maryland, cybersecurity has been a top priority for years.

It was January 2009 when Gov. Martin O'Malley joined Maryland's Congressional delegation, federal and military officials and business leaders at the National Institute of Standards and Technology (NIST) in Gaithersburg to unveil a policy report that called for establishing Maryland as the nation's epicenter for cyber security.

"Cyber security touches everything we do — from grocery shopping to banking, to heating our homes and talking on cell phones," said O'Malley that day, citing Maryland's leadership in computer systems design job creation and its institutions' thought leadership and training in the field. "With 50,000 new computer viruses emerging every day and hackers becoming increasingly advanced, the need to protect our country, our companies and our families has never been more urgent." 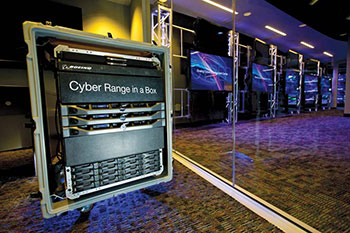 Only now, it's more urgent.

Maryland is home to more than 50 key federal facilities and 12 major military installations, including the U.S. Cyber Command at Fort Meade (the state's largest employer), the National Security Agency, the Army's Communication and Electronics Command (CECOM), now located at Aberdeen Proving Ground, and the Defense Information Systems Agency, which moved to Maryland from Virginia in 2011, bringing 4,300 advanced technology jobs. The Washington Post in January reported that the U.S. Cyber Command is seeking to more than quintuple its staff from 900 to 4,900 over the next few years.

No wonder the state can boast of 9,500 businesses employing 140,000 people in cyber-related fields. And those people can boast an average salary of $82,000.

The 2012 State New Economy Index from the Information Technology & Innovation Foundation ranked Maryland fifth overall, based in large part on its "high concentrations of knowledge workers, many employed with the federal government or related contractors in the suburbs of Washington, D.C." The graph above shows where the state stands compared to its elite peers across many of the Index's 26 indicators.

The Old Line State continues to draw new projects from such companies as Northrop Grumman, SAIC, Boeing, Cybercore Technologies and others. And a new Cyber Jobs Report places Baltimore's wealth of opportunity behind only Palo Alto and San Francisco. The report was funded by The Abell Foundation and coordinated through the Baltimore Cyber Technology & Innovation Center, and is the result of a collaborative effort between CyberPoint International, CyberMaryland, Welz & Weisel Communications, and community partners. It searched approximately 340,000 cybersecurity jobs offered by more than 18,000 companies across the country and found that Maryland had 19,413 job openings at 1,828 companies in the industry, with more than 13,000 of those openings in Baltimore.

"This study confirms what we've come to know," said O'Malley at the report's release in January. "From internships and work-study programs for high school and college students, to professional positions for established cyber workers with advanced degrees, Maryland's cybersecurity industry offers an array of opportunities for enterprising individuals. If you're interested in protecting the nation's digital highway, Maryland is the place to be."

The report cited the state's educational and training options, including cyber-related degree and certificate programs offered in Maryland's educational institutions. Fifteen Maryland colleges and universities — more than in any other state — have been designated by the National Security Agency as Centers of Academic Excellence in Information Assurance. That infrastructure continues to be strengthened. 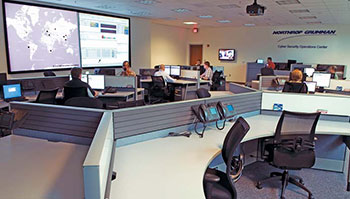 Northrop Grumman Corp.’s Cyber Security Operations Center, which opened in July 2009 in suburban Maryland, provided security monitoring for more than 105,000 clients and 10,000 servers worldwide at the time of its opening. Such centers, though they keep a low profile, have assumed a higher one in the wake of cyber-invasions of data and new directives from the nation’s capital.
Photo courtesy of Northrop Grumman

In February 2012, NIST announced a new partnership to establish the National Cybersecurity Center of Excellence, a public-private collaboration for accelerating the widespread adoption of integrated cybersecurity tools and technologies. The State of Maryland and Montgomery County, Md., are co-sponsoring the center with NIST, which will work to strengthen U.S. economic growth by supporting automated and trustworthy e-government and e-commerce. The center is supported by a $10-million federal appropriation.

"We are under attack," said U.S. Sen. Barbara Mikulski (D-Md.) at the announcement. "Every day, cyber thieves, cyber thugs, and cyber terrorists are hacking our systems, trying to take them down. They want to steal our intellectual property, our state secrets and our freedom and our prosperity. Our nation's main line of defense is right here in Maryland."

A separate NSF program, the CyberCorps: Scholarships for Service program, in August awarded a grant worth more than $4.7 million to the University of Maryland Baltimore County (UMBC), Towson University and Harford Community College. Under the national program, college students who are training in selected cybersecurity programs receive a scholarship that covers up to two years of tuition, room, and board, along with a stipend. In return, the students serve in federal cybersecurity position for two years.

In October 2012, UMBC and the Northrop Grumman Foundation announced they are partnering to launch the UMBC Cyber Scholars program, to be housed in the university's new Cybersecurity Center, and run in partnership with the UMBC Center for Women in Technology.

This new initiative is an extension of an already-strong partnership in cyber-related activities that has developed between UMBC, the foundation and Northrop Grumman, and includes the Cync program, a start-up business incubator dedicated to cultivating companies that develop innovative solutions to counter the global cyber threat.

The program is being created in response to the U.S. Department of Homeland Security's call to action regarding the shortage of trained and certified cybersecurity personnel. The program will recruit 15 to 20 new scholars annually, with special emphasis on increasing the number of women and underrepresented minorities who are being prepared for cyber security careers.

Northrop Grumman has served on the Homeland Security Advisory Council Task Force on Cyber Skills that recently provided recommendations to Department of Homeland Security Secretary Janet Napolitano. The company also worked with the University of Maryland in College Park to launch Advanced Cybersecurity Experience for Students (ACES) in June 2012.

"We are fully committed to developing solutions to help eliminate the nation's shortage of critical STEM-educated talent, and by partnering with the University of Maryland, we will address workforce challenges in the increasingly important field of cybersecurity," said Northrop Grumman President and CEO Wes Bush.

The company opened a Cyber Security Operations Center in "suburban Maryland" in 2009, the same year the state launched its CyberMaryland initiative. 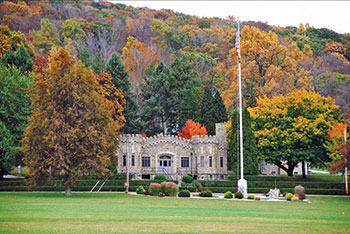 ome to the Military Intelligence Training Center of the U.S. War Dept. during World War II, then to the HQ for the Communications Command Continental United States of the U.S. Army beginning in the 1970s, Fort Ritchie, located not far from Hagerstown, officially closed in 1998. In 2006, the Army transferred ownership to the PenMar Development Corp. The following day, PenMar sold it to Corporate Office Properties Trust for mixed-use development and for potential installations from the federal government's "Continuity of Operations" program, which provides for alternate operational base locations for major federal agencies should their primary bases be incapacitated. Effective July 24, 2012, however, PenMar regained ownership of the site.

Once considered for the HQ of the newly created Office of Homeland Security, the site holds 41 parcels on 591 acres, and significant facilities, including the historic "castle" (pictured). Infrastructure includes advanced telecom, a state licensed water plant, a new electric substation, a cell tower, a wastewater treatment plant and a restaurant. It also boasts two lakes for recreation — lakes originally created in 1915 by the site's first owner, Buena Vista Ice Co., in order to make ice for harvesting.

"My board of directors is currently looking at a consulting firm to assess the property and assist in determining the best use," says PenMar Executive Director Dori Nipps. "We have not determined what that may be and are open to discussing the future with all who are interested."

ime was, classic department stores of a certain era were able to speed communications via pneumatic tube systems that shot capsules of information all over the building. Today, one of those department stores encapsulates how a region's robust data infrastructure can speed economic development.

In March 2012, IT solutions firm AiNET announced it would open its new 300,000-sq.-ft. (27,870-sq.-m.) CyberNAP data center by July 2012 in a former Boscov's department store in Glen Burnie, Md., not far from Fort Meade. Portions of CyberNAP offer specialized features for secure technology environments. The facility houses over 10,000 equipment cabinets and supports upwards of 1 million servers. AiNET is based in Beltsville and operates three other data centers in Beltsville and Laurel. AiNET was founded by Deepak Jain, a Maryland native and Johns Hopkins graduate who interned at the National Security Agency. — Adam Bruns