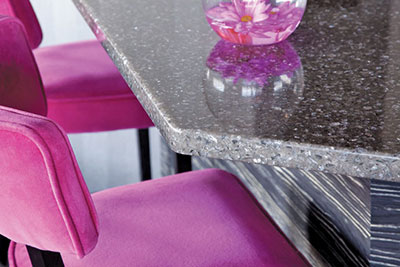 After moving for good years ago, Cambria now chooses to grow where it's planted. Here's why.

eventy years ago Stanley Davis purchased St. Peter Creamery, in the eponymous town located just north of Mankato and about an hour southwest of Greater Minneapolis-St. Paul. Davisco Foods International was born. Today, still run by the Davis family, Davisco is one of the largest suppliers to Kraft Foods, producing 370 million pounds of cheese and 10 million pounds of whey protein isolates a year, and operating cheese and food ingredient companies in Le Sueur and Nicollet, Minn.; Jerome, Idaho; and Lake Norden, S.D.

You need countertops to serve all that cheese. One of the Davis family's companies aims to feed that demand too.

Cambria is the only producer of natural quartz surfaces in the United States (all other brands are imported). It got its start in the late 1990s when Mark Davis, one of Stanley's sons, made a personal investment in a northern Minnesota business start-up on a tip from a friend of his son, Marty, who is now Cambria's president and CEO. (The family also owns Sun Country Airlines, purchased in summer 2011, also on a tip from Marty Davis.)

Last August Cambria, which employs more than 800 people, announced an unprecedented expansion of its Le Sueur production plant that will more than double the size and production capacity of Cambria and accommodate worldwide demand for its designs. When complete this spring, the expanded Cambria plant will total 750,000 sq. ft. (69,675 sq. m.) and employ an additional 220 employees. 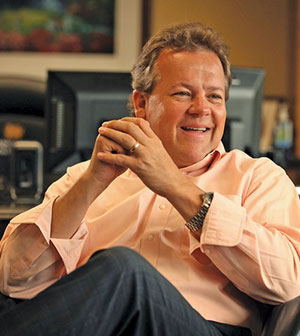 "This is Cambria's second plant expansion in six years," said Marty Davis in August. "We are fortunate to have a product that consumers desire, and this expansion demonstrates our long-term commitment to creating unique designs and establishing a strong quality supply channel for our valued partners."

In 2008 Cambria invested $52 million in its Le Sueur facility, originally built in 2000, equipping it with the newest processing technology and more than doubling its size to 350,000 sq. ft. (32,515 sq. m.). In 2010 the company opened two distribution centers in California. Along with a nationwide network of fabricators, Cambria owns fabrication facilities in Minnesota, Toronto, Cleveland and Indianapolis.

The company cites research from The Freedonia Group indicating that quartz products will continue to grow at more than twice the rate of all other stone surfaces.

The decision to invest in its home state might seem like an uncontested choice. But in an interview, Marty Davis, 48, says his team considered options in Ontario and in the northeastern U.S. Ultimately, though, the twin pulls of centralization and heritage drove the company to stay home to grow — a tendency Davis says prevails among many Minnesota-born firms.

"A lot of times, if you're privately held and a family business, it has a lot to do with where you live, where you're from, your roots," he says. Companies not forced to go elsewhere by the need to be near raw materials or a marketplace will build in the state because "they love Minnesota culturally. It's where the family is from. People stay near the nest."

Cambria's nest is where Davis' team wanted to see the company's R&D, engineering and maintenance expertise centralized. He says that was the tipping point for not going to Canada or the Northeast. Next came his people.

"The quality of the work force is a big deal," he says, a bigger deal than its cost. He finds the work ethic and personal qualities of his employees superior, whether it's unskilled workers whom the company transforms into skilled labor, or company officers. "We're very attracted to the work in rural Minnesota," he says. "They learn trades, and they're good, quality people."

Asked how state and local governments have supported the company, Davis says the local communities have a bigger impact on day-to-day business than the state or the federal government.

"Some burden business with local costs, and are regulatory zealots — that will affect you," he says, citing such an atmosphere as the reason behind the company's move from St. Peter, just to the south, in the late 1990s. "Le Sueur was very industrious," he says. "They worked with businesses to get things done the right way, but a reasonable way, and still meet the merits of the regulations. The city manager and council are really important. We look for that, and the City of Le Sueur has just been outstanding. My father has worked with them for 45 years now."

Regulation is not the problem — it's the deployment of the regulation by the city or county employees, says Davis. "Not that the business wants to get gifts or favors or wants to exploit policy, but you have a working relationship that is mutually collaborative and beneficial," he says. "What is the DNA of a community? What do they want? Understanding culturally what a community wants in its town matters, because they can take the state and federal regulations to engineer the community the way they want."

Davis compliments the Minnesota Pollution Control Agency (PCA), which Davisco's livestock business has worked with closely through the years.

"They are very good to work with — technically knowledgeable, skilled and reasonable," he says. "You can have a good working relationship to achieve the protection of air, water and quality of life and also meet the mission of the industry."

Davis sees the right-to-work discussion as a looming issue for the state. Minnesota is not a right-to-work state, but has seen neighboring territories such as Indiana and Michigan go that direction in the past two years.

"We have to be able to compete," he says. "You earn good labor. And good labor earns jobs."

The state also battles an image problem when it comes to what outsiders perceive as a high-tax territory, he says. But he reiterates what he calls a "reasonable" regulatory scheme, crafted over the years by appointees from both Republican and Democratic administrations.

"I think the DOT is one of the best in the nation," he says. "The PCA is well run. The Department of Natural Resources is well run."

What about state economic development? Has Cambria benefited from incentives from the Minnesota Dept. of Employment and Economic Development?

"Cambria has never taken a nickel from the government," says Davis. "We didn't want any money that the public could lose on our project. In fact, we let them do a TIF [tax-increment finance] project on our property — $1.4 million passed through our hands and we let the city build infrastructure for the industrial park, and we paid $380,000 in cash for our assessment."

Cambria leaders also are going out of their way when it comes to discussing a possible land swap with the state, says Davis of a situation where some state land is on one end of Cambria land.

"We said, ‘Maybe the wayside rest [stop] could be over there," he explains, "and we get to expand. We pay them, they pay us … but even in that situation, we did not try to leverage it. The first thing we told them in the meeting was, ‘Don't worry. We're building a plant here whether we do this or not.' If it works, we'd love to do it. But you can't be doing that to people, threatening them."

Job Opportunity Building Zones (JOBZ) were launched by former Gov. Tim Pawlenty to offer tax incentives for companies willing to invest in rural locations, as long as the firms created jobs and paid certain wage levels. The DEED's 2011 annual report credits the program with creating more than 7,100 jobs paying an average hourly wage of $17.36. In 2010 the program cost $26 million in tax expenditures and $14 million in property tax exemptions. The JOBZ program expires in 2015.

Le Sueur is part of a Greater Mankato region that saw another strong year in 2012, according to a February release from Greater Mankato Growth, an agency that considers Blue Earth and Nicollet counties and towns such as Le Sueur within its marketplace, even if official MSA statistics only count Mankato-North Mankato.

Among other stats, between 2011 and 2012 the average number of jobs for all non-farm businesses located in the Mankato-North Mankato MSA grew by 2.3 percent (or 1,220 jobs), the largest gain of any of the six MSAs in the state. Minnesota grew by 1.3 percent. From 2002 to 2012, the Mankato-North Mankato MSA's average job number increased by 7.5 percent, again higher than any other MSA in the state of Minnesota, which saw growth of 1.7 percent over that span.

Minnesota manufacturers are optimistic about 2013, with 85 percent saying they expect production and employment levels to increase or stay the same, according to a November survey by Minnesota DEED and the Federal Reserve Bank of Minneapolis. Forty-four percent of respondents expected orders to grow in 2013 and one-fourth expect to hire more workers.

Count Cambria among them, as it continues to see its family of family-owned enterprises build on the relationships they've cultivated, including with Mankato State University and the University of Minnesota, whose veterinary and medical schools work closely with the dairy farms Marty Davis' brother Mitch runs. The Cambria name also is affiliated with new mortgage and title companies, both based in Eden Prairie, a Twin Cities suburb.

Marty Davis says it helps to have the family's diverse portfolio of companies there to support growth.

"You have veteran DNA around you, and that's very helpful," he says of his family's holdings and network. "You may be in a new business, but you've been in one [before]. The biggest advantage is being able to leverage history and knowledge, based on your background and relationships with vendors and communities."

olliers International announced in October 2012 that the City of Fergus Falls, Minn., is seeking a "developer, investor, or visionary group" to purchase the 100-year-old Fergus Falls Regional Treatment Center, known as the Kirkbride Facility (pictured). Built in 1888, the landmark is the most complete intact example of Kirkbride-inspired architecture in the United States, and was placed on the National Register of Historic Places in 1986.

It's also a former asylum for the insane. Dr. Thomas Story Kirkbride was a 19th century physician and asylum superintendent whose ideas influenced asylum design. One interested buyer in October was a management group affiliated with another Kirkbride facility in West Virginia called the Trans-Allegheny Lunatic Asylum, now operated as a tourist attraction.

The property contains over 500,000 sq. ft. (46,450 sq. m.) of existing facilities and rests on 34 acres (13.8 hectares) of land within the city limits of Fergus Falls, the county seat of Otter Tail County, not far from Fargo, N.D. The site is a candidate for millions of dollars of incentives, and sits in an area that is a hub of higher education for the region. As of December, 10 prospects had indicated interest. The city's contract with Colliers extends into March 2013. If no buyer is found, a Dec. 2013 demolition date looms, though the date may be extended.
— Adam Bruns 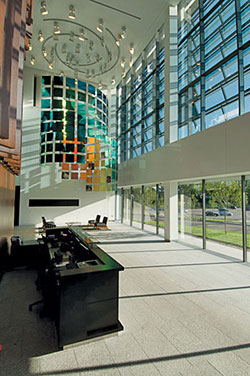 Photo courtesy of St. Jude
A

central player in the Minneapolis-St. Paul medical device cluster, St. Jude Medical invested in a headquarters expansion in St. Paul that was completed in 2009. Over the next 20 years, St. Jude Medical has the option to add more buildings and parking on the 10-acre (4-hectare) site. It's also consolidating at a new project in Plymouth, in Hennepin Co.

The 2012 Global Life Sciences Cluster report from Jones Lang LaSalle notes, "Regions anchored by smaller cities are rising in influence, demonstrated by strong showing by Minneapolis-St. Paul [No. 9 in the U.S.] and Philadelphia overshadowing larger cities in their regions, such as Chicago and New York."