Be In That Number

When it comes to projects along the Mississippi, the ‘Saints’ have the edge.

ite Selection tracked 329 corporate facility projects between July 2011 and December 2012 landing in the dozens of counties lining the Mississippi River. Louisiana led the way among river states. County tallies were led by Hennepin County in the Minneapolis-St. Paul metro area. Dakota County, also part of the metro, came in third.

Among the projects up north are a manufacturing expansion from Emerson in Eden Prairie, a distribution project from Medline Industries in Rogers, Cima Nanotech's office in St. Paul, an aircraft parts manufacturing expansion in Burnsville from Goodrich and St. Jude Medical's plan to add 275,000 sq. ft. (25,548 sq. m.) to a former AGA Medical site in Plymouth, where the St. Paul-based company is consolidating cardiovascular division operations from leased sites in Minnetonka and Maple Grove.

"Because many of the future growth opportunities for St. Jude Medical are expected to arise from devices in the Cardiovascular Division, we're excited to develop a Plymouth Campus that will not only help streamline operations and business activities, but also bring employees together under one roof," said Frank J. Callaghan, president of the St. Jude Medical Cardiovascular Division.

After closing on financing Jan. 30, the St. Louis Cardinals and the Cordish Companies broke ground Feb. 8 in downtown St. Louis on the first $100-million phase of Ballpark Village, a $700-million mixed-use development rising on 10 acres (4 hectares) adjacent to the $411-million, privately financed Busch Stadium that opened in 2006.

Cordish stated that the development team remained committed to the project despite difficult economic conditions, including challenging credit markets. In order to the get the project under way, the St. Louis Cardinals and the Cordish Companies made additional financial commitments to the project, including committing to purchase all of the public infrastructure bonds.

Memphis and Shelby County, Tenn., continue to be among the leaders along the river corridor, recently welcoming a $23-million, 486-job expansion from New Breed Logistics, a third-party logistics firm. Shelby County has seen other recent logistics projects from Nike and Great American Steamboat Co. The area also saw a 2012 headquarters expansion from FedEx, new manufacturing investments from Nucor, Cummins and paper products firm KTG, and a pharmaceutical manufacturing and R&D expansion from Oxford Diagnostic Laboratories. 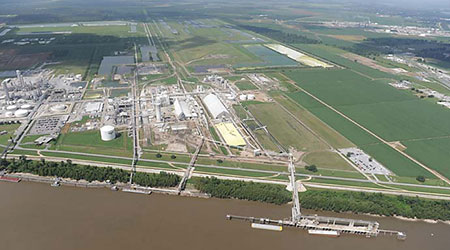 Mosaic Co. operates an integrated supply chain and manufacturing model in Louisiana that features its Uncle Sam site on one side of the river feeding key resources to the Faustina site on the other side.
Photos courtesy of Mosaic and Louisiana Economic Development

Among the projects to land in Baton Rouge, La., in 2012 was a 75-person studio from motion picture special effects firm Pixomondo, which is investing $1.2 million and leasing space at the Celtic Media Centre complex, and benefiting from the state's popular motion picture investor tax credit program, as well as other incentives.

But the special effects of heavy industry continue to drive the state's economy. In Ascension Parish, CF Industries is expanding its Donaldsonville Nitrogen Complex with a $2.1-billion capital investment that will secure nearly 700 existing jobs at and create 93 new direct jobs. The 1,400-acre (567-hectare) Mississippi River site produces anhydrous ammonia, urea and urea ammonium nitrate. With access to five major natural gas pipelines, the site can harness price and supply advantages of natural gas, a feedstock which can represent more than 70 percent of fertilizer manufacturing costs.

Among the largest investments along the Mississippi in 2012 was Mosaic's planned $700-million ammonia plant in St. James Parish, which will create 53 new jobs and retain 379 at two facilities, while also creating 1,400 construction jobs. 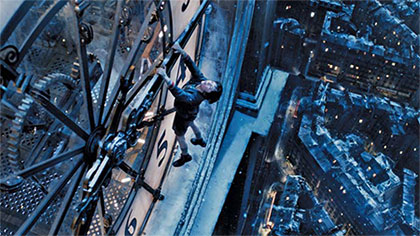