Hubs draw digerati and the employers who love them.

here's a revival going on in the Northeast as companies across the industry spectrum are discovering anew the location advantages of dense population centers in New York, New Jersey and Pennsylvania. The same urban centers that were dealt knock-out blows from Superstorm Sandy in October 2012 are picking themselves up, drying themselves out, and moving on. Firms in the midst of planned expansions or relocation to the areas hardest hit by Sandy's wrath say they haven't changed their minds about their decisions — though many are re-evaluating their contingency plans, and adding more back-up power, just in case.

Take Imperial Bag &Paper, a commercial janitorial supply firm currently based in Bayonne, N.J. Before the storm, the company had closed on a deal to consolidate three facilities into a new, 400,000-sq.-ft. (37,160-sq.-m.), state-of-the-art headquarters and distribution center in Jersey City. The disruptions in operations caused by the storm led company president Jason Tillis to rethink the energy specs of the new facility.

"We were always planning to build a generator into our new facility, allowing us to operate internally, business-as-usual, in the event of an extended power loss," he says. "Post-Sandy, we decided to increase its capacity."

Nowhere is the Northeast's urban renaissance more evident than in places like Hoboken and Jersey City, where a remarkable confluence of factors is contributing to a resurgence of these once decaying urban cores. In addition to the long-time draw of the waterfront and access to the deepwater port for distribution companies like Imperial Bag and Paper, these central business districts have new appeal for young professionals who make up Lower Manhattan's surging new media and tech work force. These digital workers have discovered lower rents, convenient mass transit and an edginess that is at the heart of cool, setting up a migration that is driving significant new residential, retail and restaurant development. 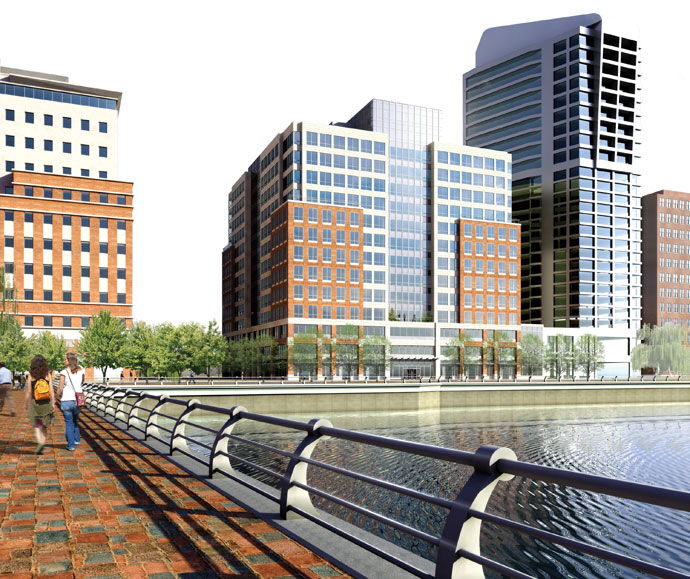 After an extensive site search throughout New York and New Jersey, Pearson opted to locate at Waterfront Corporate Center III, a green office tower rising along the banks of the Hudson River in Hoboken.

It's also driving new commercial development and location activity, as white-collar firms like Pearson look to move closer to their desired talent pool. Like many companies rooted in the publishing world, Pearson is in the midst of a transition — from publishing house to global learning company with multiple business lines that include education resources, the Financial Times group and the Penguin consumer publishing imprint. The transition hinges on the ability to attract the talent capable of creating interesting new digital service offerings, notes Wendy Spiegel, senior vice president for Pearson Communications.

With leases at several of its New York metro area facilities coming to an end, including 475,000 sq. ft. (44,128 sq. m.) of office space in Saddle River, N.J., the company understood that it had a unique opportunity to leverage facilities decisions as a key aspect of the transition strategy.

"We need tomorrow's digital skill set, and we need to be located where they live and where they want to work," says Richard Berzine, who manages Pearson's U.S. and U.K. real estate portfolio.

At first, the company considered an extreme makeover of the Saddle River space. But aside from the complexities associated with renovating functionally obsolescent space, the location itself, in the heart of suburbia, did not represent a draw for the company's desired talent pool.

"The workers we want are drawn to urban environments, where you can use mass transit, where you don't have to get in your car to go somewhere for lunch, and where you and your co-workers can walk to a restaurant or a pub to socialize after work," Berzine says.

Quickly the company realized that a more urban site would make it easier to attract top talent. After an extensive site search throughout New York and New Jersey, the company opted for a green office tower rising along the banks of the Hudson River in Hoboken. Part of an ambitious, 26-acre (10-hectare) mixed-use re-imaging of the Hoboken waterfront, the site is footsteps from the Hoboken Terminal, a major commuter transit hub and an easy drive to the Holland and Lincoln Tunnels, which connect with Manhattan. In addition to the site's transit-oriented appeal and urban vibe, the build-to-suit space gives the company the latitude to create workspaces that invite collaboration and creativity.

"This is definitely not going to be your father's cube farm," Berzine notes.

The Hoboken decision was not a slam dunk for Pearson. In fact, Berzine says, "We had one foot out the door from New Jersey to consolidate everything in lower Manhattan, where we are also building a new 750,000-squre-foot [69,675-sq.-m.] urban campus to house our New York operations."

The tipping point for Pearson's corporate real estate team was New Jersey's attractive incentives package, which could yield Pearson nearly $80 million in savings over the next 10 years, according to Berzine.

"Among the chief drivers of the surge in economic development activity in places like Jersey City and Hoboken is New Jersey's incentives program, which is unmatched," says Robert Kossar, executive managing director for Jones Lang LaSalle.

Kossar praises the administration of New Jersey Gov. Chris Christie for driving business-friendly policies and effective incentives programs. "This is an administration focused on good economic development, and it is apparent in some of the companies the state has been able to keep."

These companies include Panasonic, which reportedly cast a wide net as it considered sites for a new headquarters facility. A UTHTC incentives package worth more than $100 million over 10 years drew Panasonic to Newark, where it is building a $190-million LEED-certified office tower along the waterfront. (For the full Panasonic story, see "The Shot Heard Around the World" in the July 2011 issue of Site Selection.)

Incentives Drive Waterfront Industrial Expansion New Jersey's incentives programs also are attracting users of industrial space. Imperial Bag & Paper's Tillis says they were won over by how much New Jersey wanted them as they conducted a search throughout the New York metropolitan area, including Long Island and the Bronx.

"New York was aggressive but New Jersey was more aggressive and offered a better incentives package," Tillis says. The firm was awarded $29 million in tax credits through the Grow New Jersey program, in exchange for relocating its Bayonne operations within the state. He notes that convenient access to the Port of New York and New Jersey was an important consideration as well, since the company brings in several containers a month.

Food distributors are getting into the act as well. On-line grocer Peapod, a division of Ahold, received $35 million in UTHTC incentives for its new 375,000-sq.-ft. (34,838-sq.-m.) Jersey City distribution site, co-located in the Pulaski Distribution Center with Imperial Bag & Paper. Goya Foods will receive $82 million in UTHTC credits in exchange for keeping its operations in state and investing $127 million to build a 615,000-sq.-ft. (57,134-sq.-m.) headquarters and distribution center in Jersey City. Wakefern, which operates the ShopRite grocery stores, won $58 million in UTHTC incentives for its $90-million investment in a new 524,000-sq.-ft. (48,680-sq.-m.) warehouse in Elizabeth.

Across the river, New York City has emerged as a dominant player in the digital universe, a rise underpinned by the city's traditional strengths in publishing and media. In January 2013, Microsoft said it would take 200,000 sq. ft. (18,580 sq. m.) at 11 Times Square. Facebook opened an engineering center on Manhattan's East Side in 2012. EBay has announced plans to move its Hunch unit into the former home of the B. Altman department store in the Flatiron District. Twitter has set up shop in the city.

Google's 2.9-million-sq.-ft. (269,410-sq.-m.) building in Chelsea not only houses a growing New York work force, but is serving as a high-tech catalyst: In addition to donating office space in early 2012 for the new graduate science school being founded by Israeli university Technion and Cornell, the company in January joined with Mayor Michael Bloomberg to ceremonially cut ethernet cables as it foots the bill for free wifi for an entire section of Chelsea.

Meanwhile, as old-school Manhattan-based publishing houses transition into new media titans, they are engaged in a physical repositioning within city limits. The denizens of Midtown and Midtown South are decamping to Lower Manhattan, where the rents are much lower. "We are probably saving 30 percent by moving from Midtown to Lower Manhattan," says Pearson's Richard Berzine. Plus, there's available space — either at older, architecturally significant buildings that ooze character and are ripe for a makeover, or inside new office towers where firms have a clean slate to create 21st century worker-friendly offices.

Condé Nast is part of this shift, with plans to move out of its long-time midtown digs to 1 million sq. ft. (92,900 sq. m.) at One World Trade Center. In 2014, HarperCollins will leave its longtime headquarters at East 53rd Street and head down to 195 Broadway, a historic landmark that underwent a green retrofit in 2008 and also is home to media firm Thomson Reuters. And market research giant Nielsen is planning a move from 770 Broadway to 85 Broad Street — the former headquarters of Goldman Sachs.

Smaller digital tech firms are expanding in lower Manhattan and Brooklyn as well, to meet surging demand for digital innovation and creativity. In the last five years, more than 1,000 tech firms have started up in New York, according to a recent study by The Center for an Urban Future.


New Life On the Waterfront

ot to be outdone by other Northeastern cities in reawakening its riverfront, Allentown, Pa., is seeing two major projects take advantage of a new Neighborhood Improvement Zone along the Lehigh River, a specially designated 128-acre area of the city created by 2009 state legislation that enables developers to utilize state tax revenue from the tenants to significantly reduce occupancy costs.
City Center Lehigh Valley (above) is a mixed-use project jumpstarted by an arena being built for the Triple-A affiliate of the National Hockey League's Philadelphia Flyers. In addition to other tenants flocking to multiple office buildings at the site, in October the project welcomed the headquarters relocation of National Penn Bancshares. The Waterfront (below) is a 26-acre urban redevelopment project that will house 1 million sq. ft. of office, retail and residential buildings along with 2,800 parking spaces.