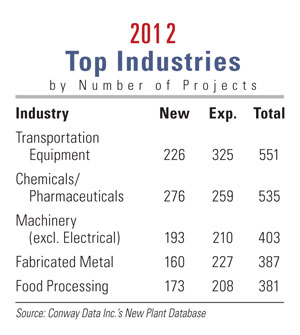 Transportation still rules the day, but chemicals are driving fast toward tomorrow.

hen nine out of the top 10 corporate facility projects in a sector are valued at more than US$1 billion, you've officially arrived as a force to be reckoned with.

That's what happened in the chemicals/pharmaceuticals sector in 2012. The sector outnumbered transportation equipment in new plants, but came in second when expansions of existing plants were included.

One of those top 10 projects is at the Celanese acetyl complex in Clear Lake, Texas, where the company last July announced its intention to construct and operate a methanol facility. Celanese produces acetic acid and vinyl acetate monomer at the Clear Lake complex, where it just finalized construction of its TCX® ethanol technology development unit. The company's global acetyl R&D center is also located at the facility. 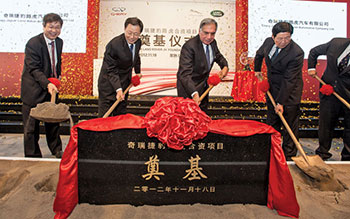 "The positive developments in the U.S. energy complex and the current and emerging natural gas surplus make it advantageous for us to produce our own methanol requirements for U.S. acetyl production," said Mark Rohr, chairman and CEO of Celanese.

Among the leading projects in the transportation equipment sector is the new $1.7-billion-plus manufacturing plant from Tata Motors' Jaguar Land Rover and China's Chery Automobile Co. Ltd. Company leaders laid the cornerstone in November 2012, about 10 days before Jaguar Land Rover opened its 100th dealership in China.

The Chery Jaguar Land Rover Automotive Company Ltd. complex in Changshu, Jiangsu province, will include an R&D center and an engine plant. Sales of Jaguar and Land Rover products rose 80 percent during the first 10 months of 2012, after rising 60 percent during 2011.

Jaguar Land Rover CEO Dr. Ralf Speth and Chery Chairman and CEO Yin Tongyao said, "We are delighted to have reached this milestone, achieved thanks to the understanding and foresight of the Chinese authorities, and we want to thank them for recognizing the potential of our joint venture in the fast-growing Chinese market."

Completion is expected during 2014.