Pictures of the Wind 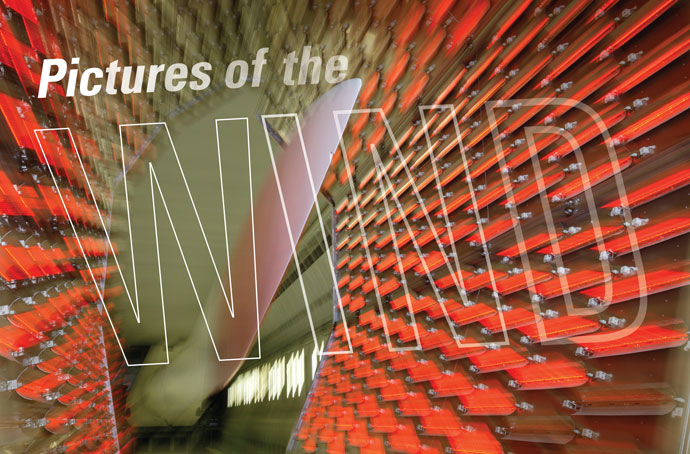 A wind turbine blade is tested in a Nordex manufacturing facility.
Photo courtesy of Nordex
by ADAM BRUNS
Industry leaders worldwide deliver their outlook for the year ahead.

The Global Wind Energy Council (GWEC) in February announced that global installed wind energy capacity increased by 19 percent in 2012 to 282,000 MW. Both China and the United States, the world's wind energy leaders, installed more than 13,000 MW of new capacity in 2012.

"While China paused for breath, both the U.S. and European markets had exceptionally strong years," said Steve Sawyer, secretary general of GWEC. "Asia still led global markets, but with North America a close second, and Europe not far behind."

The U.S. wind energy industry had its strongest year ever in 2012, as shown in the American Wind Energy Association's fourth-quarter industry numbers released in January. AWEA announced that wind power produced nearly half of the nation's new electric capacity last year, installing a record 13,124 MW of electric generating capacity, leveraging $25 billion in private investment, and achieving over 60,000 MW of cumulative wind capacity.

The record year was due in large part to impending expiration of the successful federal Production Tax Credit, wind power's primary policy driver, which has fostered strong economic development in all 50 states and in communities across the country. It was slated to end on December 31, 2012, but was extended by Congress on January 1, 2013, as part of the "fiscal cliff package," the American Taxpayer Relief Act of 2012. Thus, a key policy mechanism remains in place for the industry to keep building projects for America. 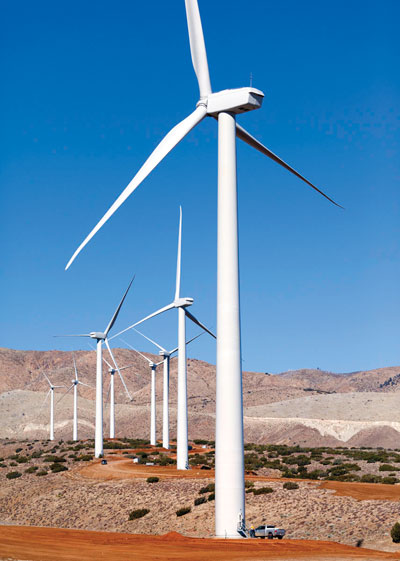 Iberdrola Renewables added three new wind farms to its U.S. fleet at the end of 2012, adding to a portfolio of projects that now spans 19 states. The three farms, including the Manzana project in Kern Co., Calif. (pictured) all reached commercial operation in December, and represent a total investment of approximately $700 million.
Photo courtesy of Iberdrola

Wind energy is a key vehicle on America's road to economic recovery. Wind power has added a brand new manufacturing sector that stretches across nearly 500 facilities in 44 states. American wind power now supports thousands of well-paying jobs, and is capable of growing to support many more.

The U.S. Department of Energy has found that with the right policies in place, wind power could grow to supply 20 percent of the nation's energy supply by 2030 and support roughly 500,000 American jobs, with an annual average of more than 150,000 workers employed directly. U.S. wind developers are ahead of schedule to produce 20 percent of America's electricity by 2030.

And wind energy is increasingly "made in the USA" — over 70 percent of a wind turbine's value is now American-made, further bringing down costs by avoiding overseas shipping of these large components and playing a significant role in America's manufacturing renaissance.

The U.S. Department of Energy has identified transmission limitations as a principal obstacle to realizing the economic, environmental, and energy-security benefits of obtaining 20 percent of our electricity from wind power. Transmission is currently being developed in the U.S. that would connect approximately 50,000 MW of additional wind energy capacity.

An expanded grid will allow plentiful domestic sources of renewable energy to be put to use powering our homes and even our vehicles, reducing our fossil-fuel dependence as well as energy prices. We are also pushing to update grid-operating practices to use the current power system more efficiently, which will also yield major savings for consumers and all users of the power grid.

Given all the potential benefits of wind energy development, the wind industry's impacts should be considered in context with other forms of energy production and treated accordingly during the policy-making process.

Fortunately, decision-makers around the country are increasingly understanding how sound policy can foster the economic power of wind. Beyond federal policy, a host of states understand the many economic and clean-energy benefits of wind power and have put in place sound policy mechanisms that are driving the market and allowing them to tap those benefits.

Generally, policies that are attracting wind power project activity at the state level relate to renewables targets, taxes and, not surprisingly, transmission. Texas is the leading wind power state for total capacity, and strong project development activity continues there. That's thanks to a host of sound policies, starting with a renewable portfolio standard that's been in place for over a dozen years, a strong transmission policy known as CREZ (Competitive Renewable Energy Zones) that fosters the development of transmission from wind-rich rural areas, and supportive tax incentives.

Another state known for its oil-and-gas industry, Oklahoma, also has seen significant wind power project activity in recent years. Again, the state is tapping wind's economic power in part as a result of a renewable energy goal and effective tax policies, in addition to its membership in the Southwest Power Pool, which has sound transmission and interconnection policies.

Meanwhile, in Ohio, an effective tax policy known as the PILOT provision has sparked a wind power boom there. States tapping the potent combination of a renewables target and a sound renewables tax policy can be found out West as well. Count Washington in the category of states that are using such policies and enjoying wind power industry growth as a result.

These are exciting times for the wind industry, and times of great challenge as well. All of us in the energy sector are adapting to changes in the economy, in the political establishment and in the regulatory environment, and the experience and dedication we share will serve us well in the coming years. We are not only building new models for business success. We are helping to shape a new paradigm for meeting America's energy needs and addressing the threat of climate change. The best days for American wind power are still ahead. 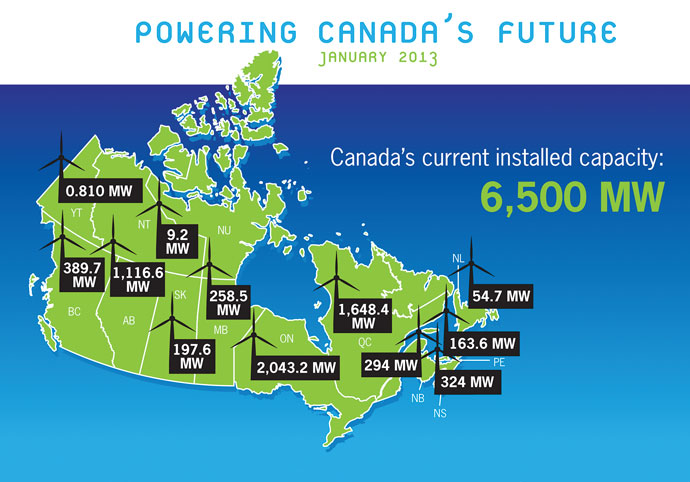 Canada's installed wind energy capacity has ballooned from just 322 MW a decade ago. 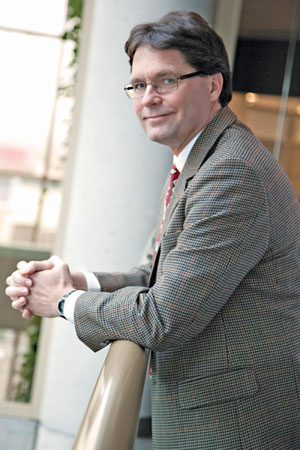 Close to 40 per cent of Canada's new wind energy capacity in 2012 was installed in Quebec, while Ontario continues to lead the country with over 2,000 MW of installed wind energy capacity now in place. This past year also saw some important firsts for wind in Canada. For example, the Diavik Mine began operating the first wind farm in the Northwest Territories: a 9.2-MW wind project to help significantly reduce reliance on diesel fuel. In Ontario, the M'Chigeeng First Nation commissioned the first wind farm to be 100-percent community and First Nation owned.

Growth will continue with a new record for annual installations likely to be set in 2013. Indeed Canada is on track to reach 12,000 MW of total installed capacity by 2016, pumping $16 billion and 68,000 new person-years of employment into the economy.

This significant contribution to Canadian productivity will see an average of 1,500 MW of new wind energy installations commissioned annually for the next several years. The wind energy community in Canada remains firmly committed to meeting the Canadian Wind Energy Association's WindVision 2025 — our goal to have wind supplying 20 percent of the country's electricity by 2025.

The cost to build wind energy continues to decline in Canada, while at the same time significant efficiency gains are being realized in technology and siting of projects. There have been dramatic drops in cost over the past three years alone. A 2012 GL Garrad Hassan study found that, since 2009, the average unit energy cost to produce electricity with wind energy resources in the province of British Columbia has dropped by 33 percent. Today, wind energy is cost-competitive with small hydro, a significant portion of new large hydro, coal with carbon capture and storage, nuclear power and other sources of renewable energy.

Wind energy's cost-competitiveness, coupled with its environmental performance and distribution of economic benefits to rural communities across Canada, ensures that it will remain an electricity source of choice as Canada continues to plan to meet the electricity demand of the future.


Germany the Clear Leader in Europe

he European Wind Energy Association hosted its annual conference in Vienna Feb. 4-7. On Feb. 8, it released its annual statistics from 2012. The EU wind energy sector installed 11.6 gigawatts (GW) of capacity in 2012, a 23-percent jump from 2011. But that wasn't necessarily a cause for optimism from EWEA.

"The 2012 figures reflect orders made before the wave of political uncertainty that has swept across Europe since 2011, which is having a hugely negative impact on the wind energy sector," said Christian Kjaer, CEO of EWEA. "We expect this instability to be far more apparent in 2013 and 2014 installation levels."

Wind energy represented 26 percent of all new EU power capacity installed last year, and investments of between €2.8 billion and €17.2 billion. It is now meeting 7 percent of Europe's electricity demand.

Here are the leaders in 2012 in wind energy installations:

The rise of Eastern Europe was noted in a December 2012 report from the World Wind Energy Association about the status of wind power in Russia and all CIS countries, which found the CIS countries "are representing a world region with huge wind potentials, but where so far wind energy plays only a marginal role: The total wind installations have only reached 178 MW, a very small share of the global wind capacity of 254,000 MW (as of June 2012)."

"The spread of wind energy across Europe is shown by the fact that Denmark, Germany and Spain represented 33 percent of annual wind power installations in the EU in 2012," said the EWEA report, "down from 85 percent in 2000."  — Adam Bruns

Hornsea is one of nine zones being developed in the seas around Great Britain as part of The Crown Estate's Round 3 program. Mainstream Renewable Power and Siemens Project Ventures formed SMart Wind in 2009 to deliver the zone into operation by 2020. DONG Energy, based in Denmark, acquired a one-third stake in the Heron Wind and Njord Offshore Wind Farms (pictured) being developed by SMart Wind.
Images courtesy of Smart Wind and DONG Energy 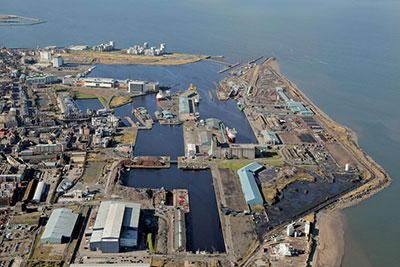 Photo courtesy of Forth Ports
S

panish wind turbine manufacturer and wind farm developer Gamesa announced in March 2012 a memorandum of understanding with the Port of Leith (pictured) for a €150-million investment in a new wind turbine manufacturing plant at the port in Edinburgh, Scotland, one of six ports managed by Forth Ports Ltd. The project could create more than 800 direct jobs. The project is just one part of a growing Scottish base for offshore wind that has seen similar MOUs signed by Areva (also in Edinburgh), Mitsubishi (Dundee) and Samsung (Methil, in Fife). Plans call for up to 10 GW of offshore wind in Scotland.

Gamesa in 2012 also opened a new €25-million blade manufacturing plant in Vadodara, Gujarat, India, part of a €60-million investment plan for India, announced in 2011, that will also include a new nacelle plant in Tamil Nadu state.

Gamesa also has been constructing its second office building at the City of Innovation in Sarriguren, Egües, Navarre, Spain. Located at the Navarre City of Innovation Technology Park, the new structure will consist of more than 10,000 sq. m. (107,643 sq. ft.) of office space spread over six floors. Gamesa planned to move into the new building in the second half of 2012, with Sarriguren I and II designed to host 1,600 total employees.

In 2011, Gamesa opened a new technology center in Singapore, where it immediately began work on three research projects jointly conducted with Nanyang Technological University, the National University of Singapore and the Agency for Science, Technology and Research (A*STAR). Gamesa expects the tech lab to employ more than 30 engineers by 2014. — Adam Bruns