The Shifting Landscape of
Business Incentives in Europe
New EU incentives rules will likely be stricter and favor
smaller companies in the Continent’s less developed regions. overnment financial support for corporate facility investment and expansion continues to be a common practice in most parts of the world. For the right project, economic development agencies in many parts of North America and Asia can be remarkably flexible and creative in structuring an attractive incentives package. When companies from these regions invest in Europe, they are often surprised when support from European economic development agencies is not as forthcoming. This should not be interpreted as a lack of interest. European agencies are as eager to attract investment as their counterparts in other regions, but in most cases they are simply more constrained in their ability to provide incentives.

At first glance, the system for securing government incentives in Europe looks simple. As in most aspects of Europe's economy, the European Commission (EC) in Brussels plays an important role. The EC sets ceilings called the "maximum aid intensity" for the level of incentives that can be provided in any part of Europe. These ceilings are based on the average GDP in each region, which means that the less affluent areas of Europe have higher ceilings whereas in the more prosperous parts of Europe the ceiling is often zero, meaning that no incentives are allowed. A map published by the EC clearly shows which ceilings apply throughout Europe. The ceilings can also differ based on the size of the company and the size of the project. The ceilings are expressed as a percentage of either a project's capital expenditure or the payroll of any new employment generated by a project in the first two years. In other words, a maximum aid intensity of 25 percent in a certain region means that the sum of all of the incentives provided to a company investing in that region cannot exceed 25 percent of the project's capital expenditure or 25 percent of the first two years' payroll.

While this may sound straightforward, it is only the start. Individual countries and regions are free to interpret the rules as they wish, as long as they do not exceed the ceilings or offer support that otherwise contravenes EC rules. As a result, different countries and regions have their own programs, reflecting their own economic development priorities and sources of funding. The result is a bewildering number of programs, each with their own eligibility requirements, application and compliance procedures and administering bodies.

The ability of countries and regions to make their own rules within the EC framework means that companies investing in an area with a high incentives ceiling are not necessarily entitled to the maximum level of support. The amount of incentives will depend on the specific programs in place in that location, and there is no guarantee that a particular project will be eligible for the programs that exist or that funding is even available. 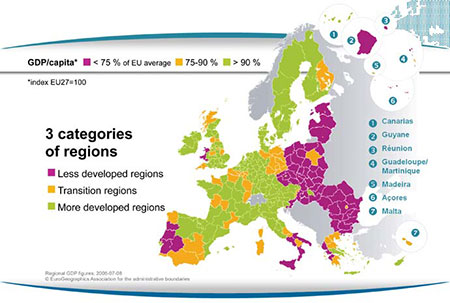 Many of the incentives programs in Europe are comparable to those in the US, with performance requirements based on job creation and capital expenditure as well as clawback provisions that govern what happens if a company does not fulfill its obligations. A big difference in Europe is that there are comparatively few tax incentives, as the European Commission considers "fiscal state aid" to be harmful and therefore prohibits it in most cases. Exceptions do exist, such as the "Special Economic Zones" in Poland as well as attractive R&D tax credit programs in several European countries. However, the opportunity for companies to negotiate and secure a "good deal" in Europe is severely curtailed. The restrictions imposed by the EC should not be taken lightly as any infringement can result in legal action and penalties. The EC investigates dozens of incentives agreements a year and companies found to have breached the rules are often forced to pay back the money received.

The Commission revises the system every seven years to reflect economic changes in the EU. The current system has been in place since 2007 and expires at the end of 2013, when new rules come into effect that will last until 2020. These rules are still being drafted, which is a major issue for agencies throughout Europe for whom incentives continue to be an important tool for attracting investment. The process of changing the regulations therefore involves extensive negotiations between the EC and the European Union member states and regions. This process is currently in its final phases, and the Commission expects to finalize the new rules — after still more negotiation — by the middle of 2013.

Although the draft rules have not yet been released, a few recent speeches on the topic by Joaquín Almunia, Vice President of the European Commission responsible for Competition Policy, provide some clues about what to expect. In general, the rules governing the use of incentives are likely to become stricter and weighted toward Europe's poorest (or "less developed") regions. A map published by the EC shows that these regions are primarily located on the periphery of the European Union, with most of them in the EU's new member states in Central and Eastern Europe.

This geographic focus was made very clear by Mr. Almunia in a published speech held on October 11, 2012. According to Almunia, "government support should focus where it has the most potential to make a difference, helping the poorest regions to narrow their gap with the EU average."

The new rules are also likely to favor smaller companies. The EC has always had a critical view of support for larger companies, and incentives for large companies and investments are already subject to lower ceilings, rigorous application procedures and more intense scrutiny. It looks as though the EC may be planning to reduce the amount of support that can be received by large companies, particularly in the more prosperous parts of Europe.

Finally, the "but for" test that also exists in the US will be applied more rigorously. In the same speech, Mr. Almunia stated that government support "can be considered compatible only if it gives an incentive to decide to invest in an assisted region or if it can determine the location of an investment … we will not approve windfall benefits for companies that would have invested in the assisted region even without the aid."

These changes may have significant implications for some regions. Germany, for example, has made extensive use of generous cash grants to attract investment to its less affluent eastern states (the former communist part of the country). It remains to be seen how the region will fare in the competition for investment if, as anticipated, its ability to provide grants will be curtailed. Dr. Robert Hermann, the Managing Director of Investor Consulting at Germany Trade & Invest (the economic development agency of the Federal Republic of Germany), remarks, "It is still unclear what exactly the regulations for investments grants will look like after 2013. However, Germany has already been diversifying its incentives programs for a number of years and will continue to provide tailored support to companies in important areas such as work-force training and R&D."

“It is still unclear what exactly the regulations for investments grants will look like after 2013.”

Hermann acknowledges that incentives have been an important tool for attracting investment to Germany's eastern states, but he believes that even with possible reductions in the grant ceilings this region will remain a very attractive location. "Grants are not the major driver of investments to the east, and we find that companies are even more interested in market potential or the availability of skilled employees."

All of this is of little concern to European countries who are not EU members. In principle, these countries are free to do anything they want to entice investors. Serbia, for example, has a generous and transparent incentive system that includes cash grants for each new job created as well as other benefits such as tax reductions and free land for greenfield investments. Countries such as Serbia or Croatia may have to adapt their programs as part of negotiations to become EU members, but for the time being they have more flexibility than their EU neighbors.

What it Means for Investors

What do these rules and changes mean for companies that are considering investment in Europe?

Incentives do exist in Europe, and they can be quite lucrative. However, the process of securing them is different from other parts of the world. It requires research up front to identify relevant programs and opportunities rather than starting discussions with agencies immediately. "Negotiations" should only begin once the company has done its own due diligence and is better able to position its project based on the eligibility requirements of specific programs in a particular part of Europe.

Investing in regions with a high "maximum aid intensity" does not automatically imply higher benefits. Again, companies should do their homework to determine whether the countries and regions they are considering have any programs or funds that match the planned investment.

There is a 12-month window for companies to secure incentives under the current rules. Companies considering a new investment or expansion in Europe should use this window and perhaps accelerate projects that were planned for 2014 or later. Large companies in particular should be wary that new rules in place from 2014 may not be in their favor. Programs are already being phased out in some countries so companies should not wait until the end of 2013 before applying under the current rules.

Andreas Dressler is Managing Director of Terrain, a foreign direct investment (FDI) advisory firm based in Berlin, Germany. He can be reached at ad@terrain-global.com.