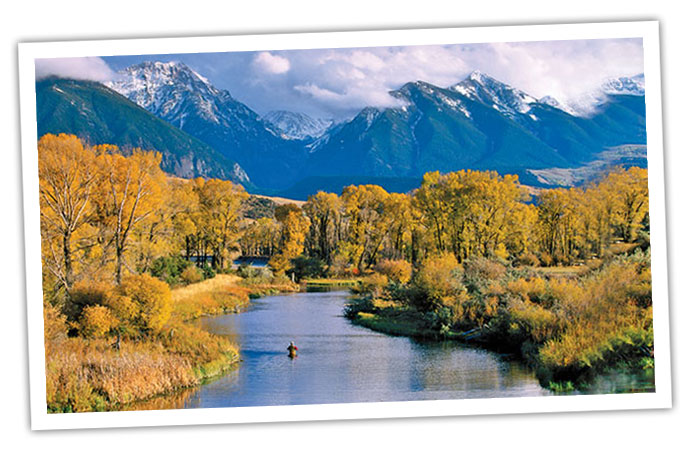 Montana rates high on multiple indices of well-being and living out the American Dream.
Photo courtesy of the Montana Office of Tourism
by ED BURGHARD
O

In business, accountability is critical to success. CEOs know lack of measurable accountability in the workplace has consequences that can negatively affect people and shareholder return. But CEOs also know you can't hold somebody accountable for something they can't directly impact.

Traditionally, success in economic development has been measured by job growth in a community, region or state. But the fact is neither EDOs nor elected officials directly impact job creation. Employers do. Holding either EDOs or elected officials accountable for job creation is not appropriate. And it can lead to unintended negative behavior such as the misuse of incentive packages to entice companies to move across state borders.

So what is appropriate to hold EDOs and elected officials accountable for? And if it isn't job growth, how do you measure it?

The answer is to hold them measurably accountable for creating the conditions in their community, region or state so people can better live the American Dream.

EDOs and elected officials play a direct role in developing and deploying strategies that either enable or hinder people's ability to achieve their personal definition of the American Dream. They do this through the choices made in local asset creation, infrastructure investment and public policy. Job growth is not the best measure of the impact of those choices.

New Mexico ranks No. 2 on the ADCI list of best states. Photo by Thomas Shahan

The five sub-indexes are:

Economic Index — a measure of one's satisfaction, freedom, and progress with respect to finances, job, home ownership and health care.

Well-Being Index — a measure of the extent of one's contentment, health and prosperity in life.

Societal Index — a measure of the extent to which the government, businesses, and people are fair and trustworthy.

Diversity Index — a measure of the attitudes toward assimilation of differences.

Environmental Index — a measure of the extent of pollution in the air, food, water and land one encounters on a regular basis.

Xavier University recently completed a data mining study of survey responses from January 2012 through December 2012. The data represent the outlook of people living in each state. The results are presented in the 2012 American Dream State Ranking Report, which can be downloaded at http://strengtheningbrandamerica.com/living-the-american-dream/#.

Economic development professionals and elected officials can use the data to compare the performance of their states versus national average and other states. Comparisons will uncover advantages and disadvantages to be used as important insight into how to better enable people to live the American Dream in their states. 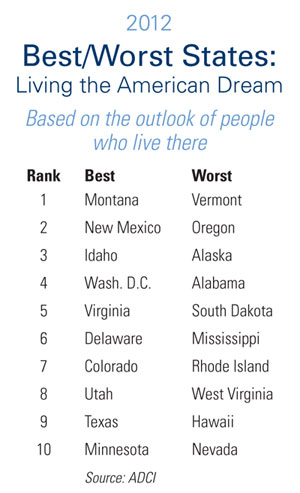 To validate the importance of the ADCI in site selection, a separate survey of business executives was run. Fully 87 percent of executives responding wanted to know the ADCI score for the locations where their employees work and live. Nearly 90 percent of executives felt there was a business benefit to employees feeling they are achieving the American Dream. The top three benefits were seen as "increased employee retention" (75 percent); "better work-life balance" (73 percent); and "increased productivity" (72 percent).

Executives were also given two scenarios to consider.

The first scenario was the choice between two locations that successfully passed due diligence. Nearly 64 percent indicated they would be somewhere between "likely" and "highly likely" to select the location with the higher ADCI score.

The second scenario focused on the situation of a competing location with a lower ADCI score offering an incentive package to induce relocation. Nearly a third (31 percent) of executives indicated they would be between "unlikely" and "highly unlikely" to consider the offer.

The ADCI survey is a unique and robust measure of American sentiment. It is the culmination of over three years of research by Xavier University on the American Dream. The ADCI is the only statistically validated measure of that Dream. You can find further details on the survey and validation methodology by visiting the Xavier University Williams College of Business website: http://www.americandreamcompositeindex.com/methodology. 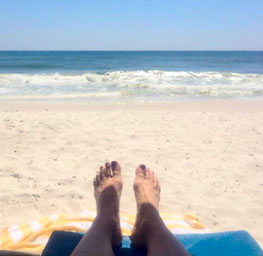 Earlier this year the "2012 State of Well-Being" report was released by the Gallup-Healthways Well-Being Index (WBI), based on real-time daily well-being data collected from 1,000 interviews a day over the course of 2012 across six sub-indices: Life Evaluation, Physical Health, Emotional Health, Healthy Behavior, Work Environment and Basic Access. Over five years, the WBI has garnered the opinions of more than 1.7 million people.

Below are the top states for well-being for 2012. Four of these top 10 are also represented in the American Dream Composite Index™: Colorado, Minnesota, Utah and Montana. Curiously, two of the ADCI's worst states — Hawaii and Vermont — are No. 1 and No. 5 on WBI's list. For more, visit well-beingindex.com.

To help illustrate the value of the ADCI data for state-level strategic planning, The Burghard Group is publishing a series of case studies comparing the relative advantages and disadvantages between specific state pairs. Disadvantages represent opportunities for EDOs and elected officials to remove barriers to achieving the American Dream. These case studies can be found at the Strengthening Brand America website: http://strengtheningbrandamerica.com/living-the-american-dream/#.

The ADCI study clearly demonstrates the American Dream is about more than job growth. The best states create the conditions for people to achieve what they strive for, work for and wish for. Holding economic development professionals and elected officials accountable for improving the state's ADCI score will ensure the conditions for everybody to achieve the American Dream are created. For some people living in the state, that may in fact mean having the opportunity to be productively employed. But for others it may mean having access to a quality education or the opportunity for a long and personally fulfilling retirement. 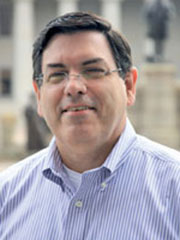 Ed Burghard, creator of the Strengthening Brand America Project, is CEO and Manager of The Burghard Group LLC.

Because the ADCI score reflects the sentiment of people living in a state, measuring economic development professionals and elected officials on the relative performance versus other states makes them accountable to the people.

It is important to note the ADCI research reports on what people are feeling, but not why. Economic development professionals and elected officials will need to invest in state-level market research to better understand the emotional drivers behind the scores. Such insights will lead to better investment and policy choices that, in turn, will help companies realize the bottom-line business benefits of their employees feeling they are achieving the American Dream.