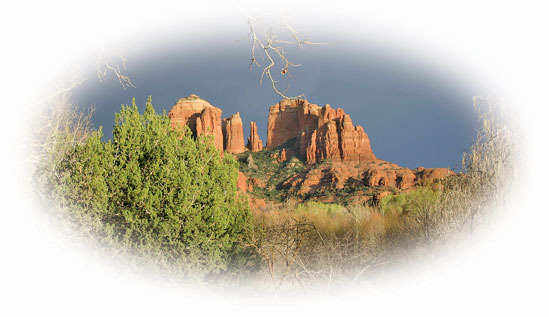 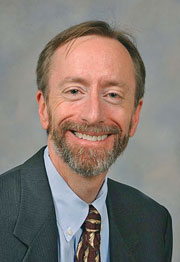 Dr. George Hammond
he following is excerpted with permission from Dr. George Hammond's March 2013 report in Arizona's Economy, a publication of the Economic and Business Research Center (EBR) at the Eller College of Management, University of Arizona. Dr. Hammond is Associate Director of EBR and Eller Research Professor.

The Arizona economy accelerated in 2012, with stronger job, population, and housing permit growth than in 2011. Job gains in 2012 were driven, as usual, by service-providing sectors. However, the goods-producing sector contributed to growth as well, with gains in construction, manufacturing and mining and logging.

Job growth contributed to a decline in the state unemployment rate to 8.2 percent, down from 9.5 percent in 2011. However, a declining labor force was also a significant factor in the drop.

With the worst of the fiscal cliff either avoided or delayed and a full-blown Eurozone financial crisis looking more remote, the U.S. and Arizona economies are expected to pick up some speed as we make our way through 2013. Even faster growth should be in the offing for 2014-2015, as the housing sector rebound gains momentum.

The forecast calls for the U.S. economy to gradually pick up steam through 2013 and into 2014, although gains are particularly weak during the first quarter of this year. The January 2013 IHS Global Insight forecasts calls for real GDP growth to be just 1.0 percent in the first quarter, with faster gains expected for the remainder of the year. On average for 2013, real GDP is expected rise just 1.7 percent, another disappointing result. In 2014, growth accelerates to 2.7 percent and then gains momentum, hitting 3.4 percent in 2015.

Arizona added 50,500 jobs in 2012, which translated into an annual growth rate of 2.1 percent, according to the latest estimates. That was faster than growth in 2011, of 1.0 percent, and also exceeded the national rate of growth of 1.7 percent. As Exhibit 1 shows, job growth was fairly well balanced across industries, with just two sectors posting job losses during the year: information (down 400 jobs) and other services (down 1,800 jobs).

The service-providing sectors accounted for 83.0 percent of net job gains in Arizona last year, but the goods-producing sectors contributed as well. Construction jobs bounced back strongly in 2012, adding nearly 7,000 jobs. This is a welcome change from the 128,800 jobs lost during the 2006-2010 period. Even manufacturing contributed to job growth last year, adding 1,600 jobs from 2011, with roughly equal gains in durable and nondurable goods production. Mining and logging employment was up slightly last year.

Job growth also accelerated in the Phoenix MSA in 2012, with job growth rising from 1.4 percent in 2011 to 2.5 percent in 2012. Thus, Phoenix job growth last year beat both the state and the nation. Job growth was slower in the Tucson MSA last year, with employment rising by just 0.6 percent. Even so, that was a marked improvement over results for 2011, when the metropolitan area posted just 0.1 percent job growth.

The state unemployment rate hit 8.2 percent in 2012, according to preliminary estimates, which left the state very close to the national rate and well below the state rate in 2011 (9.5 percent). This news is not as good as we would hope because the state posted labor force declines during the period. The Phoenix MSA rate was 7.2 percent in 2012, down from 2011 and well below the state rate. The Tucson MSA unemployment rate also fell in 2012 to 7.3 percent. The metropolitan areas also experienced labor force declines in 2012, according to the preliminary estimates.

The Arizona Office of Employment and Population Statistics has released mid-year population estimates for the state, shown in Exhibit 2. The estimates suggest that Arizona's population expanded by 60,400 (0.9 percent) in 2012 to nearly 6.5 million residents. That was stronger growth than the state generated in 2011, at 0.6 percent. Natural increase was positive in 2012, at 37,200, but a bit slower than in 2011. Net migration is estimated to have increased strongly in 2012, to 23,200, far exceeding the small decline in 2011. 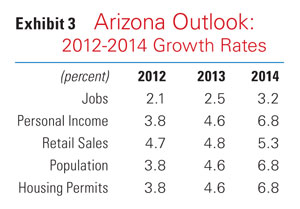 Both the Phoenix and Tucson MSAs added residents in 2012, with population rising by 1.1 percent in Phoenix, which was a significant acceleration over the 2011 growth rate of 0.6 percent. Population growth in Tucson was 0.4 percent in 2012, slightly slower than the 0.5 percent rate posted in 2011.

Arizona is on track to generate faster growth, assuming the U.S. economy continues to expand. For most major indicators, growth accelerates in 2013 and again in 2014, as population growth and the housing market gain momentum. Overall, Arizona is forecast to grow during the next two years and to grow faster than the nation.