At the commissioning of the wind turbine project at SC Johnson's Waxdale manufacturing facility in Mount Pleasant, Wis., Fisk Johnson, chairman and CEO, shares his excitement for the powering up of the wind turbines for the first time. The company aims to increase worldwide renewable energy use to 44 percent of total electricity by 2016.
Photo courtesy of SC Johnson
by ADAM BRUNS
E

nergy efficiency tweaks such as new HVAC systems and long-life light bulbs offer tremendous and quick gains, but they only get you so far. Sooner or later, as technology advances along with a company's sustainability mandate, the search for that magic energy solution takes some corporate end users right to the power generation sources themselves.

How do on-site projects affect corporate real estate and facilities management? What are the byproducts, the cost savings and, perhaps, the models for replication at other sites?

Two companies based in Wisconsin have some ideas.

In February, SC Johnson, the manufacturer behind such brand-name products as Pledge, Glade and Windex, announced it had received a Climate Leadership Award from the EPA, the Association of Climate Change Officers, the Center for Climate and Energy Solutions and The Climate Registry for aggressive goal setting in reducing greenhouse gas (GHG) emissions.

"In addition to the 27-percent reduction we've achieved versus our 2005 U.S. baseline, we will continue to raise the bar and hold ourselves accountable," said Fisk Johnson, chairman and CEO of SC Johnson. "By 2016, we plan to further reduce our greenhouse gas emissions by an additional 7-percent absolute reduction, and we're honored to be recognized for setting this goal."

Setting goals is one thing. Achieving them is another. But for SC Johnson, sustainability has been fundamental to operations for a long time. Clean energy initiatives from right next door and around the world demonstrate the company's commitment to reducing its environmental footprint:

The other Wisconsin company leading the way in on-site power is Kohl's, whose 3,000-job headquarters retention and expansion last year is among the Honorable Mention Top Deals of 2012 recognized elsewhere in this issue.

Winner of a Sustained Excellence award from the EPA's 2013 Energy Start Partner of the Year program, Kohl's has moved beyond hundreds of lighting retrofits and other energy efficiency improvements. The company has expanded its solar program by installing panels at 16 new locations in 2012 after doing so at 20 locations in 2011. It also activated its largest array of solar panels at its 1-million-sq.-ft. e-commerce distribution center in Edgewood, Md. To date, Kohl's has more than 130 solar locations in 12 states, and is one of the largest single hosts of solar electricity production in North America. Kohl's solar portfolio now totals nearly 42 MW, generating more than 57,400 Megawatt-hours (MWh) of electricity annually.

Kohl's also purchased more than 1.5 billion kWh of green power in 2012, enough to offset more than 100 percent of the company's purchased electricity use for the third consecutive year. The company ranks first in retail and second overall on EPA's quarterly rankings of top green power purchasers.

The LEED-Gold Edgewood facility opened in 2011 and launched its solar plant in Dec. 2012. The 2.4-MW, 8,360-panel rooftop solar array will generate more than 3 million kWh of electricity annually and provide more than 40 percent of the facility's energy. Until this project, Kohl's largest solar site was its San Bernardino, Calif., distribution center with a 1-MW, 6,208-panel rooftop solar array. The Edgewood installation is the company's sixth solar site in Maryland, and the facility itself is the company's first LEED-certified logistics complex.

"The Edgewood facility demonstrates Kohl's collective approach to environmental responsibility in many ways, including our commitment to collaboration with our partners and expanding our successful programs such as solar and LEED certification," said John Worthington, Kohl's chief administrative officer, in December. "We worked with experts internally and externally to maximize the sustainable aspects of this site, which ranged from expanding onto and retrofitting an existing building structure to addressing the nature of the distribution center as an industrial, round-the-clock facility with different operational considerations than what our stores may have. We are very pleased with the results and look forward to carrying forward what we have learned into future building and LEED projects."

In April Kohl's released its 2012 corporate social responsibility (CSR) report. Among the achievements as of the end of fiscal 2012, Kohl's operated 137 solar arrays at stores and corporate facilities, including the 16 new locations added in 2012. Kohl's aims to have 200 active solar arrays by 2015. It's also set a goal as a member of the U.S. Department of Energy's Better Buildings Challenge to reduce energy use by 20 percent in more than 112 million sq. ft. (10.4 million sq. m.) of occupied building space by 2020.

The company has 13 facilities in its distribution center portfolio, including other e-commerce fulfillment centers in Monroe, Ohio, and, as of last year, in DeSoto, Texas, where the company aims to create approximately 400 jobs over the next few years. 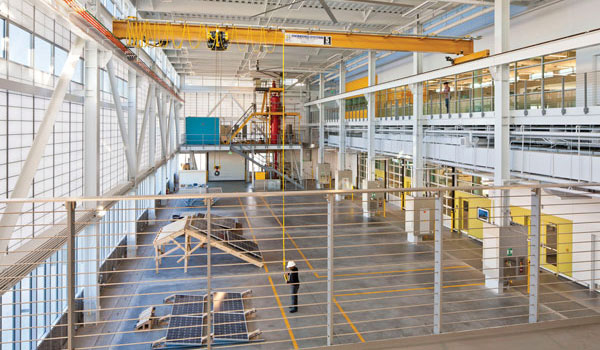 As companies look for on-site power generation solutions, they may one day look to the HDR-designed Carbon-Neutral Energy Solutions Laboratory (CNES) at the Georgia Institute of Technology in Atlanta, which recently was awarded High Honors in R&D Magazine's 2013 Lab of the Year competition. The 42,000-sq.-ft. (3,902-sq.-m.) lab allows project-based experiments to be rapidly modified in a non-traditional environment.

The lab is a center for research dedicated to carbon-neutral energy conversion technologies including combustion, gasification, biochemical-enzymatic conversion of biomass and carbon dioxide capture. It's also a research project in itself, focused on carbon-neutral energy. Its energy strategies have been well documented and are being tracked by Georgia Tech's CNES dashboard, located in the building lobby. The lab design resulted in a building that is 80 percent more efficient than the initial baseline energy model, 26 percent of which resulted from the intense use of photovoltaic panels.


Bright Tidings in the Valley 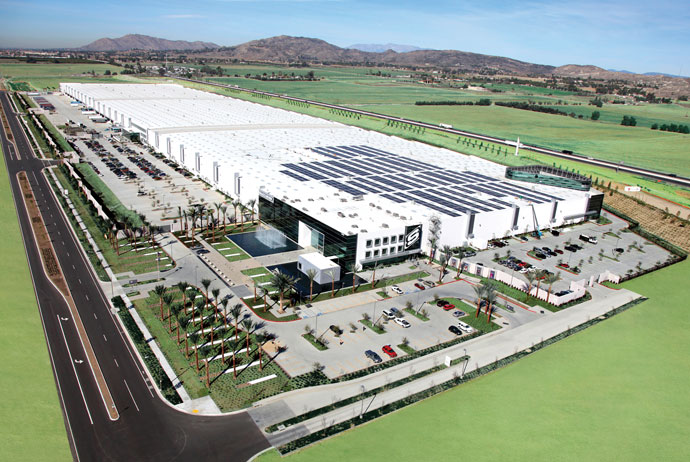 In March the City of Moreno Valley, Calif., announced that Skechers USA's North American Distribution Center in Moreno Valley had been certified LEED Gold by the U.S. Green Building Council. The 1,820,457-sq.-ft. (169,120-sq.-m.) building at Rancho Belago, developed by Highland Fairview, is the largest LEED-Gold project of its kind in the U.S. The center, which serves as the company's North American distribution headquarters, incorporates Highland Fairview's "Complete Life Cycle" approach to sustainable development, which includes advanced solar power generation systems.

Wilsonart, a manufacturer and distributor of High Pressure Laminates and other engineered decorative surfacing materials and components based in Temple, Texas, has worked with TXU Energy on energy efficiency upgrades. Asked about the potential for on-site power generation, Dan Case, manager of engineering and real estate for North America at Wilsonart, says, "We are looking at that quite actively," aided in part by new software.

"Just yesterday, I participated in a webinar from the U.S. Department of Energy that was talking about combined heat and power [CHP]," he says. "We're evaluating the feasability of that relative to our operations. We certainly have our eye on solar — in Texas, we have 13 acres of roof. We've considered some biomass relative to the local landfill, but there were some logistical hurdles."

"If you look at Texas, pricing right now from a kilowatt-hour perspective is fairly inexpensive compared to other parts of the country," says Scott Harrison, director of engineering and innovation for TXU Energy. "But Texas is still one of the biggest combined heat and power areas," in part because of the heavy concentration of industrial facilities on the shipping channel near Houston.

Most requests focus on solar and wind. Harrison says TXU might as well help. "They might produce 50 percent of their generation out of that cogen facility, and we lose part of that load," he says, "but we have the other half. We will encourage our customers to do it."

In other words, even where energy is more affordable, end users are affording on-site power generation a closer look.