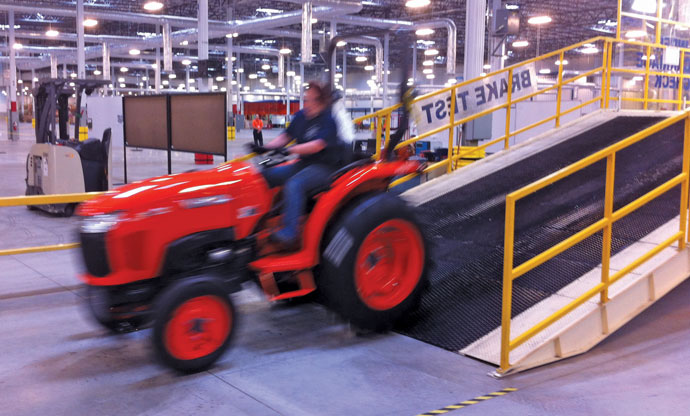 An employee drives a brand-new Kubota L-series tractor down the test ramp at the Japanese company's brand-new plant in Jackson County, Ga. The 522,000-sq.-ft. assembly plant in Jefferson in Northeast Georgia cements a 40-year relationship that Kubota has had with the Peach State.
Photo by Ron Starner
by RON STARNER
E

very time a new Kubota compact tractor speeds off the assembly line in Jefferson, Ga., it's a reminder of just how multinational commerce has become in the Peach State.

One of the first large Japanese investors in Georgia, Kubota cemented its 40-year relationship with the state April 8 when it celebrated the grand opening of its new $73-million, 200-job production facility in Jefferson in Jackson County about an hour northeast of Atlanta.

Between its facilities in Gainesville and Jefferson, Kubota has invested more than $400 million and employed more than 1,700 workers in Georgia in the manufacturing of compact and subcompact tractors, riding mowers, utility vehicles, and various attachments and implements such as loaders, backhoes and mowers.

Kubota's total footprint of manufacturing and assembly space in the state now reaches 2.2 million sq. ft. (204,380 sq. m.). "We are committed to making investments that will enable us to grow our business to meet the strong demand for Kubota tractors here in the U.S.," Kubota added.

Gov. Nathan Deal says the new Kubota factory is the latest chapter in Georgia's ongoing efforts to attract more foreign direct investment. "Forty years ago, the governor of Georgia had the foresight to establish the first state trade office in Japan," Deal said at the Kubota ceremony in April. "We have seen the fruits of that labor come to pass."

Brian Arnold, chief manufacturing officer of Kubota Manufacturing of America, says that the new plant, which is planned to produce 22,000 units per year at capacity, will be one of the most technologically advanced tractor assembly facilities on the planet.

"Our painting system is the best in the industry. Over 100,000 hours have been put into developing, perfecting and installing this proprietary process," Arnold says. "Quality inspectors record their findings on iPads for real-time feedback to the workers on the assembly line, and our high-tech water recycling process saves 5.4 million gallons of water a year at this plant alone." 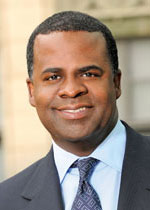 "We are working to become the logistics hub for the Western Hemisphere. If anyone wants to know what our goal is, that's what it is."
— Atlanta Mayor Kasim Reed

Arnold says Kubota initially conducted a nationwide search before choosing Gainesville to be the company's North American headquarters in 1988. KIE was then established in Jefferson in 2005 with a $50-million plant investment.

"It made the most sense to build our new plant in Jefferson so that we could be close to our headquarters in Gainesville," says Arnold. "Three of our main Japanese suppliers are located here to support us, and this enables us to do complete production of every unit here. We also have lots of available land for future expansion; we built more production capacity into this new plant in case we need it."

Kubota is not alone in speeding up its Peach State path to expansion. All around the state, large multinational firms are ramping up sizable projects that are putting many Georgians to work and lining the revenue coffers of state and local governments.

Baxter, Starbucks, Caterpillar and Porsche are just a few of the global companies leaving huge footprints in shovel-ready sites around the state — and indications are that Georgia is poised to land a few more heavyweights before the dust settles on 2013.

Porsche is relocating 300 employees and creating another 100 jobs at Aerotropolis Atlanta, the site of the former Ford Motor Co. plant adjacent to Hartsfield-Jackson International Airport.

Reed says it's his mission to make Atlanta an even more attractive destination for global companies. In an interview with Site Selection, the mayor says that "we have the third largest concentration of Fortune 500 companies in America, and our level of international connectivity and transactions is unparalleled. Few cities can compete with us now. We are working to become the logistics hub for the Western Hemisphere. If anyone wants to know what our goal is, that's what it is."

The mayor adds that "we just opened our new $1-billion international terminal at our airport, and we now have seven of the top 10 leading air cargo carriers in the world. British Airways now bases its air cargo operations here rather than in New York City." 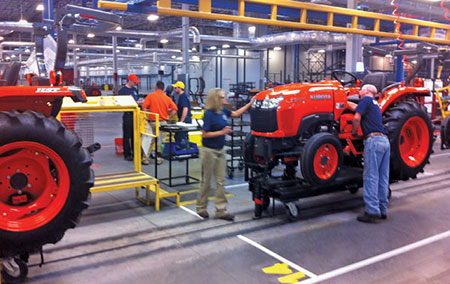 About 200 workers are being hired to assemble Kubota L-series tractors at the Japanese company's new $73-million plant in Jefferson, Ga.
Photo by Ron Starner

With published reports revealing that Volkswagen may be considering locating a 100-worker operations center at the Hapeville Aerotropolis site, Atlanta could be on the verge of becoming the automotive industry capital of the South.

The mayor would not confirm those reports, but he did say that "Atlanta is absolutely close to landing other large corporate deals. I know that because I am involved in four to six big deals right now. As we speak, there is an operation of 200 or more employees that is looking at Atlanta right now. Porsche is now here. Asurion has expanded here. Baxter is coming to our region [in nearby Newton County]. People are feeling very bullish on Atlanta. The official bird of Atlanta — the construction crane — has returned to the city."

Asurion, a Nashville-based technology firm, announced last year that it would locate up to 250 workers in a new software development center in Buckhead.

Baxter, meanwhile, announced the crown jewel of projects in Georgia last April, when it selected a site near Covington for a $1-billion manufacturing complex that will employ more than 1,500 people in a high-tech plasma fractionation facility. Commercial production at the 1-million-sq.-ft. (92,900-sq.-m.) plant in Newton County is slated to begin in 2018.

Carol Henderson, director of health sciences and technology for the Georgia Department of Economic Development, served as the state's lead project manager on the Baxter project. 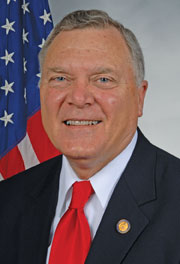 "Forty years ago, the governor of Georgia had the foresight to establish the first state trade office in Japan. We have seen the fruits of that labor come to pass."
— Georgia Gov. Nathan Deal

"Deloitte Consulting was hired to do a global site search for Baxter," she says. "The RFP first came to us in 2008, but the company remained confidential. The project then went quiet for a while. Later, in 2009, it became active again and we made the short list."

Henderson notes that Georgia "submitted six total sites to Baxter. The project came down to a couple of states in the U.S. Proximity to the University of Georgia in Athens and Emory University in Atlanta was a very important component. What really proved critical was access to the technical colleges in the area. They do their training at technical schools and on site. The state will build and own a training center on the Baxter site, and Baxter will be the first company to utilize it. That was a key asset that we were able to bring to the table."

Cooking Up Some Morning Brew

Not too far away, in Augusta, another multi-pronged effort helped Georgia land Starbucks Coffee Company's newest manufacturing facility. Code-named Project Luke by the Georgia Department of Economic Development, it would later be named Deal of the Year for the state in 2012.

"The main requirements for the project site were that it be close to a port, have long-term costs that are reasonable, be a ready-to-go site, and have a work force that is both available and trainable," says Susan Liberty, vice president of infrastructure and economic development for McGuire Woods Consulting, the lead consultant on the project.

Starbucks considered four states and then narrowed its short list down to two. "We conducted extensive site tours. The RFPs revealed the strengths and weaknesses of each site," says Liberty. "We came up with one preferred site in each state; having the state of Georgia coordinate all information and contacts from the sites around the state worked best for us. And, of course, cash and abatement incentives triumph."

Liberty adds that Starbucks was "very happy with the site we selected in Augusta Corporate Park. There was so little difference between the two finalist sites. It came down to natural gas prices." About $17 million in state and local incentives helped too. 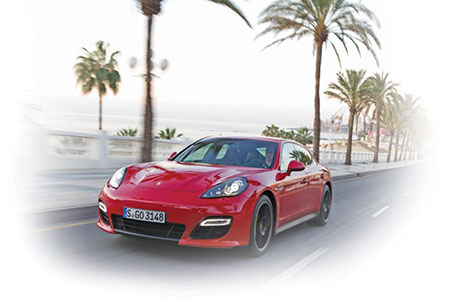 Georgia's other big win of 2012 was Caterpillar, which announced a $200-million investment in Athens on Feb. 29, 2012. That project was especially significant as it marked the movement of a plant back from Japan to the U.S.

"Number one, they chose Athens because we had the site and labor force," says Peggy Chapman, president of the Athens Chamber of Commerce. "The city and county are a consolidated government and worked closely together with the state on a united front to bring it to Georgia."

"QuickStart — Georgia's work-force training program — was very much a part of this deal," says Chapman. "Athens Technical College housed Caterpillar all this past year. They provided office space while the training facility was getting built. They have been training the company's first 58 employees the whole time."

Athens also won a $185-million investment last September from Ethicon, which is building a 100,000-sq.-ft. (9,290-sq.-m.) plant for the production of suture raw materials. The new facility will employ 75 people upon completion.

"Over the next several years, you will see suppliers come into this region to serve Caterpillar," adds Chapman. "This area has been very successful in recent years. From Gainesville to Jefferson to Athens, this region is attracting a great deal of interest."