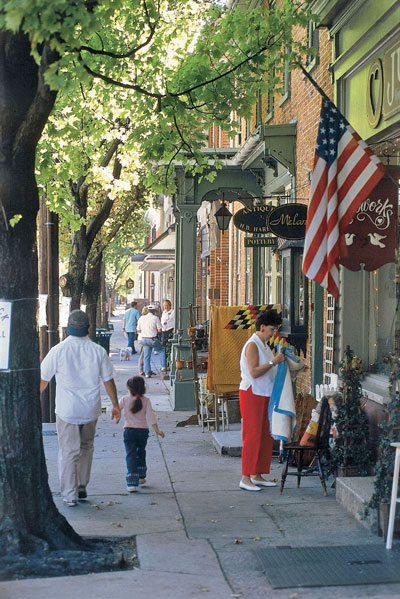 Founded in 1756 as a Moravian community, Lititz, a town of 10,000 in the Lancaster area, is known for its pretzels, its chocolate and, most recently, its 2013 ranking as "America's Coolest Small Town" by readers of Budget Travel. Lititz recently welcomed a $3-million expansion from Sechan Electronics, which designs and manufactures high-tech electronic assemblies and complex systems.
Photo courtesy of www.discoverlancasterpa.com

The Pennsylvania landscape is dotted with large opportunities.

f you're not familiar with Chambersburg, New Castle or Sayre, Pa., or have somehow missed the turns for Indiana, Sunbury, East Stroudsburg or Meadville, you might need to readjust your navigation settings.

Those are just a few of Pennsylvania's top-performing small town areas when it comes to attracting corporate facilities. Along with mid-size metro areas such as Lehigh Valley and Lancaster, they're shining proof that the Commonwealth's ample transport and work-force networks connect to plenty of opportunity for growth outside the big cities. In fact, just the communities named above have tallied nearly 100 projects since Jan. 2012.

Olympic Steel is investing $11 million and hiring 90 more people in Chambersburg, where the Ohio-based company operates two plate processing operations on 26 acres. The facilities, first established by Olympic in 1999, have direct access to two rail lines and three Interstate highways (I-81, I-76 and I-70), allowing orders to be quickly processed and shipped. Olympic operates 29 facilities in North America.

"Our partnership with Olympic Steel will result in a significant investment and the retention of jobs in Franklin County," said Pennsylvania Governor Tom Corbett. "I remain committed to creating a supportive business climate in Pennsylvania that encourages companies like Olympic Steel to continue investing and growing in the state." 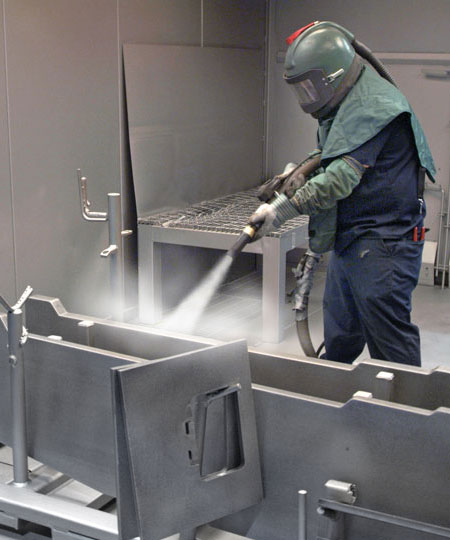 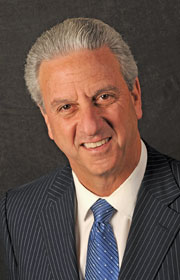 The firm considered expanding at its similar U.S. steel processing facilities, including two in Ohio. It ultimately selected Chambersburg to better serve East Coast customers, said the office of Gov. Corbett. The company received a $400,500 grant from the Pennsylvania Dept. of Community and Economic Development (DCED).

In April, Chambersburg got more good news, all the way from São Paulo, Brazil. That's where Gov. Corbett announced that Wipro Infrastructure Engineering, a hydraulic cylinder manufacturer, will establish a new U.S.-based manufacturing facility in Chambersburg that will create 74 new jobs.

"As Pennsylvania's chief executive and salesman, I am working nationally and internationally to strengthen Pennsylvania's position in the global economy and to create new economic and job creation opportunities," said Gov. Corbett. "Wipro, based in India with significant operations in South America, is a firsthand example of a global manufacturer that will call Pennsylvania home." 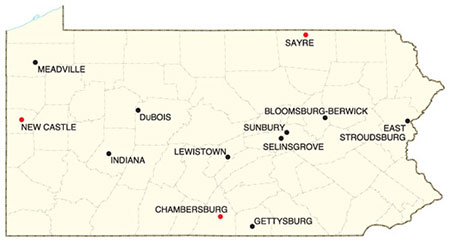 Twelve Pennsylvania communities were among Site Selection's Top 100 Micropolitan areas for corporate facility projects in 2012, and three were in the Top 10 (red dots on the map), helping the Commonwealth place fourth in the nation in most top micropolitan areas.

Gov. Corbett announced the project at a roundtable discussion with Volvo Construction Equipment (CE), which Wipro serves as a major supplier. Volvo CE recently relocated its Americas headquarters to its Shippensburg, Pa., campus, which is the company's only production facility in North America. Volvo CE inaugurated the $100-million expansion on March 21. In addition to new wheel loader production, the project brings to Shippensburg a customer center and a technology center. The big move follows a $30-million expansion completed in 2010.

Fingers On the Pulse

Back in March, even as colder weather still lingered, DCED staff rang in the early spring predicted by Punxsutawney Phil anyway, touring Northeast Pennsylvania's Main Street projects and business incubators and exploring tourism destinations and manufacturing operations. Continuing an "On the Road" series launched last fall in Erie, they participated in more than 50 events.

"DCED On the Road is a result of my commitment to transform state government from a roadblock to a partner with the private sector," Corbett said. "Working together, we can address the current needs of our businesses and partners to position Pennsylvania for long-term economic success."

One of those successes kicked off the journey, as Kovatch Mobile Equipment, a fire, emergency and commercial vehicle manufacturer which employs 600 at its headquarters campus in Nesquehoning, announced it plans to hire 100 new employees this year. The hires will support the Carbon County company's new product line — manufacturing water hauling tankers for police, fire and emergency services and the Marcellus Shale industry.

Saegertown, located just north of fellow micropolitan area Meadville near the Ohio state line, is welcoming a new $60-million, 74-job expansion investment from LORD Corp. The LORD plant is one of the key plants in the world that makes intermediate products shipped worldwide to supply the automotive industry. LORD, based in Cary, N.C., got its start in Erie in 1924. The company celebrated its 50th anniversary in Saegertown in August 2012. 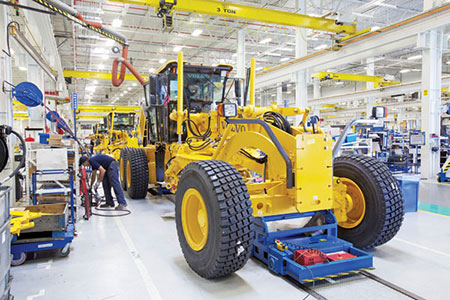 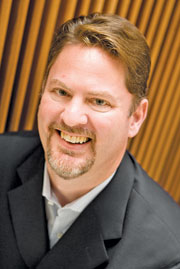 After multiple expansions and the relocation of the company's Americas headquarters to the site, Volvo Construction Equipment's campus in Shippensburg is now home to more than 1,000 employees from nearly 20 countries. "This should serve as a very clear signal that Volvo CE is committed to this market and in a better position than ever before to offer our customers products that are made by Americans, for Americans," said Volvo CE President Pat Olney (left).

The Lancaster MSA, with 33 projects in 2012, placed fifth in Site Selection's ranking of Top Metros with populations between 200,000 and 1 million. The Economic Development Company of Lancaster County and its EDC Finance Corp. helped spur over $69 million in local investment in 2012, including a move into town from Flex-Cell Precision, a CNC machining house that makes enclosures for electronic communications for the military and for implantable medical devices. Anthony Fanning, president of Flex-Cell, says his 30-employee company invested $1.1 million in the real estate purchase and improvements to the site, helped by an SBA 504 loan.

"The City of Lancaster has been very helpful in getting us permitted and inspected," he says. "The EDC was instrumental in getting the financing in place." A reduction in property taxes made the price right, "and the location and building size were perfect," he says. "It's a nice part of town and closer to most of our employees than the previous site."