Having critical suppliers in close proximity makes it easier for
global automakers to expand plants in regional clusters. 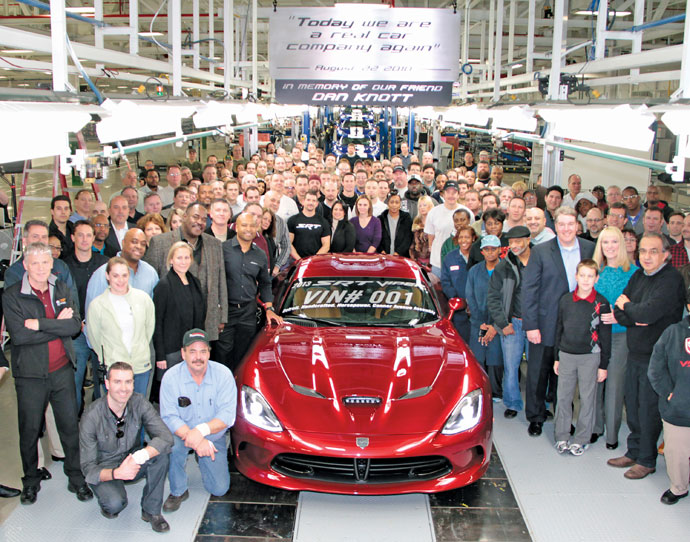 The first next-generation Dodge SRT Viper comes off the Chrysler Group plant assembly line earlier this year, about 14 months after the company announced it would reopen its Conner Avenue Assembly Plant in Detroit. The plant’s reopening brought nearly 150 high-skilled manufacturing jobs back to the city.
Photo courtesy of Chrysler Group
by RON STARNER
S

ome folks may be wondering why Michigan, Ohio and Indiana are winning a disproportionate share of automotive assembly plant investments these days.

If so, they need look no further than a new study of U.S. motor vehicle parts suppliers released in January by the Motor & Equipment Manufacturers Association (MEMA) in collaboration with IHS Inc.

The economic impact study shows that automotive parts manufacturers are the largest employers of manufacturing jobs (734,000) in the United States, and no one employs more workers in this field than Michigan, Ohio and Indiana.

In a highly competitive global industry where just-in-time delivery is critical to meeting customer demand, close proximity to the largest base of automotive suppliers is a game changer. The Upper Midwest delivers that access today.

According to the report, Michigan leads the nation in automotive supplier employment with 102,624 direct jobs, followed by Ohio with 89,423 jobs and Indiana with 79,651.

It is no accident, then, that in recent months these same three states have captured huge facility investments from Ford, General Motors, Chrysler and other global automotive companies.

And that's not all. GM also announced that it will increase its previously announced powertrain investments in Romulus and Saginaw, Mich., to $646 million — an increase of $46 million — to support production of GM's new V6 engine.

Add these projects to the recently announced expansions by Honda at its assembly plants in Marysville, Ohio, and Greensburg, Ind., and it's easy to see why industry experts are forecasting a resurgence of automotive manufacturing in the Midwest.

The Economist Intelligence Unit noted in a comprehensive global automotive industry report that the "U.S. auto industry is in a far stronger position" today thanks to shedding excess capacity in 2008 and 2009 and increasing sales since.

Bloomberg BusinessWeek, in an article about The Big Three, reported April 4 that "today, all three boast healthy bottom lines." GM achieved record profits of $9.2 billion in 2011, while Ford established a new third-quarter record in 2012. Chrysler, meanwhile, reported its best March numbers since before the recession.

With increasing sales comes the need to boost production at assembly plants, powertrain plants, and virtually every facet of the supply chain. Since automotive companies typically have little time to make these changes to meet fluctuating consumer demand, it pays to have all members of the supply chain in close proximity to each other.

Robert Wheeler, manufacturing communications manager for GM, says that "there is a wide array of factors" that go into the company's site selection process. "Proximity to suppliers is very critical," he says. "A lot of our key suppliers are already located around our existing powertrain plants. It goes hand in hand." 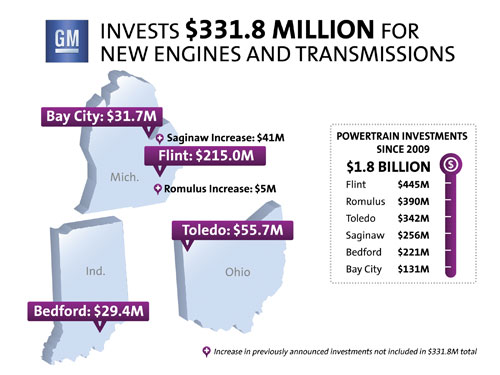 Wheeler adds that "you need to look at the logistics of getting the engines and transmissions and stamped parts to the assembly plants. Those powertrain plants are suppliers to another GM plant that is an assembly location, so you must have rail and really quick access to freeways. In the case of our powertrain facilities, almost all of them are right along I-75."

So are the key suppliers to those plants. The I-75 corridor serves as the backbone of the automotive manufacturing industry, not just in the Upper Midwest, but also in Tennessee and Kentucky — the two states that rank fourth and fifth, respectively, in automotive parts manufacturing employment.

Not coincidentally, Kentucky and Tennessee are reaping some major automotive plant investments too.

Toyota announced April 19 that its plant in Georgetown, Ky., will be the first-ever U.S. production site for the Lexus ES 350 model, the top-selling Lexus sedan in the world. The $360-million investment will create 750 new jobs. Toyota also announced that it will spend another $171 million to make various plant refurbishments in Kentucky. 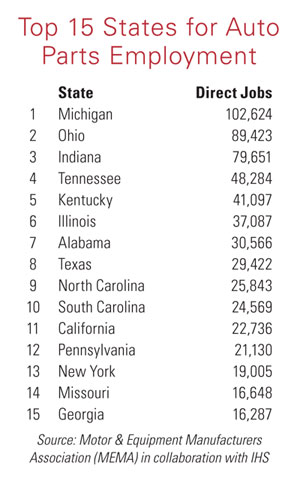 Nissan, meanwhile, admitted April 17 that it is considering adding another production site in North America to assemble models of its Infiniti luxury brand. Nissan currently builds cars at its plants in Canton, Miss., and Smyrna, Tenn., along with two plants in Mexico. Later this year, Nissan will open its third plant in Mexico — a $2-billion assembly plant investment in Aguascalientes.

Workers Act as Magnet for Plants

Matt Cybulski, a project manager for JobsOhio in Columbus, says that a talented work force was the main reason Ford wanted to invest in its Cleveland Engine Plant in Brook Park.

"Ford has a lot of choices," says Cybulski. "They have many plants in North America. They have been very pleased with their work force in Ohio. They have plants in Cleveland, Lima, Cincinnati and places in between. It was a testament to the work force in Brook Park that Ford selected this location for its investment into production of the EcoBoost engine."

Brook Park Mayor Mark Elliott says the deal came happened because "we have had a great relationship with Ford, both with management and the UAW [United Auto Workers]. It is a true partnership. They know that we will work hard for them and will support them."

Elliott says everyone in Brook Park recognizes that "we are competing against other Ford plants for this work. We are blessed with the autoworkers who make the finest automotive engine in the world. Working with the union and Ford management, we were able to cut costs and put ourselves in a competitive position. We consider ourselves very fortunate, because it could have gone elsewhere."