The 22-acre (9-hectare) West Campus will feature a 433,555-sq.-ft. (40,277-sq.-m.) building designed by Gehry Partners that Gehry partner Craig Webb said was toned down from Gehry's usual flair to make it "more anonymous." The building will be located above a surface parking lot with nearly 1,500 parking spaces. A tunnel under Bayfront Expressway will connect the two campuses. 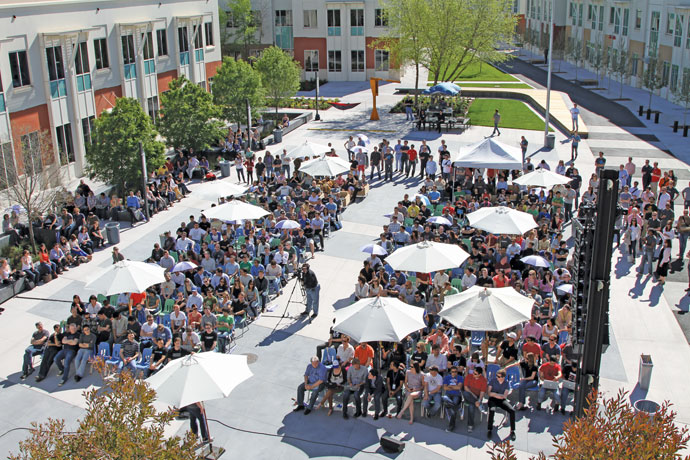 The courtyard of Facebook's Menlo Park existing East Campus includes Hacker Square, where employees gather each week for a Friday Q&A with CEO Mark Zuckerberg. But the question remains: Who's that in the hammock?
Photo courtesy of Pierre Morees/Facebook

Double Shot of Growth From GlobalFoundries

emiconductor company GlobalFoundries in March signed a lease for a 165,000-sq.-ft. (15,329-sq.-m.) building under construction at Irvine Co.'s Santa Clara Gateway campus in California, signaling the upcoming move of the company's HQ from Milpitas, and the relocation of up to 400 employees from Milpitas and Sunnyvale.

According to the Silicon Valley Business Journal, the company had signed a lease for 130,000 sq. ft. (12,077 sq. m.) at the campus in November 2012, but quickly realized it needed even more space. The new office will have a capacity of 750 when it's completed in late 2013 or early 2014. Irvine Co. was represented by CBRE, and GlobalFoundries was represented by Cresa.

Across the country, the company in January announced plans to build an R&D facility at its Fab 8 campus in Saratoga County, N.Y. The new Technology Development Center (TDC) will feature more than 500,000 sq. ft. (46,450 sq. m.) of flexible space to support a range of technology development and manufacturing 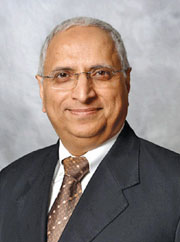 activities, including cleanroom and laboratory space. Representing an investment of nearly $2 billion, the facility will increase the total capital investment for the Fab 8 campus to more than $8 billion.

Construction of the TDC is planned to begin in early 2013 with completion targeted for late 2014. Since breaking ground on Fab 8 in 2009, the company has created approximately 2,000 new direct jobs and that number is expected to grow by another 1,000 employees for a total of about 3,000 new jobs by the end of 2014. 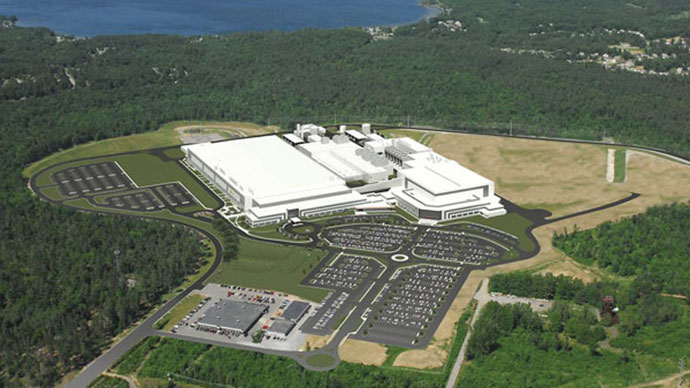 GlobalFoundries CEO Ajit Manocha (inset) says a new R&D facility at the company's fab site in Malta, N.Y. (rendering) will "help us bridge between the lab and the fab."
Photo courtesy of GlobalFoundries

"As the industry shifts from the PC era to a market focused on mobile devices, we have seen increasingly strong 1nterest from customers in migrating to advanced nodes on an accelerated schedule," said GlobalFoundries CEO Ajit Manocha. "To help facilitate this migration, we are making significant investments in strengthening our technology leadership, including growing our workforce and adding new capabilities to make Fab 8 the hub of our global technology operations. New York State's continued support of the semiconductor industry has created a strong collaborative ecosystem and helped pave the way for this additional investment. The new TDC will help us bridge between the lab and the fab by taking research conducted with partners and further developing the technologies to make them ready for volume manufacturing." ven North Korea realizes that Austin is an important city."

So said Texas Gov. Rick Perry in response to reports that North Korean leaders had included Austin in their nuclear missile attack plans. While he and others tried to nervously laugh off such threats, other reports and rankings continue to stream in this spring that place Austin at the top of some much nicer lists.

A new report from the Brookings Institution found that Texas leads the U.S. in job creation with Austin, Houston, Dallas, San Antonio and McAllen comprising six of the 14 U.S. cities that are creating more jobs now than before the recession. According to the report, Austin saw the highest percentage increase in jobs of any city in the nation. 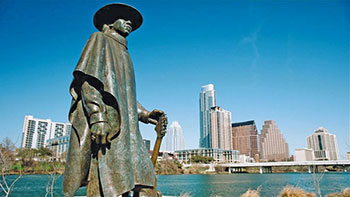 New rankings from Business Journals' On Numbers rating cities on their attractiveness to young men and women getting started in their careers placed Austin at No. 1 (see other Top 10 finishers below). The Small Business Friendliness Survey from Thumbtack.com and the Ewing Marion Kauffman Foundation found from responses from 7,000 business owners that Utah, Alabama, New Hampshire, Idaho and Texas rated as the top five friendliest states for small business. The top performing cities? Austin, Virginia Beach and Houston. Among the survey's other findings was that professional licensing requirements were 30 percent more important than taxes in determining a state's overall business-friendliness. 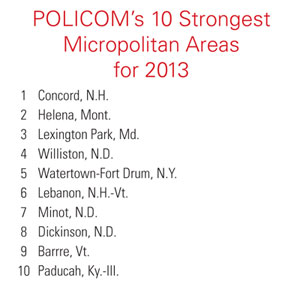 Moreover, this year's research revealed that 40 percent of U.S. small businesses are subject to licensing regulations by multiple jurisdictions or levels of government.

Finally, according to POLICOM's annual analysis of the nation's metro and micropolitan economies, 45 of the 69 community statistical areas in Texas improved their national rankings for economic strength. The state now boasts five metropolitan areas in the top 20, led by … you guessed it … Austin at No. 4 in the nation (see full Top 10 lists).

Helping the area grow even stronger was the March 27 announcement that Accenture would open a delivery center for software development and support, consulting and technology services in the Texas capital city, with plans to hire 300 by the end of this year. That would bring the number of Accenture employees in Texas to more than 5,000.

"Accenture has been growing in Texas for many years, and this expansion in Austin is being driven by our success in helping state health and human service agencies around the country leverage cost-effective, leading-edge technology to modernize their IT systems and improve productivity," said Stephen J. Rohleder, the Austin-based group chief executive of Accenture's Health & Public Service operating group. "We have worked with the state of Texas for over 30 years and Austin is key to our efforts to leverage technology and software to meet government needs."

MetLife to Hire 2,600 in North Carolina Among the amenities found in the Raleigh-Cary metro area is Raleigh City Plaza. The nearby and affluent community of Cary will welcome MetLife's global technology & operations organization.
N

orth Carolina Gov. Pat McCrory on March 7 announced that life insurance and employee benefits company MetLife, Inc., intends to create 2,600 jobs in Charlotte and Cary, North Carolina by the end of 2015. The company expects to invest, or cause to be invested, $125.5 million into its new Mecklenburg and Wake County campuses.

"These jobs will complement our financial services sector in Charlotte and our high-tech hub in Wake County, two distinct sectors we want to expand," said McCrory.

MetLife plans to establish hubs for its U.S. retail business in Charlotte and for its global technology & operations organization in Cary.

"We would like to thank Governor McCrory, Commerce Secretary [Sharon] Decker, Mecklenburg County, the City of Charlotte, Wake County and the Town of Cary for their partnership through this process," said Marty Lippert, Executive Vice President, MetLife. "North Carolina has much to offer our employees and the company," added Eric Steigerwalt, Executive Vice President, MetLife. "The strong sense of community in Cary and Charlotte, as well as the region's robust infrastructure and sustainable talent pool were all compelling reasons for coming here."

The project was made possible in part by an award from the state Job Development Investment Grant (JDIG) program and a One North Carolina Fund Award. Under the terms of the company's JDIG award, MetLife is eligible to receive up to twelve annual grants equal to 75 percent of the state personal income tax withholdings from the eligible new jobs created since the date of the initial award.

Over twelve years, the JDIG award could yield aggregate benefits to MetLife of up to $87.2 million. As much as $29.09 million in additional funds from the company's JDIG award could be added to the state's Utility Fund for infrastructure improvements in economically distressed counties.

oneywell in late February announced the company had signed a purchase agreement for a new global headquarters in Morris Plains, N.J. Honeywell is purchasing the Morris Plains property and buildings from McNeil-PPC, Inc., a Johnson & Johnson company. The company's decision is subject to approval of its application with the New Jersey Economic Development Authority (NJEDA) for state incentives under the Grow N.J. Assistance Program. The company expects the move of approximately 1,000 employees to the new site to occur in 2015.

"This site represents a terrific opportunity for Honeywell," said Rick Kriva, Honeywell's vice president of global real estate. "The new building can more than accommodate our current New Jersey employee base, allows for future growth, and will enable us to develop a truly world-class global headquarters while staying in Morris County and New Jersey."

The purchase agreement includes 40 acres (16.1 hectares) of land, a 475,000-sq.-ft. (44,127-sq.-m.) building complex, and a parking garage. Building retrofits will include Honeywell technologies that will allow for greater energy efficiency and enable the site to be a showcase for the company's building technology capabilities. Honeywell's Corporate Technology Center, Lab Operations, and Flight Operations will remain in their current locations.

Honeywell originally planned to stay in Morris Township, where its headquarters has been located for more than 50 years, and redevelop its campus as a mixed-use site with a combination of commercial, residential, and lab space. Honeywell's current 147-acre (59.5-hectare) property is underutilized with more than 50 percent of the campus unoccupied and its buildings outdated, inefficient and costly to operate, says the firm. Remaining in Morris Township had been predicated on both the approval of the Grow N.J. incentives and the proposed zoning changes, both of which were essential to making the project economically viable, Honeywell said. The original plan would have resulted in millions of dollars of capital investment, created hundreds of new construction jobs, generated millions of dollars in permitting fees and annual tax revenues for Morris Township, while preserving open space.

"We could no longer accept additional delays and uncertainty," continued Kriva. "After two years and more than 50 public meetings, the opposition's delay tactics and lawsuits bogged down the process and forced us to rethink our plans. The litigation has created a significant level of risk and uncertainty in the market, leaving us without a reliable and timely way to proceed in Morris Township. We thank Mayor Mancuso, the Morris Township Committee, and Planning Board for their efforts in supporting our plan for rezoning the site for mixed-use development, but given the continuing delays we had to move forward with what we believe is in the best interest of our company, employees, and shareowners."

Kriva said Frank Druetzler, mayor of Morris Plains, contacted the company as its re-zoning application for the Morris Township site slowed. "In Morris Plains, we found a great opportunity that's close-by, has more office space, and can be fitted with our technologies," said Kriva. "We thank Mayor Druetzler for his leadership and assistance."

Honeywell has re-filed its application with the NJEDA for incentives under the Grow N.J. Assistance Program to reflect its decision to move its headquarters to Morris Plains.