A corner of the country looks to overcome its limitations with talent and ingenuity.

by WILLIAM ATKINSON
B

usiness activity in New England in many cases is the equivalent of "musical states" or "musical cities." That is, while there is a healthy amount of new business and business expansion activity in the region, a lot of what is taking place is business consolidation and/or moving existing businesses from state to state or city to city.

The Navigator's Group, a specialty insurance holding company, announced that it is moving its corporate headquarters and additional operations from New York to Stamford, Conn. Long Island City, N.Y.-based Tunstall Americas announced plans to relocate its data and medical call center operations to Rhode Island, and add 250 more jobs over the next two years. Turfer Athletic, a supplier of outerwear and team apparel, announced plans to consolidate its Rhode Island and Massachusetts operations into a single facility in Warwick, R.I.

When looking at New England, two states that often get overlooked are New Hampshire and Vermont. Behind the scenes, though, a lot is happening in these states, as they each seek to attract certain types of businesses, using different strategies. 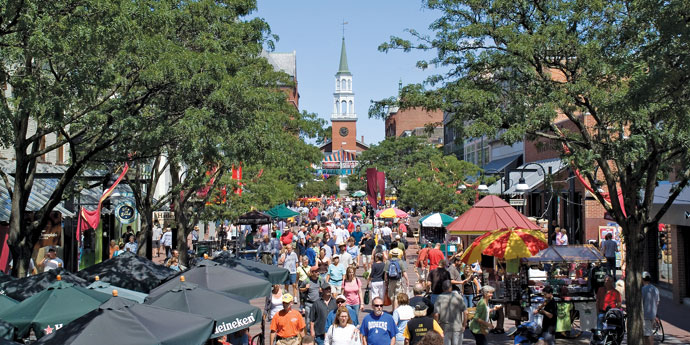 People flock to Church Street in Burlington, Vt.
Photo by Jeff Clarke courtesy of Vermont Dept. of Tourism and Marketing

While the two states' strategies differ, both seem to be working. Each year, POLICOM, which specializes in analyzing local and state economies, ranks the 366 metropolitan statistical areas and 576 micropolitan statistical areas in the U.S. for "economic strength" — the long-term tendency for an area to consistently grow in size and quality. This year, three of POLICOM's top 10 strongest micropolitan areas are in New Hampshire and Vermont: Concord, N.H. is No. 1, Lebanon, N.H.-Vt. is No. 6 and Barre, Vt. is No. 9.

"It's a myth that governments can provide 'free lunches' to business at no one's expense."
— Michael Bergeron, business manager, New Hampshire Division of Economic Development

"Small businesses are top-of-mind for lawmakers nationwide, but too often their needs are more a matter of conjecture rather than actual evidence," said Sander Daniels, co-founder of Thumbtack.com. "Some 7,000 businesses owners across the country have told us that they care about a lot more than just taxes — for most businesses, simple licensing regulations and helpful training programs are even more important to their success."

The survey this year found that professional licensing requirements were 30 percent more important than taxes in determining a state's overall business-friendliness. This year's research also revealed that 40 percent of U.S. small businesses are subject to licensing regulations by multiple jurisdictions or levels of government. As for health insurance, one-third of small business owners rated obtaining and keeping health insurance as "Very Difficult," versus only 6 percent who rated it "Very Easy."

"One reason is that the southern part of our state is only 45 minutes from downtown Boston," says Bergeron. The state wants to reach out to companies that think they have to be in Boston and let them know that New Hampshire provides a viable alternative, and a lot of the companies that look at Boston fall into these three categories. Employers in these three types of businesses also tend to provide very good-paying jobs.

What attracts businesses to New Hampshire?

"If a company is looking for state-subsidized giveaways, we're not going to be their first choice," says Bergeron. "It's a myth that governments can provide ‘free lunches' to business at no one's expense. Businesses end up paying for that one way or another. Our focus is that, if businesses are looking for a long-term low cost of occupancy, low taxes, less regulation, and an excellent labor pool, then we are the right choice."

One company which has located a plant in New Hampshire is Structal-Bridges, a division of Canam Group which manufactures bridges, structural steel components, steel decks and welded beams. Canam purchased the 248,650-sq.-ft. (23,100-sq.-m.) facility in Claremont in 2007.

"We wanted a plant here, because it is in the Mid-Atlantic region, which made it close to New York, Massachusetts, Connecticut, New Jersey and Pennsylvania," says Carmine Macchiagodena, general manager of the plant. "Also, if we need to service Ontario and Quebec, we are still within reach."

Since purchasing the facility, the company has upgraded it significantly to make sure it could meet its manufacturing requirements. "We have poured over $20 million into the facility since 2007," says Macchiagodena. "We have added new equipment and expanded the paint shop, and it is now one of the best paint shops in the industry, in that we can both metallize and paint."

The location does have one problem, though. While Macchiagodena says the quality of the work force is excellent, there aren't enough qualified workers.

"Since Claremont is such a small community, we have a smaller pool of employees from which to pull when we have production peaks," he says. Since the company is committed to safety and quality, it doesn't want to have to engage workers in excessive overtime, so it has to pull extra workers from as far away as Connecticut.

Still, though, the company plans to continue to expand.

"We are planning to pour several more million dollars into the plant this year in order to upgrade some of our equipment," says Macchiagodena. "Given the increased popularity and demand for metallizing, we may also expand our paint shop."

However, given the employee shortage, the plant may also begin to look at robotics in the next year or so.

A Label with Heft

According to Lawrence Miller, secretary of the Agency of Commerce and Community Development for the State of Vermont, the state focuses on attracting a wide variety of types of businesses, including tourism, higher education, agriculture (including value-added agriculture and food processing), manufacturing, technology, healthcare systems and operations, pharmaceuticals and renewable energy.

"We don't have a growth objective," says Miller. "Rather, we have a goal to improve the quality of life for all Vermonters, through an economic development strategy designed to improve wages and control the cost of living, housing availability and so on. Entrepreneurship is also critical in achieving this." 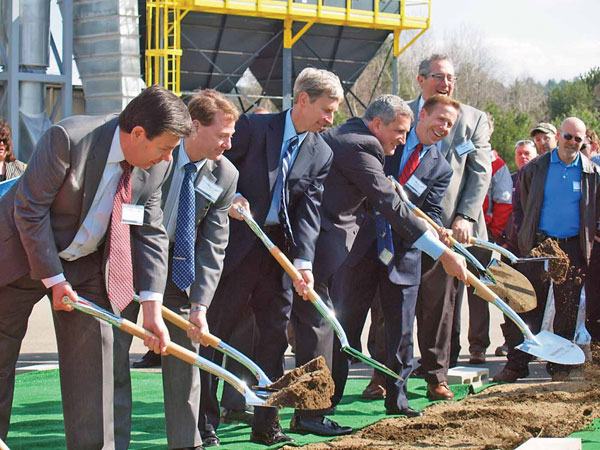 What does Vermont offer in order to attract businesses? "We provide easy access to a responsive regulatory environment," says Miller. "It is also easy for any business owner to get in touch with me, as well as the governor and other cabinet secretaries. We are able to work closely together to address specific business needs."

In 2008, Commonwealth Dairy made plans to open a Class II dairy in Brattleboro, and the first cups of yogurt came off the line in 2011.

"We selected Vermont for a couple of reasons," said Thomas Moffitt, CEO. "One was that it provides access to a milk supply in the northern part of the state."

However, the company elected to locate its business in the southern part of the state, which speaks to the second reason.

"The southern part of the state ensures us proximity to our customers, in that we have easy access to the major Interstate highways in this area," says Moffitt.

The company also has a branded yogurt product, Green Mountain Creamery, which it sells regionally throughout the Northeast. The "Made in Vermont" label has value-added significance, according to Moffitt, because customers in the Northeast tend to think of Vermont as the "dairy state" in that part of the country, just as people in the middle part of the country think of Wisconsin.

Commonwealth Dairy started out with about 40 employees and currently has about 110.

"We anticipate adding another 10 to 15 in the next year," says Moffitt.

A Few Words from Gov. Hassan

"Expanding the R&D tax credit is a critical component of our innovation agenda," Gov. Hassan said. "By doubling funding for the R&D tax credit, we can help more businesses develop in New Hampshire the new products that can lead to growth and job creation. Making the credit permanent will also help businesses who might need the credit down the road to plan ahead. 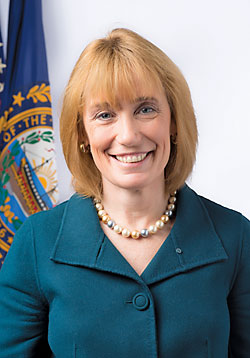 "This legislation is a shining example of the tradition of collaborative, bipartisan problem-solving that the people of New Hampshire expect from their leaders," said the governor. "Members of both parties, from both the House and the Senate, came together, shared thoughts and ideas, addressed concerns, and passed by overwhelming margins a common-sense measure to help businesses. By working together, we are sending a strong signal that New Hampshire is a state that welcomes innovation."

"As a manufacturer, we have to constantly upgrade our manufacturing methods and processes to maintain a competitive business," said Val Zanchuck, president of Graphicast in Jaffrey, a small business that develops graphite mold casting technology to produce precision metal parts for a variety of industries. "New product development and process improvements are our R&D. For us, this R&D does not take place in a laboratory, it takes place on the shop floor. The R&D tax credit helps provide resources that we reinvest to improve and accelerate these activities."

In addition to expanding the R&D tax credit, the governor's "Innovate NH" jobs plan focuses on building the best workforce in the country by making higher education more affordable and on providing businesses with technical assistance to help them create jobs.

Earlier this spring Gov. Hassan took time to respond to a few questions from Site Selection.

Site Selection: What goals do you have for New Hampshire's economic growth and development?

Gov. Hassan: New Hampshire stands at the threshold of a bright new future, as well positioned as any state to lead the country in innovative economic growth that will lift all of our people and define the 21st century. We are working hard every day to build the foundation for the stronger, more innovative economic future that will harness the greatness of our people and create good jobs that support a strong middle class.

It also begins to rebuild, based on the priorities that are critical for a bright economic future — economic development, higher education, public safety, health care and protecting our natural resources.

SS: What do you feel New Hampshire offers in the way of attracting business to the state that is unique — different from what every other state offers?

Hassan: New Hampshire has always been a special place to work, live and raise a family. The Granite State is well known for not having an income or sales tax. But our competitive advantage is not limited to not having a broad-based tax; it is also defined by our highly educated work force, accessible government, natural resources, high quality of life, modern infrastructure and strong communities.

We are consistently recognized as one of the safest, healthiest and most livable states in the nation and have one of the lowest poverty rates as well.

SS: Are there certain types of businesses that you are particularly interested in attracting?

We also want to help our existing businesses enter new markets and make New Hampshire a leader in selling our goods and services around the world.