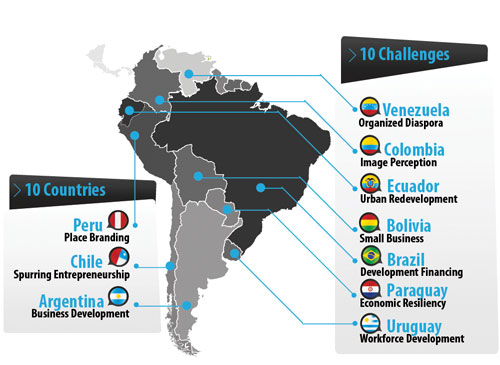 he following is a compilation highlighting unique initiatives taking place in every South American country, each with its own unique approach to common challenges faced by investment promotion agencies. Examples range from tactical — such as the Peruvian approach to place branding — to strategic, such as Colombia's effort to improve its image. There are also practical cases worth studying, including the Start-up Chile program, Ecuador's low-budget/high-impact approach to urban redevelopment, the rise of the Brazilian juggernaut known as the BNDES, and the Uruguayan high-tech approach to youth work-force development.

Some of these Latin American innovations could be imported into communities around the globe and adopted by other agencies charged with economic development in their locations.

In 2010 Chile won a place in history when its leaders invented one of the most innovative approaches to economic development of the century, announcing they would offer the planet's budding entrepreneurs $40,000 in seed money with the condition that they move to Chile to start their businesses.

Startup-up Chile was such a unique idea, it received an unprecedented amount of press coverage, and quickly began getting copied by other countries. The program has achieved its goal: The country has been able to leap ahead an entire decade of what would otherwise be an arduous process to create a thriving entrepreneurial ecosystem. More than 500 startups from over 51 countries have launched there, and an estimated 75,000 local Chileans have been positively impacted by their presence. The country has also seen the establishment of new venture capital funds. 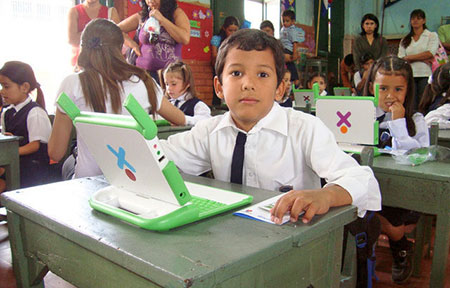 With a population barely over 3 million, Uruguay's leaders have always understood that they need to invest in their limited work force. Today they have the best professional workers in all of Latin America, but it doesn't stop there. Ten years ago they became one of the first backers of the One Laptop Per Child initiative, by making one of the largest purchase orders of Nicholas Negroponte's first-generation XO laptops. Today, each child gets a laptop the day he or she starts school; next year they will begin delivering tablets to first-year students. The effect this has had on an entire generation of young Uruguayans is impressively positive. The country finds itself today exporting education know-how to governments around the world.

A decade or so ago, Brazil decided to spruce up what was a relatively small Development Bank, the BNDES. Fast-forward to today, when it proudly claims to be the largest development bank on the planet. The bank has been instrumental in providing the low-interest financing that has allowed Brazilian firms to plow through Latin America via direct entry or acquisitions and become multinational players almost overnight. The BNDES has taken on concurrent roles of development bank, export-import bank, private equity investor, lender to foreign governments, and other roles.

Does this all sound like the BNDES is going to run into the same troubles that ended in ruin fofinancial institutions in the '90s and first decade of this century? It seems to be the other way around: In the 10-year period from 2001-2011, the BNDES grew its disbursements five-fold, while growing its net profits a whopping 11-fold.

What started as a couple of well-managed city-owned parking garages became in less than a decade the most profitable and sustainable recovery of a decaying urban center in recent history. When Quito's municipality embarked on this project, they did not have the deep pockets of the Asian or Middle Eastern nations (that have become emblematic for having built gigantic, and many times unsustainable, urban megaprojects). Quito's municipality took proceeds from a few parking garages and started giving $5,000 restoration loans to homeowners, and also established a small sidecar fund to incentivize businesses to relocate into the downtown area.

As the loans got repaid, the earnings were reinvested into more loans and the portfolio of successful projects continued to grow, until it ultimately attracted support from the Inter-American Development Bank, allowing the project to leapfrog, resulting today in one of the world's most successful restoration endeavors.

Quite possibly one of the best case studies of "Total Value" support comes from deep in the Argentinean countryside, at the heart of the Mendoza Wine Valley. Not only has the region organized to improve aspects of the supply chain, fulfillment, even R&D, making production better, faster and more competitive, the ProMendoza promotion agency has also taken business development to a whole new level, assisting the region's wineries in pursuing commercial opportunities in the global market.

Colombia
A 180° Shift in Image and Perception

No country ever has had the extreme dissonance between perception and reality that Colombia suffered for nearly two decades. While the situation was very bad in the '80s and '90s, the image that was painted of Colombia from abroad was far worse than the reality. And it still took Colombia nearly 15 years to turn the situation around, beginning with the government of Andres Pastrana in 1998 and with multimillion-dollar lobbying efforts in Washington to improve diplomatic perception.

This was followed by a public relations effort with the world's major news outlets in order to improve the coverage given to Colombia. Finally, another multimillion-dollar investment in recent years has gone towards marketing and advertising across several fronts, from television ads to tourism and trade promotion at all levels. The country is proof that anything, no matter how broken, can be fixed. Today Colombia is one of the hottest investment and growth markets in the world.

Many will agree that marketers' latest fad is experiential marketing. Brands across the globe are doing real-world presentations of their products in the form of tastings, parties and pop-up stores. Peru was able to capitalize on this and package something as intangible as a country brand into an actual product. The nation's highly successful experiential marketing campaign, which began as "Peru visits Peru," is possibly the most creative approach ever to place branding.

A tour bus with Peru brand Livery drove one day into a rural American town called Peru, Neb. The Peruvian bus crew spent several days filming while they performed Peruvian activities such as cooking food, playing music, making handicrafts, and demonstrating all forms of Peruvian folklore to the people of this small town. This helped set the stage for a successful Peru global brand campaign.

Bolivia
Building a Strong Base of Small Business

Bolivia is second only to Bangladesh as a world leader in microfinance. This may be because the fame of Muhammad Yunus and the Grameen Bank is so strong and prevalent. Because where Bangladesh has languished in terms of keeping up and evolving its microloans programs, Bolivia is trailblazing into the future.

A program known as IDEPRO has almost single-handedly created six sustainable sectors in Bolivia — not through consolidation into big industry, but rather by the close coordination and support of small businesses, where they have made sure through their lending power to make certain that buyer and supplier relationships along the value chain actually work. Two of the most successful sectors are timber and quinoa. The first is slowly turning around one of the world's most poorly managed forests; the second is becoming one of the most popular superfoods among health-conscious consumers in the developed world.

Paraguay
A Lesson in Resiliency

Among record breakers, the ultimate record-breaker is by far Paraguay, with an astonishing 14-percent GDP growth rate in 2010. After a century and a half of struggle to get back on track from a war on three concurrent fronts against Brazil, Argentina and Uruguay that wiped out the country's entire male population aged 18 to 55, Paraguay finally seems to be recovering and will hopefully regain the position it held in 1864 prior to the war: the most developed country in South America. The Paraguayan people are resilient and worth making a bet on.

Venezuela
A Diaspora Gaining Strength for the Return Home

Venezuela for many reasons has suffered a significant "brain drain" of skilled professionals.

These people have gone out and invested their capital and talents to create successful businesses in countries like the U.S., Panama, China, Singapore and neighboring Colombia, where a contingent of laid-off executives from Venezuela's state-owned PDVSA was rapidly absorbed, and there is a common agreement that this infusion of great talent was the detonating factor for this country's unprecedented contemporary oil boom. One thing binds all of these exiled Venezuelans in an incredibly strong manner: their deep desire to return to their home. The day that the political climate finally gets restored and the diaspora returns, this country will grow like no other.

Estuardo Robles is the founder of Americas IT Forum.