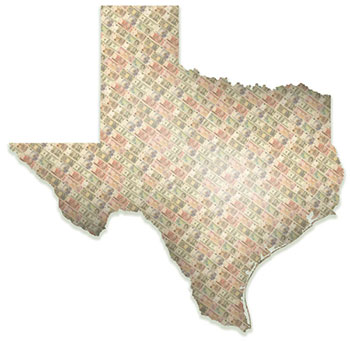 exas is two-thirds of the way to sweeping Site Selection's big three annual state rankings. It won the Governor's Cup earlier this year with a commanding lead in project totals for 2012, and it now claims the top spot in the magazine's ranking of the most competitive states. It just needs the top business climate designation to win the Triple Crown. That November-issue business climate ranking has put North Carolina ahead of Texas in most recent contests, but Texas is on a roll and may not be in the mood to cede that ranking to the Tar Heels in 2013. 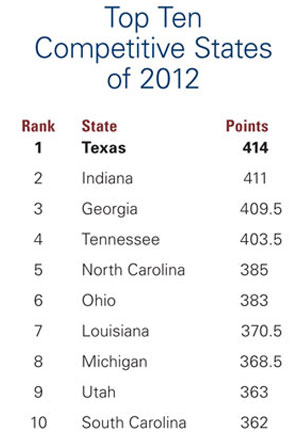 The Competitiveness Ranking here is a broader measure of state competitiveness than the number of announced projects, though that is a strong indicator of future job creation. It includes several New Plant Database criteria (see the index methodology sidebar), which reflect announced capital investment in total and per capita. It also includes other gauges of states' strength, such as the number of National Career Readiness Certificates according to the Workforce Development Division of Atlanta-based ACT, administrator of the Certified Work Ready Communities initiative. 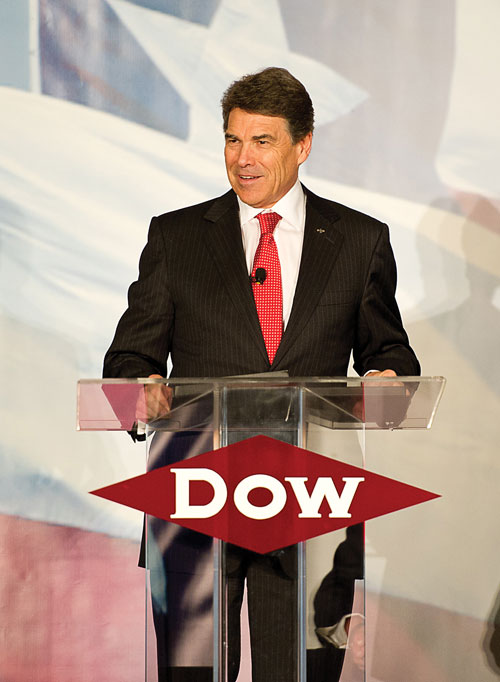 G ov. Rick Perry announced in April 2012 that Dow Chemical Co. will create 150 new jobs and $1.7 billion in capital investment with the location of a hydrocarbon cracker in Brazoria County. The state invested $1 million through the Texas Enterprise Fund (TEF) to close the deal on this project. "When it comes to attracting jobs, the Texas Enterprise Fund may help close the deal and provide the final piece of the puzzle, but it's Texas' growing reputation as the country's best place to build your business that puts us in the running in the first place," Gov. Perry said. "This announcement is great news for Texas, and even better news for the people who will eventually work at this new facility thanks to this TEF investment." The new ethylene cracker will process natural gas and natural gas liquids to create ethylene, to produce plastic resins and other chemical intermediates used to manufacture a variety of materials including transportation, building and construction, infrastructure, wire and cable, medical devices, personal care and food packaging.

This will be Dow's largest ethylene cracker worldwide, and will use U.S.-produced shale gas and natural gas liquids.

Following are the criteria used to arrive at final scores determining the competitiveness ranking of the states. The first six criteria are based on project data resident in Site Selection's New Plant database.

If readers are unfamiliar with this program, that will likely soon change. ACT is in the midst of a national effort to encourage states to gather and report data that will help them better address skills gaps that may exist — and that will better reflect to site selectors states' true work-force pros and cons. Thanks to work being spearheaded at ACT by Debra Lyons, vice president, community and economic development and work-force development, this data will one day give site selectors an invaluable new tool for taking the temperature of state labor pools, and Site Selection is grateful to include some of that data in its annual ranking of state competitiveness. Watch for more on this topic in future issues of Site Selection.

Meanwhile, back to Texas, whose business climate attributes are well documented in these pages and elsewhere. Since publication of the Governor's Cup cover story in the March issue, Gov. Rick Perry and his economic development team have hardly rested. Runners-up Indiana, Georgia, Tennessee and North Carolina are not far behind Texas, and Gov. Perry intends to stay ahead of the pack. On "Tax Day," April 15th, he announced a four-point plan to provide nearly $1.6 billion in tax relief to all Texas businesses currently subject to the state's franchise tax. The governor was joined by lawmakers, the Texas Association of Business (TAB), National Federation of Independent Business (NFIB) and Texas Conservative Coalition Research Institute for the announcement.

"By cutting taxes for Texas businesses, we are helping job creators in our communities and promoting economic growth across the state," Gov. Perry said. "Businesses that keep more of their money can pass savings on to consumers, hire more workers, offer greater employee benefits or reinvest it into their companies and grow their business — all of which are good for Texans and our growing economy."

Gov. Perry's business tax relief plan would also have the effect of making permanent the current small business tax exemption. That exemption currently impacts 29,000 businesses and is set to expire in 2014.

"Business is the economic engine of our state and Gov. Perry's plan will only serve to fuel that engine," TAB President Bill Hammond said. "Government doesn't create prosperity, business does. By reducing the tax burden on Texas businesses, businesses will keep hiring more workers, reinvesting in their companies and driving the economic success of our state."

"Gov. Perry's tax relief proposals will go a long way in helping entrepreneurs and smaller businesses grow during this period of economic recovery," NFIB Texas Executive Director Will Newton said. "These four specific points demonstrate an understanding of the kind of relief small business owners have said they want. We applaud the governor's willingness to prioritize economic development and provide relief to our state's job creators."